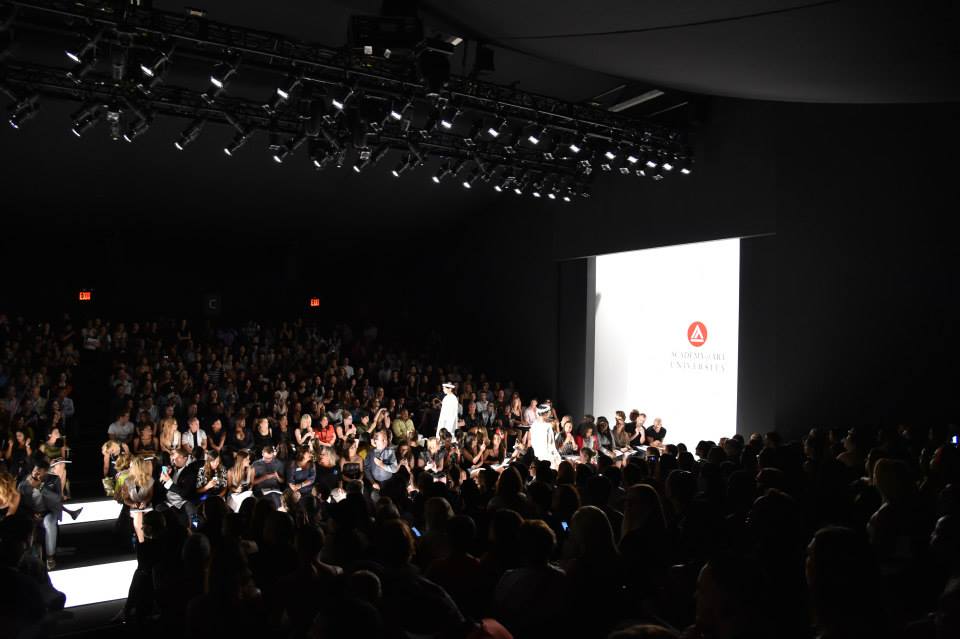 As 2014 draws to a close and we ready ourselves to welcome a new year, we can’t help but reflect on all of the successes the last twelve months have brought. From stunning runway shows in New York and San Francisco to inspiring guest talks by industry insiders, 2014 was a great year for the School of Fashion.

Let’s take a walk down memory lane to relive some of the biggest milestones of 2014, and join us in looking forward to a new year filled with great talent and even greater fashion!

Every designer dreams of showing their collection at Mercedes-Benz Fashion Week, and on Friday, February 7, 2014, that dream came true for 13 designers from the School of Fashion at Academy of Art University. For the Fall 2014 season, 13 designers presented eight collections, four of which were collaborations between Fashion Design and Textile Design students. In total, six womenswear and two menswear collections were presented at the Academy of Art University Mercedes-Benz Fashion Week show.

On Thursday, May 8, 2014, 30 student designers’ hard work was realized as they saw their collections walk the runway at the annual Academy of Art University Graduation Fashion Show and Awards Ceremony. In addition to showcasing student work for this year’s Guests of Honor – Rosita Missoni, Angela Missoni, and Margherita Maccapani Missoni- the fashion show introduced 20 collaborative collections of these BFA students who studied Fashion Design, Knitwear Design, Technical Design, Textile Design, and Jewelry and Metal Arts, to some of the most influential members of the fashion world. 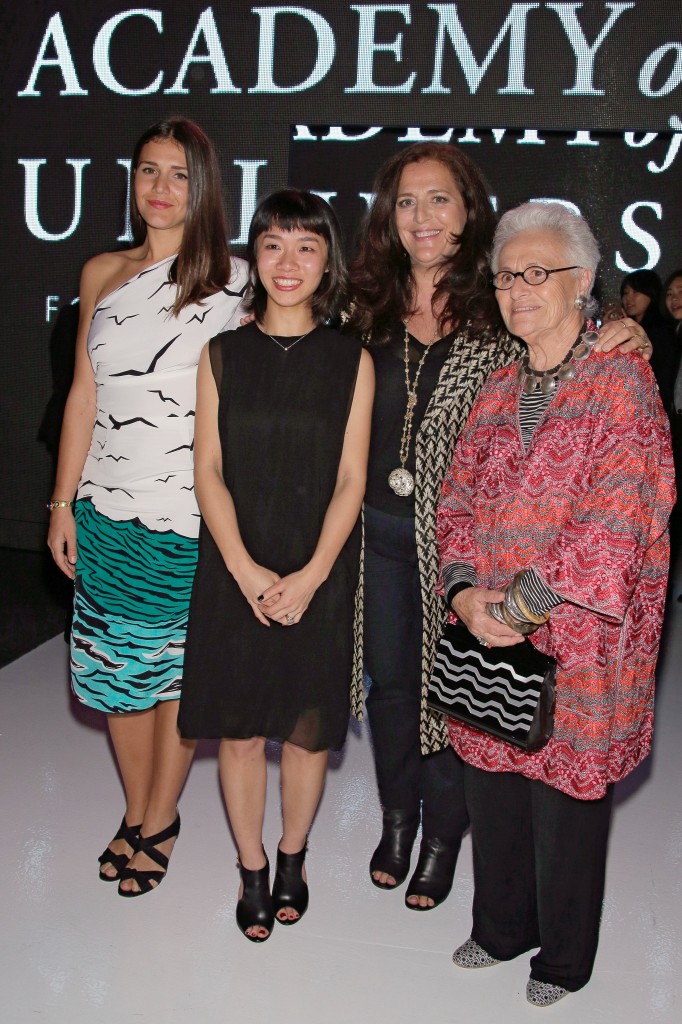 During their visit, Rosita, Angela and Margherita spent time seeing classrooms, viewing student work, and took part in a discussion with Suzy Menkes, International Vogue Editor of Condé Nast, and moderated by Gladys Perint Palmer. The conversation touched on the Missoni brand’s success as a family business, the way that the Missoni lifestyle has shaped the company, their fashion inspiration, and even some insights into the family dynamic.

In addition, the guests of honor awarded BFA Fashion Design student Yuko Okudaira, whose work appeared on the Graduation Fashion Show runway, an internship with Missoni in Milan, Italy.

In May of 2014 the School of Fashion Merchandising program created a temporary guerrilla store called SHOP. The store, which was open between May 20-31 and housed within the Academy’s annual Spring Show, featured products donated by prominent San Francisco brands including Levis, UNIQLO and Banana Republic which were then  customized by Design, Textile and Merchandising students. These one of a kind creations were on sale alongside current collections from Academy of Art University School of Fashion alumni Mansoor Scott, Frida Salvador and Tommy Pham. BFA Product Development classes also created additional unique items including safety pin jewelry, fortune cookies with KidRobot toys and custom tote bags to build an eclectic assortment of merchandise.

Simon Ungless named Executive Director of the School of Fashion 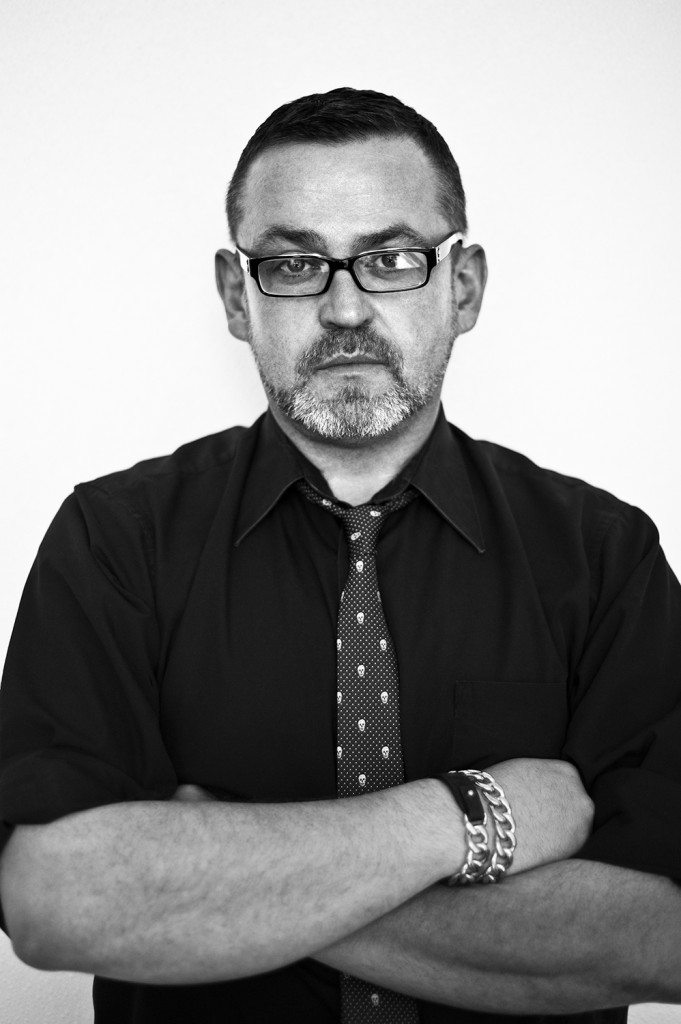 The 230-page magazine included 21 articles and editorials that highlighted the work of Academy students and alumni. The topics ranged from Architecture students collaborating with a Fashion Merchandising class on a project that focused on “nomadism and identity,” to the profiles on MFA Fashion Design graduates Maria Korovilas, Kara Laricks, and Shoshana Pinedo, which displayed the international nature of the student body.

With the launch of issue seven, the University was pleased to announce the accreditation of the new Jewelry and Metal Design program, the MA and BA Fashion Journalism programs, and the BFA Fashion Styling program. The latter being the first accredited Bachelor’s degree in Fashion Styling in the United States.

On Saturday, September 6, 2014 12 designers from the School of Fashion at Academy of Art University were lucky enough to see their work appear at Mercedes-Benz Fashion Week. Since 2005, the School of Fashion has premiered the collections of students and recent graduates during New York Fashion Week. For the Spring 2015 season, 12 designers presented six collections; in total, five individual womenswear collections and one collaborative menswear collection were presented.

Just a few hours before the Academy’s Mercedes-Benz Fashion Week show, the School of Fashion held their very first fashion symposium at The New York Public Library for the Performing Arts. Keanan Duffty, Senior Director of Fashion Merchandising, talked with internationally renowned fashion photographer Nigel Barker to share both of their valuable insights and experiences in the fashion industry.

During fashion week Supima, a non-profit organization, held its annual Supima Design Competition dedicated to promoting the use of Pima cotton. Committed to giving young talent a chance to show their work on the runway, Supima chose six senior college students to create collections and compete at a runway show at Mercedes-Benz Fashion Week in New York City. From Academy of Art University, Jenny Hoang, BFA Fashion Design alumna, was selected to create a collection and compete for the $10,000 prize. Raised in Ho Chi Minh City, Vietnam, and Oregon, Hoang is a former CFDA Award winner. She presented unique pieces which she describes as “feminine yet powerful and fierce.”

On Wednesday, September 24, 2014, Joe Zee, newly appointed Editor-in-Chief of Yahoo! Style led a discussion at the Academy of Art University with Simon Ungless, Executive Director of the School of Fashion, members of the press and about 75 Fashion Journalism and Styling students. Zee chatted with students about the progression of his career, shared tips for industry success, and  talked about the ways in which the digital age are changing journalism for good.

On November 11, 2014, the Academy of Art University School of Fashion Graduation Fashion Show was  named as the No. 1 San Francisco Fashion Industry Event in BizBash’s inaugural Top 100 list of Annual Events in San Francisco. BizBash’s widely renowned Top 100 list includes annual events that are evaluated based on economic impact, buzz, innovation, and the event’s prominence within the communities it intends to serve.

Stay tuned to read about all of the great things  School of Fashion students are sure to do in 2015. Happy New Year!