On Wednesday, May 24th 2006, the Academy of Art University in San Francisco honored the ‘Men of Fashion’ and presented the School of Fashion graduate collections of the Class of 2006 in the historical Morgan Auditorium. President Dr. Elisa Stephens hosted the occasion and presented honorary doctorates to Alexander McQueen, Christophe Girard, Robert L. Mettler, and Wilkes Bashford. In addition to receiving their honors, these noted ‘Men of Fashion’ selected graduate stars for internships and honors. 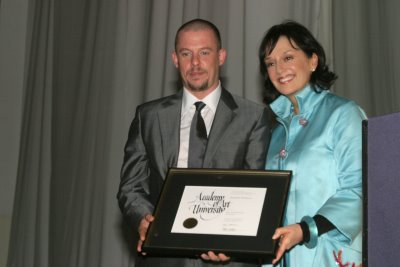 Alexander McQueen, celebrated fashion designer, whose numerous awards include CFDA International Designer of the Year and Commander of the Most Excellent Order of the British Empire by Her Majesty the Queen, received his honorary doctorate and thanked our own Simon Ungless, Director of Graduate Fashion, as Ungless collaborated with McQueen on eight collections before joining the Academy of Art University. “I think I owe a lot of thanks to Simon Ungless who I was at St. Martins with,” said McQueen. “We studied together at St. Martins about 15 years ago. We actually started off working on prints. I am a bit jet lagged but it’s worth it. I’m just very honored.” 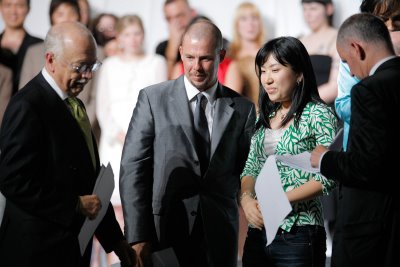 Christophe Girard, Deputy Mayor of Paris Responsible for Culture, and Director of Fashion Strategy of the LVMH Fashion Group, one of the biggest fashion conglomerates internationally, is also an award-winning producer of documentaries, a tireless AIDS activist, Greenpeace member, and even lived in our beloved city of San Francisco in 1977. 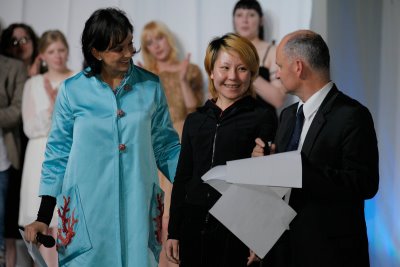 M. Girard also selected three graduates based on their portfolios that he viewed during the Static Exhibition before the show and whose collections were not on the runway to also intern at LVMH in Paris. He announced to the audience and the three graduates that he would “have to find a way” but would “work it out for 2007.” The three are:
o Pablo Fernandez, a MFA Fashion & Knitwear Design graduate who will showcase his graduate menswear collection with his fellow MFA graduates during September 2006 New York Fashion Week in the IMG / 7th on Sixth Bryant Park Tents.
o Adrian Chang, BFA Fashion Design graduate.
o Soraruk Tikaphanya, BFA Fashion Design graduate. 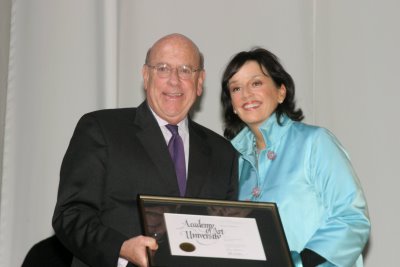 Robert L. Mettler, Chairman and CEO of Macy’s West, is a 30-year retailing veteran who served as Sears, Roebuck & Co.’s President of Merchandising for all full-line stores, President and CEO of Robinson’s in Los Angeles, as well as in various positions with Allied Stores Corporation and May Department Stores Company.

Mr. Mettler chose collections to be showcased in the 24th Annual Macy’s Passport Fashion Extravaganza: an evening of fashion and compassion to be held in both San Francisco from September 19-21 and Los Angeles on September 28 and 29. Passport has raised nearly $22 million to date. This is the School of Fashion’s 2nd year of involvement.

“At Macy’s, we’re always looking for what’s new and fresh in fashion” says Mettler. “We’re proud to support the School of Fashion’s up-and-coming designers who exemplify the creativity and innovation that Macy’s encourages and personify the future of fashion. These students pour their hearts into their work, and will go on to do great things in the exciting world of fashion.” 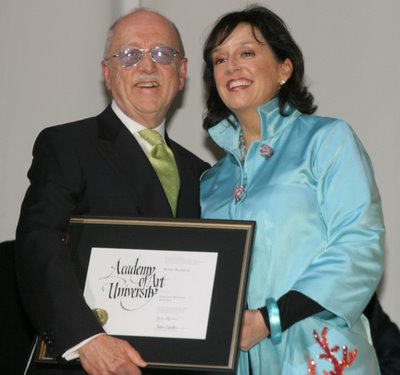 Wilkes Bashford, the man who “made Sutter Street” with his successful flagship store, is hailed by Esquire as “The Most Important Men’s Fashion Specialist in the Country.” His awards include Cutty Sark Award for the Best Men’s Store, Uomo Moda Collections Award for Italian Menswear in America and the International Best Dressed List Hall of Fame. 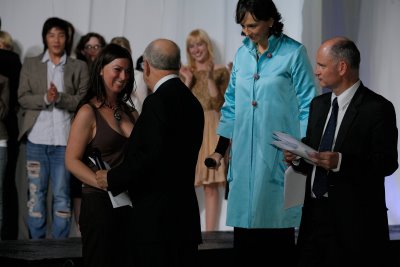 After viewing BFA Fashion Design Graduate Yana Galbshtein’s collection of wearable elegance, Mr. Bashford chose her to intern at KITON in Naples, Italy for three months where she will work in both men’s and womenswear.