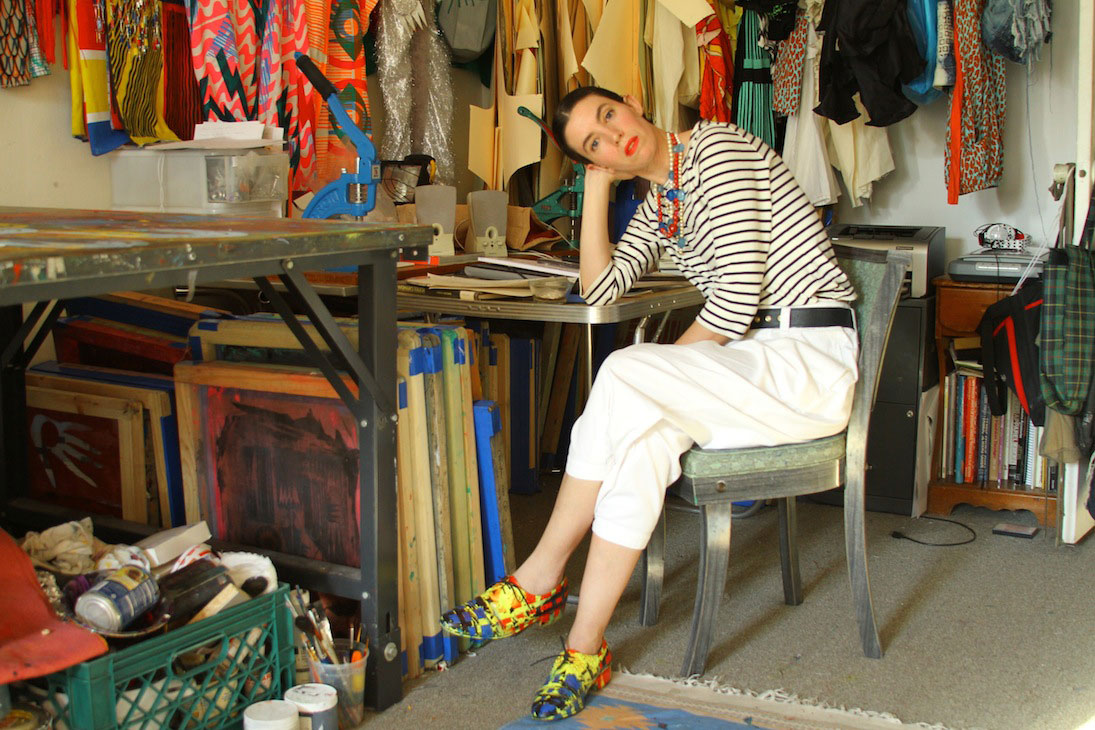 Keanan Duffty talks to designer Christian Joy, who is best known for the stage costumes she designed for Yeah Yeah Yeahs lead singer Karen O. Joy uses found articles, and occasionally eschews thread and printed textiles for glue and marker pens. She has influenced contemporary fashion with punk and DIY styles. In 2007, her costume designs were featured at the Victoria & Albert Museum in London as part of the New York Fashion Now exhibit. In 2008, Joy took on dressing UK-based band The Klaxons, persuading them to give up their trademark neon outfits. She also collaborated with TopShop on three limited-edition collections and released her first personal ready-to-wear garments.

Keanan Duffty: What was the first record that you bought and how did it change your life?

Christian Joy: My uncle actually bought it for me, and it was U2 “The Joshua Tree.” I grew up in a born-again Christian family and we weren’t allowed to listen to rock music, but I somehow convinced my mom that U2 were Christians. I was U2 crazy after that, and really just crazy for music in general. It really gave me a lot of confidence to be my own person and to seek out new ideas.

KD: You started your career with no formal training in fashion design, and yet have had a big effect and influence on mainstream fashion. Do you think it benefited you to come into the fashion business without ‘going through the system’?

CJ: Yes, I think I felt like I could create without any real limitations. No one was telling me how to do things so I just kind of invented them on my own. I do think, however, that I would have benefited from some sort of business knowledge or just a knowledge of how things are run. But creatively I’m glad I did it on my own.

KD: In 2009 Christian Joy costumes were featured in a ‘Where The Wild Things Are’ pop-up shop in Los Angeles. Any plans for further costume design for movies?

CJ: Not so far. I’d definitely be into designing for film though.

KD: Tell me a little about your collaboration with TopShop.

CJ: My collaboration with TopShop basically came up through a friend of a friend. I always felt like I wished I would have done something a little bit more over the top for it, but I think in my mind I was thinking, “Oh this needs to sell so I should make it simple.” Actually, the dresses I sold were a variation of some dresses that I had already made and sold here in NY; they did really well so I figured why not.

KD: How do you think online, e-commerce and information exchange is influencing fashion/anti fashion?

CJ: It just all becomes more accessible, which is good and bad. I liked feeling like a bit of an outsider growing up and wearing clothes that people thought were weird. You had to really take the time to create your own style—plus you knew who your allies were just by the way they were dressed. I guess now the Internet is blurring the boundaries, it makes it classless. Now everyone can be in style, which I guess gives people confidence. I hate using the word hipster, but it really does define a look and you can find people wearing that look all over the world. I feel like there aren’t as many small fashion sects anymore.

My husband grew up in San Francisco in the 80s. He recalled going to a Smith’s concert—at the time he had long hair because he also liked Metallica and was influenced by their look—where he was physically threatened by new wave kids who didn’t like his long hair. I kind of like the fear in fashion. I like that someone would feel threatened by the way someone dressed. I think as much as I love the accessibility of information now, I don’t like the way it has homogenized everything. It’s boring.