On Our Radar: TV Girl 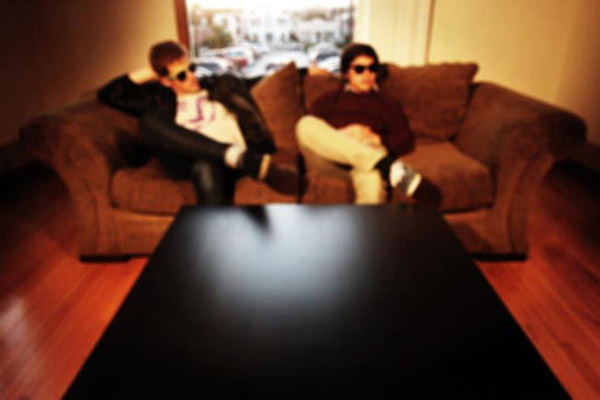 Brad and Trung of TV Girl. Photo by Justin Smith.

Sitting down outside, the waitress rounded the table with large Asahi beers and carafes of hot sake. It was one of those warm, sticky evenings and everyone else in the restaurant was preoccupied with the London Olympics rather than the people or the meal in front of them. An entourage of young men sat with me, cracking jokes about the raucous table next us – which included a Marine who was passed out on the table.

Finally pulling ourselves away from the evening spectacle, I got down to talking with Brad and Trung, who comprise one half of the popular Southern California indie-pop group, TV Girl.

Can you name some musicians you look to for inspiration?
Brad: All the big ones: Leonard Cohen, Bob Dylan…
Trung: Beatles, Beach Boys. Currently though, the best people out right now are St. Vincent, she’s really cool. The all around sound, style aesthetic, music videos.
Brad: Yea, we can all agree on that. She has very good tension between ugliness and prettiness, which always makes for good music, I think.
Trung: And you can’t say that about a lot of people. But other than that there is no like modern, other people… Mhmm, Chris Owens, of Girls, who’s also very influential. In a way that he’s also doing what we do, which is a throwback 1960’s pop thing.

Wait, so how do explain Brad’s bleached blonde hair? Why did you do that?
Brad: I was watching a skate video of Jason Lee and he had bleached hair, so I wanted to too. Do you like it? I’ve gotten multiple comments that it looks horrible…
Trung: I think it looks terrible.

Maybe if you dye it a color…
Brad: Yeah, I’ve tried doing that, I had to shave my whole head it ended up looking so bad.
Trung: Well, that is because you did it wrong.
Entourage: Its Slim Shady man. It’s very Green Day, it makes you look like 12 years old.

The two formed the group in 2010 on a whim during a sweltering, newly post graduate, San Diego summer. Brad sent Trung a few demos that ended up being the first three tracks on the TV Girl EP. Their internet-hit single about a sloppy drunk girl encounter, “If You Want It”, stirred controversy with Warner Bros. and raised interest on blogs like Pitchfork.com and The Hype Machine.

About that 1960’s pop thing…You guys sampled a Todd Rundgren song, “Hello It’s Me”, on your song, “If You Want It” and I know it caused some trouble for you guys. How has that affected your music?
Brad: We didn’t really think about getting into any legal situations at first because we weren’t popular, but then we started getting a little bit of heat. Now we’re in the position where we’re probably not going to use samples anymore.
Trung: Our last record [a mixtape -The Wild, The Innocent, The TV Shuffle] that we made is sort of like our farewell to sampling in many ways because…Well 1) because we’ve been doing it for two years, and 2) we kind of want to try other types of music. The only reason, we got in trouble is because we tried to get the sample cleared.
Brad: Sampling is kind of limiting in a way to write songs.

They haven’t looked back since completing the record, but have added a couple more musicians (Jason Wyman and Joel Williams a.k.a. Kynan) to fill out the band, moved to Los Angeles and played SXSW Music Festival.

How’s it been since you moved from San Diego up to L.A.?
Trung: Umm Drew Barrymore was at the restaurant across the street [from our house]

Oh shit…
Brad: Yea, so how does that answer your question? And Emile Hirsch, you like Emile Hirsch?

After the sake has run out, the table shifts as discussion turns to the hardships of the just completed Wild Innocent tour, which took them across America in a white van. “Vanna White, broke down. We had to spend $500 dollars to get her fixed.” The band explains the acquisition of old “Vanna” thru a Kickstarter for campaign for their “Vanstravaganza – which allowed them to use social media to raise money for a tour van.

How is new technology changing music?
Trung: It makes it a lot easier because anyone with garage band can sequence a synth line and make it sound professional. With the right timing you can really blow up, and a lot of artists have.
Brad: I don’t know – I think it’s sort of a good and bad thing. I mean it’s probably mostly a good thing. People should be able to create music, and the fact that its easy, and makes it easy for people to express themselves when they don’t have the resources is a good thing. But it does make it more ephemeral in a way. Where I feel like back in the old days because there was less music to go for it was more a shared cultural experience.
Trung: And the bad part of it is, is you kind of just get jaded. There’s just so much shit, you don’t listen to anything anymore. I only listen to the stuff that’s reported about because it’s easy to find. It’s hard to sift through all the shit because they’re just so much. I think that’s a downside to technology making it easy for people to do something that sounds professional.

On a more personal note, if you could be any animal, what would you be?
Trung: A penguin
Brad (quick response): Beaver
[Table laughs.]