Today’s Monday Morning Photos come from another time – 1940 to be exact. The photographs were taken while this famous figure was on vacation in San Francisco and included in a letter to the person’s family back home. It is so fascinating to see San Francisco as it existed over 70 years ago – what has changed and what hasn’t. Be sure to scroll all the way to the bottom to find out who is behind these delightful musings!

Arrived in Oakland a few hours ago and finally we’re on our way to San Francisco.

We paid 25 cents at the Toll Plaza to enter this wonderful bridge that was opened four years ago. It took me awhile to get used to the traffic! 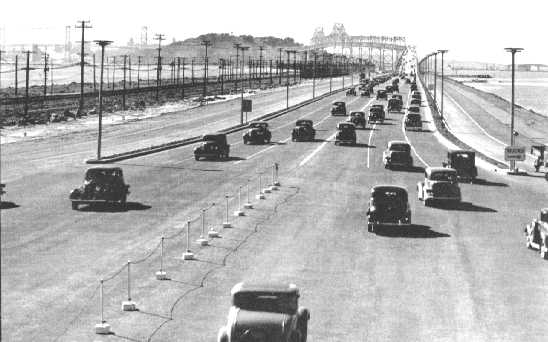 The bridge has two decks. The top deck is for automobiles and the bottom deck for trucks and electric trains. You can see the tracks at left. The trains are run by the Key System and Southern Pacific. They can take you all over the East Bay to wonderful places like Neptune Beach in Alameda. 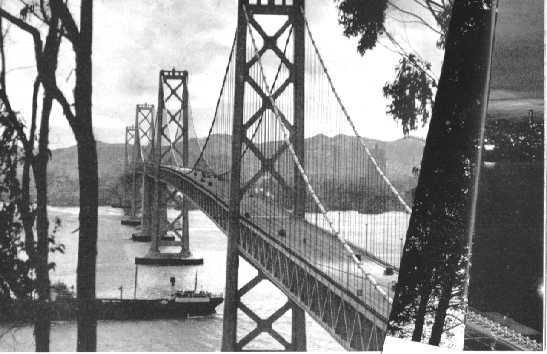 We have just passed through the Yerba Buena Tunnel and can finally see San Francisco in the distance. Notice that the traffic has thinned out. Many of the cars got off the bridge at the island to go to the Golden Gate International Exposition on Treasure Island. The fair opened last year and will close for good later in 1940. I’m going to try to go there.

Top Of The Mark 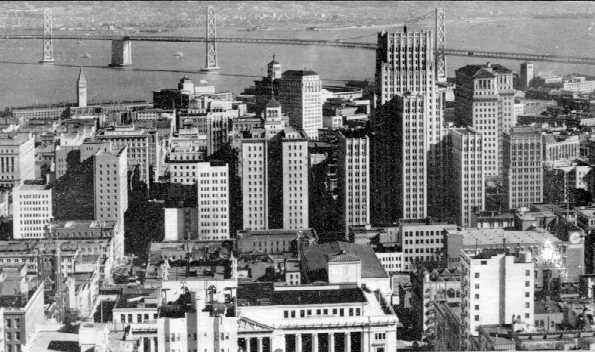 Isn’t this a great view of San Francisco? We’re at the lounge called the Top of the Mark. The Mark Hopkins Hotel is one of the city’s great hotels.

The Russ Building, by the bridge tower, is the biggest office building on the Pacific Coast. It’s 31 stories high.

Near the Ferry Building is the Produce District made up of small beautiful, old brick buildings. You can go there early in the morning and watch the grocers come in to pick out all kinds of vegetables. 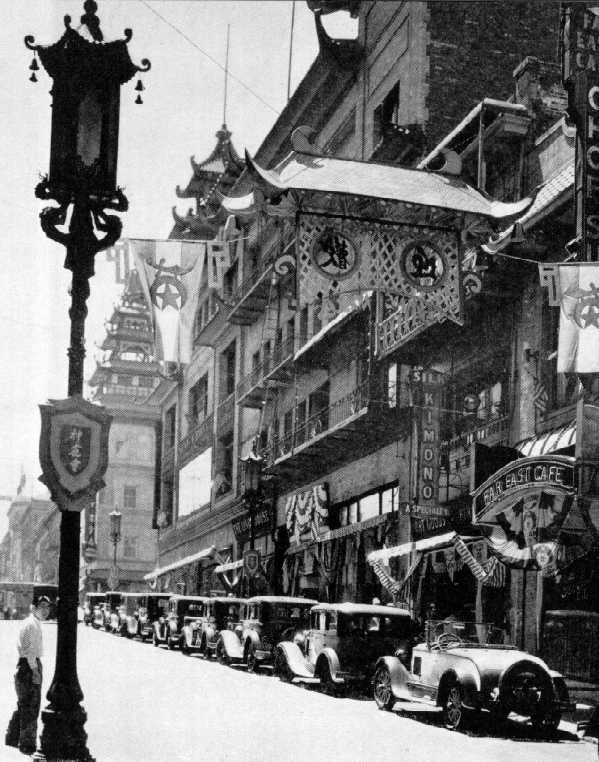 After leaving the Mark we walked down California to Grant Avenue. Here is San Francisco’s world famous Chinatown. There are wonderful shops and the best Chinese food anywhere… and so reasonable. You can get a large bowl of pork noodles for 35 cents.

Do you see the Shriner’s Flags at the top of the picture? They are having a convention in San Francisco. There is a Shriner’s Hospitals for Crippled Children on Nineteenth Avenue. It provides treatment for many children ever year without charge. 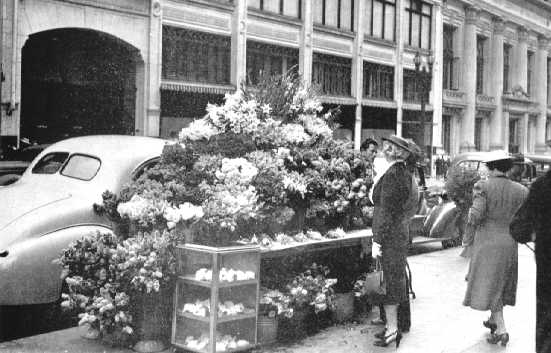 After leaving Chinatown we walked down to Powell Street. Around Geary Street there are wonderful flower stands.

San Francisco is sure a different place. 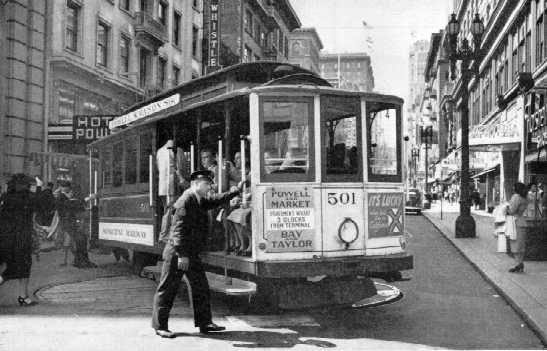 We’re at Powell and Market where the cable cars get turned around to go to Fisherman’s Wharf. There is a great cafeteria just a few feet from the turntable. It’s called Clinton’s and I hear the food is great… but we plan to have dinner at Fisherman’s Wharf and that’s where we are heading. 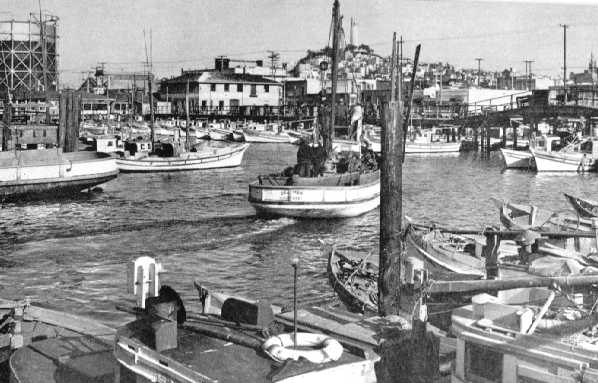 We walked along the docks to look at hundreds of fishing boats. The one coming in here is a crab-fisher. They are all painted wonderful colors and the fishermen are all Italian. They are very friendly, and we watched them sitting on the docks mending their nets and singing. 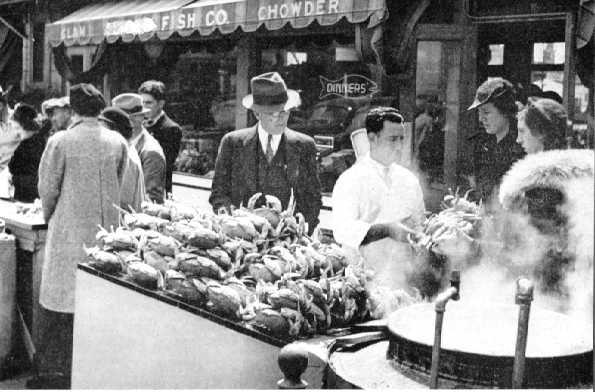 Fisherman’s Wharf has to be one of my favorite places in San Francisco. The men who do the fishing bring them back to the restaurants and outdoor stalls. People can pick out a crab and it’s cooked right there for you to take home.

One night we went to a great restaurant a man told me about. It’s called San Remo’s, near Fisherman’s Wharf. You can get a wonderful Italian dinner for $1.00 from soup to dessert. Another dollar gets a bottle of house wine. You go into the bar to pick it up.

Our waiter was very friendly. I think he had been sampling the house wine.

Playland at the Beach 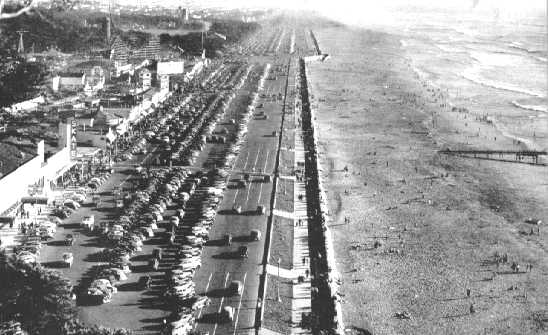 San Franciscans love the beach. The water is too cold to swim in but Playland at the Beach has everything else; a wonderful roller coaster, the Fun House, Shoot the Chutes, and great food. A favorite is Topsy’s Roost for delicious fried chicken and dancing. If you’re eating on the balcony you go down to the dance floor on a slide!

My favorite was the Pie Shop… the best chicken and beef turnovers imaginable… fantastic crust and wonderful gravy. San Franciscans take them home for dinner. 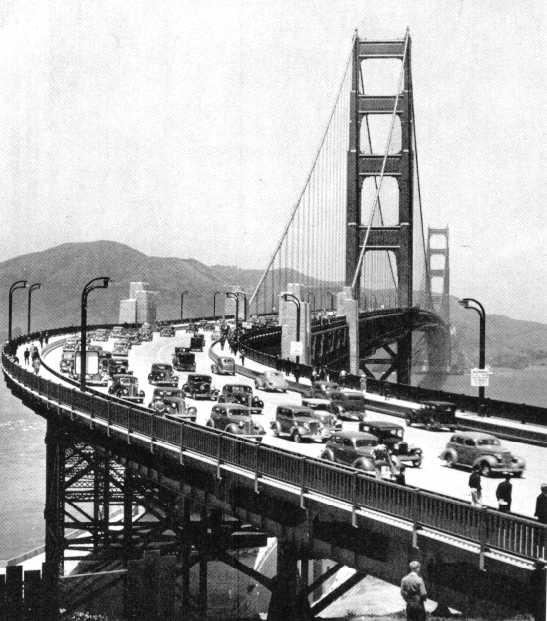 We left Playland and drove through the Presidio to the Golden Gate Bridge. The Presidio is still an important Army Base and has been on active duty since Spain built a fort there in 1776.

The Golden Gate is my favorite bridge. We parked the car near the Toll Plaza and walked across the bridge for 25 cents. You can’t walk on the Bay Bridge.

Our trip to San Francisco is over too soon. I hate to say goodbye to this beautiful city. The people who live here are sure lucky.

Hope you enjoyed my letter and the photographs.

Say hello to everybody.