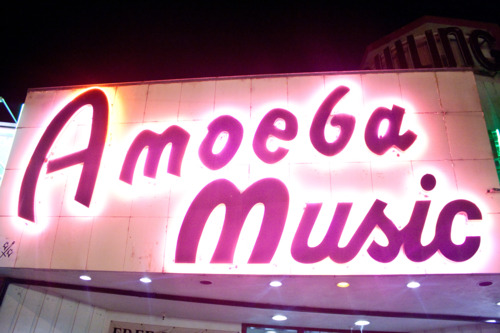 Last Thursday night, the streets of the Haight Ashbury District were filled with anticipation and excitement as devoted fans and music lovers awaited the arrival of the newest cool-kid on the block, Lana Del Rey. The New York native was there to sing some of her popular songs from her new album, Born to Die, at Amoeba Records. Del Rey has gained a cult following – and it seemed like they all turned up for the show. Let’s just say crowded would be considered an understatement. Since we were all in a record store, fans and supporters were in between aisles of CDs and other products sold at Amoeba Records, all hoping to get a glimpse of the sultry songstress.

The show started at 6:00 PM, but savvy concert-goers arrived two hours early to reserve a decent spot in the store. It filled in quickly as the hour drew closer for Lana to take the stage. Wearing a white baby doll dress and hair in light curls, Lana Del Rey won the audience with her humble attitude and emotional singing. She made it clear to the adoring fans that she was grateful for their support and only sings for her fans. Accompanied by her pianist and guitarist, Lana sang her album hits like Born To Die, Without You, Million Dollar Man and Video Games. Fans mouthed the words, swaying in motion to the music and soaking up every minute of the experience.

Contrary to her lackluster appearance on Saturday Night Live a couple of weeks ago, Lana Del Rey gave a remarkable performance with confidence and great stage presence. This might mean that the indie pop singer is more comfortable singing in smaller groups. Nonetheless, it was a great comeback and solidified her presence in the music world. 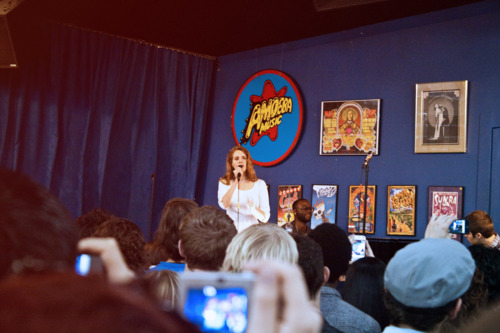