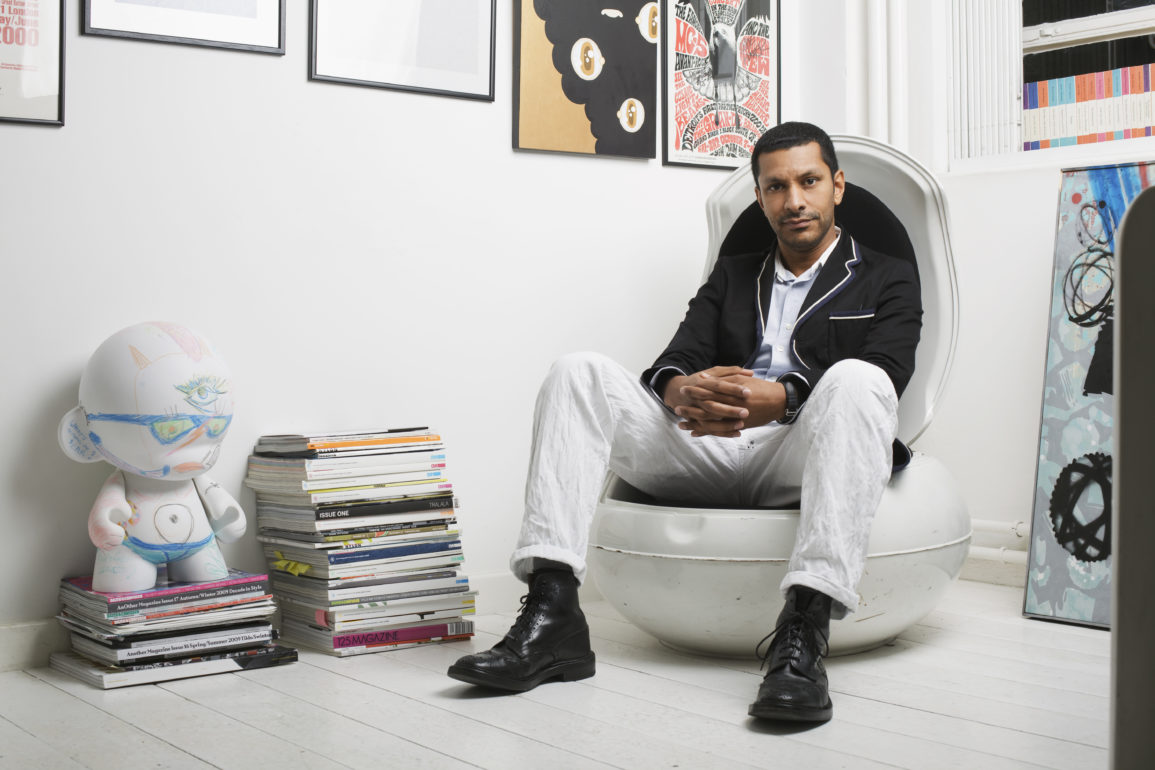 Keanan Duffty talks to Raoul Shah, a visionary strategic thinker with over 20 years of experience in marketing and communications for many global fashion and fashion related brands. In 1993 he launched Exposure, a communications agency built on the power of network, great ideas and word-of-mouth. Today, the agency employs more than 200 individuals in London, New York, San Francisco and Tokyo. Clients include Levi’s, Nike, Dr. Martens, Coca-Cola, Vitamin Water, Netflix, De Beers, Samsung, Incase, Casio G Shock, Fred Perry, Hunter, Globe-Trotter and John Smedley. He is a trustee of the British Council and an avid collector of Do Not Disturb signs. He also knows a few people.

Keanan Duffty:  How did you start Exposure and who or what influenced you to do that?

Raoul Shah: I started with a simple and naïve belief that putting my friends together and networking was a career in itself. Of course, I never fully realized that when your friends are artists, DJs, musicians, designers, retailers, bar owners and journalists, the cross-pollination of ideas and diverse cultures creayes an interesting environment for things to happen. I never got paid (I ran clubs like the Subterranea to earn cash), but met a ton of great people and eventually was asked by Converse to do PR and product placement for them. Basically, hook them up with my network! The rest, as they say, is history…

My influence was probably the working environment that Nitin had created at Pepe Jeans (my first job). Lots of young energetic people who were keen to learn, work hard, and enjoy it along the way. And, most importantly, I was influenced by a work culture where you were encouraged to take responsibility, try things and not fear making mistakes. I hope I have some of that running through Exposure.

KD: What is the one piece of advice you would give to students in order to promote their work in today’s market?

RS: Whilst the world is getting faster, don’t over-look the value of making time. Making time to meet people, asking the right questions, being curious, visiting places, and absorbing what’s going on around you. Find a way to communicate and showcase your work in both physical and visual channels. The screen you’re looking at is never more interesting than the smell of fresh cut grass and getting caught in the rain! Package your work into a great story that others may then want to tell and share. Keep the windows open to receive ideas and input from others. Learn to listen, more than just hearing. Never give up if you really believe in something.

KD:  Do you think that rapid information exchange via the Internet means that print is a dying form in the media?

RS: Print will never die, it will just continue to be relevant in different ways. Magazines, books and newspapers will always exist, but they may have a different role. Magazines will become more specialist and niche, newspapers may be more like free-sheets with hourly versions on line, and we all still love the experience of holding and reading a great book. The quicker information is exchanged in the digital world, the more we will seek things that help us slow down, appreciate the moment, and cherish quality content (of our own choosing) to provide focus and knowledge. There are some things from the past worth protecting and celebrating. Print is one those trades that has re-emerged, like vinyl, and locally sourced products. It’s already apparent amongst brands like Field Notes, Nigel Cabourn and Tellason, moving back to authenticity, craft and artisan values. Too much information doesn’t make us smarter – it becomes noise. But a good read of National Geographic definitely adds to your dinner party conversation!

KD: What was the most influential magazine for you when you were growing up?

RS: Smash Hits. The lyrics were such a great idea, and who’s going to ignore Blondie on the front cover? I still remember virtually every single word from the records of that era. It was music and style that made me feel grown up and part of a great British music scene. The Face was next for me (thank you, again Nick Logan) – I was luckily able to buy this bible of youth culture from the very first edition (Jerry Dammers on the front cover, I think). I’m a slightly obsessive collector of The Clash memorabilia, and I still have various copies and lyric pages that featured the band somewhere in a box.

KD:  Give us a really off the wall anecdote/story. Something that not many people will know about… it could be about anything related to your work.

RS: When we pitched for the Levi’s Europe account in 1998, we were tiny. About 10 to12 people in total. So I flew the whole company to Brussels for the pitch, including our brilliant receptionist Cindy, and we set up in a huge unused warehouse. We invited the client to come and hear our pitch over there, and first thing they saw were fish-tanks full of all the media in which Levi’s had appeared that month. All rubbish and destroying a great brand! And then they walked into a room with one single row of global style magazines (Dutch, Purple, Self Service, Tank, Flaunt, Nylon, Composite, Citizen K, etc.) within which we said we’d secure visibility for Levi’s if they gave us the account. They told us we had won it before we even started the actual presentation.