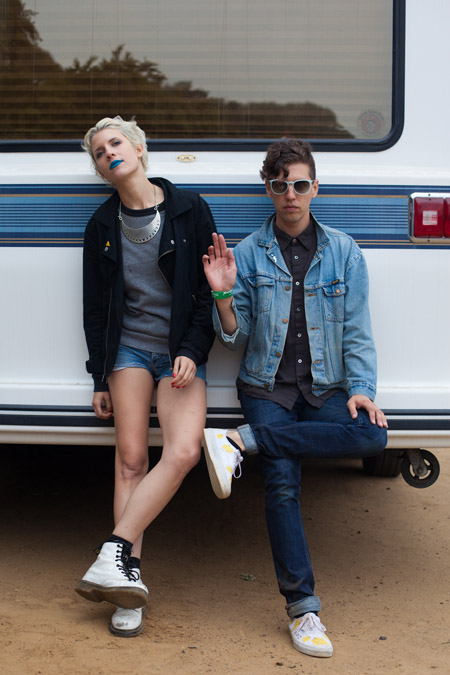 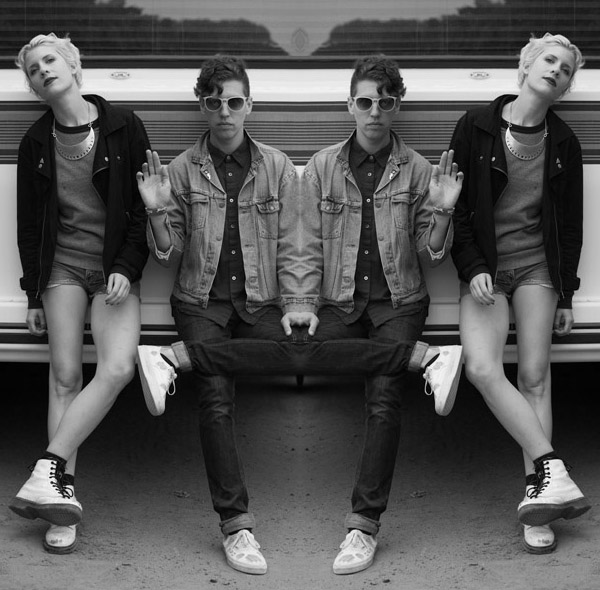 Claire Evans and Jona Bechtolt of YACHT at Outside Lands earlier this year. Photo by Anna-Alexia Basile.

Today’s edition of A Little Music for Your Friday packs an extra punch. Not only are we featuring one of our favorite bands, YACHT, we also got a chance to interview one half of the duo!

Their signature sound – space age disco paired with ideological lyrics and mantras on repeat – has had us hooked for years, and we even included them in our runway soundtrack at the Academy of Art University Fall ’12 Fashion Show. With their latest single, “Le Goudron”, released earlier this year, Jona Bechtolt and Claire Evans have managed to steal our hearts (and minds) yet again. The track is actually a cover of a surrealist French song from the 1960s, originally recorded by Brigitte Fontaine, but in YACHT’s hands it sounds more like something from the future. Pay particular to attention to the last line, which is repeated endlessly – “Le temps est un bâteau, la terre est un gâteau.” It translates to “Time is a boat, Earth is a cake” – so very YACHT.

Follow the jump for our interview with Claire from YACHT and the video for La Goudron!

You’ve described YACHT as not only a band and business, but also a belief system – what are the core values, ideas or mantras?
We have a little book, The Secret Teachings of the Mystery Lights, that presents an in-depth overview of the YACHT philosophy, but at its core it’s a philosophy of self-empowerment and equal access. The way we see it, all major human belief systems–art, spirituality, science–boil down to the same simple questions. Who are we? Where do we come from? What is the nature of reality? Artists are just as interested in a question like, “how can something come from nothing?” as religious people are. We may choose different approaches, different metaphysical categories, but the pursuit is the same–and no one group has it all figured out.

Once you realize that, you can try to understand other people’s perspectives as an intellectual exercise, which helps you get out of your own head. It also means that each individual is allowed to write their own reality, their own holy books, their own ideas. There’s no limit to what you can do.

The triangle seems to be a significant symbol for YACHT, can you explain the meaning behind it?
We chose the triangle as a logo because it has worn many, many hats throughout human history. Essentially every religion has a trinity, or triad, somewhere: from the holy trinity of the Western Christian canon to the sri yantra in Hinduism. It has esoteric meaning, in Freemasonry and pagan ritual, as well as mathematical significance. It’s vital to the construction of many important architectural structures (pyramids, geodesic domes); the “delta” in mathematics is a triangle that represents change. It is a gay rights symbol, and one imbued with pythagorean mysticism. In short, it has so many meanings that it is universal; no one group can claim it. In line with our “everyone is looking for answers” philosophy, we find that interesting.

You’ve talk about having a certain spirit behind everything you do, as opposed to a genre or a specific sound – how would you describe that spirit?
Punk rock, at its essence.

2011’s Shangri-La explores the idea of Utopia – what are your thoughts on the concept? Has YACHT found or created a Utopia?
In our estimation, Utopia is not a physical space, but a temporal one. Sticking yourself in one place, with the idea that it will be Utopian, or forever yours, or permanent, is dangerous: the beauty of life is change and coming into contact with other people. No sense building walls around your Eden. Instead, try to string one joyful moment after another, moving from place to place and letting go when things stagnate. Like J.D. Salinger said, “all we do our whole lives is go from one little piece of Holy Ground to the next.”

We’ve loved your albums, but your live performances take the experience to a whole other level. What do you hope people come away with after a show? What do you love most about performing?
We hope people are energized, and that they feel empowered. Our live shows are about contact and communication. If we can make people feel like not only were they there, but they participated in making the moment memorable, then we’re happy, because that feeling carries outwards into people’s lives.

Even your clothes seem to be part of the performance – exploring ideas of light & dark, black & white – is there a specific message you’re expressing through your sartorial choices?
As a collaborative duo, we’ve always been fascinated by duality, by the classical binaries: male/female, black/white, good/evil. They don’t express the totality of experience, of course, but there’s something really enduring about these pairs, something that transcends culture and our specific moment in time. We wear black and white to imply that between the two of us is a broad spectrum of grey space.

Are there any other artists (musicians, illustrators, designers, photographers, etc) whose work you love?
Of course. We have more non-musical influences than musical ones: the installation artist Yayoi Kusama, many science fiction writers–namely William Gibson, J.G. Ballard, Philip K. Dick, Octavia Butler–weird philosophers like Hakim Bey and Robert Anton Wilson, designers like Paul Rand, Ettore Sottsass, the Eames. We are rabid consumers of art, and try to turn our brains into pop-cultural sieves through which endless re-imaginations of our predecessors can percolate.

Technology has obviously had a major influence on you (even being part of the name*), but you also stress the importance of human connection. What are your thoughts on the ever-increasing role of technology in our lives?
We grew up online. It would be impossible for us to be YACHT without the technology that has articulated and galvanized our career. We have always used the web as a medium for direct discussion with our friends and fans: for us, it’s about accessibility, about contact. We have many close friendships that originated from an interest in our fans, and we also have been able to travel the world playing music because the walls of distribution have been torn down.

Of course, it’s a double-edged sword: there is a culture of superficiality, of artificially-generated insight, of visual fetishism, that moves more rapidly than any artist can work. But we trust in people’s capacities to explore and have meaningful experiences on the web.

YACHT celebrates it’s 10th anniversary this year, any favorite moments from the last decade?
The entire decade has been a blessing: we do what we love.

What adventure will YACHT embark on next?
Our newest project is that we’re working on a television show for Amazon. It’s a meta-detangling of the last ten years of our life on the road, a comedy about an opening band called Support. We have no idea, quite, where this will lead, but we think it’s important to perpetually challenge ourselves with new problems.

Thanks Claire for an awesome interview!

*YACHT stands for Young Americans Challenging High Technology, an education program Jona was enrolled in as a teen.