The World According to Harry: Happy Belated Birthday Anna! 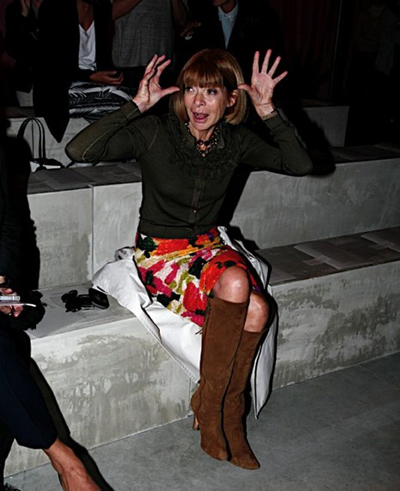 She once said at the Teen Vogue annual Fashion University: “I worked for American Harper’s Bazaar — they fired me. I recommend that you all get fired, it’s a great learning experience.” I honestly cannot tell if Anna Wintour was being funny, sarcastic or if she was telling the truth? Or was it a “ha-ha, I got the last laugh” to Harper’s Bazaar?

“Jeans and T shirts can be equally fashionable as an Oscar de la Renta ball gown,” said Anna when asked about what is fashionable on a Barbara Walters special. I actually used this quote for my text messages ringtone alert before it annoyed me. Anna proved that she stands by her aesthetic from the first day she started at Vogue until today. She put Michaela Bercu in a $50 pair of jeans and a $10,000 T shirt by Christian Lacroix on the November 1988 Vogue cover. The cover was quite a new thing in 1988 because it was of an unknown model and it was shot outdoors in a mix of affordable and high fashion clothes.

With a reported salary of $2 million a year, I cannot think of what to give Wintour for her 61st birthday. After thinking a lot about it, I think I know the perfect gift for Anna Wintour: retirement. While I do not see her ever retiring, she deserves a nice retirement. However, with Sally Singer moving to T Magazine, there isn’t anyone that could replace Wintour.

Maybe the movie is true. Maybe she is going to remove everyone that will damage her position. (Watch out, Tim Gunn!)

Happy Birthday, Anna! We love you!