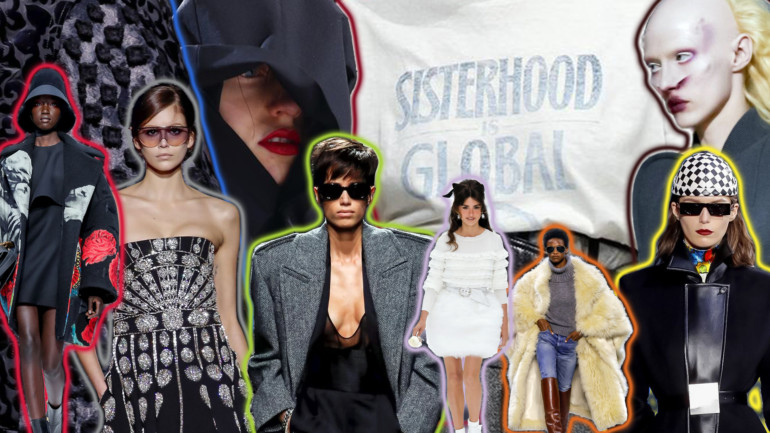 After Paris Fashion Week has ended, we’re left with the inspiring collections and the sophisticated messages the designers sent down the runways. Who stood out and tantalized our senses? Here’s our Top 10 of the season:

Maria Grazia Chiuri is known for her rebellious and feminist collections. This time, English teddy girls, Yves Saint Laurent’s 1960s revolutionary designs for Dior, and Robin Morgan, the American feminist activist, was on Chiuri’s rebellious mood board. At the backyard of the Musee Rodin, the Dior show opened with an Italian poem by Tomaso Binga, an Italian artist who chose a masculine pseudonym to parody the social privileges reserved for men. Binga’s ‘living writing’ alphabet (1976) decorated the walls of the show while the voices of Amy Winehouse, Chrissie Hynde and Colourbox created a girl-power soundtrack. Highlights included T-shirts with Morgan’s words, bucket hats, high-waisted checked trousers, prom-style circle skirts, leopard print and vinyl paired with lace veils, and saddlebags, of course! In this show, Chiuri managed to marry Dior’s elaborated clothes with British street style of the 1960s, while giving a nod to the popular exhibition “Christian Dior: Designers of Dreams” (on display at the Victoria & Albert Museum in London until 14th of July 2019).

The timeless Yves Saint Laurent muses Betty Catroux and Catherine Deneuve were the inspiration for Anthony Vaccarello’s new collection. He made many references to clothes both muses wore in the past, especially to Deneuve’s Saint Laurent trench in La Chamade (1968). Bold shoulders, mesh tops, vinyl blazers, leather short-shorts, and ruffled party dresses bore in mind the exaggerated and flamboyant dress code of the 1980s. Also, eighteen menswear looks were presented within the womenswear collection. But, all those 1980s vibes could be wasted if it wasn’t for the fluorescent and black lighting, which reminded us how powerful and full of color were the 80s.

The whole collection channeled glam rock, as Rick Owens paid homage to the legendary but also forgotten designer, Larry Legaspi, who created many signature designs for Grace Jones, Kiss, and Labelle and also served as inspiration for Owens’ whole career. Another American designer, Charles James, also influenced the FW19 collection. To amplify the bold looks, Salvia, the performance and make-up artist, distorted the models’ faces by adding prosthetics such as cheek implants and alien-like contact lenses. Silver fur and leather jackets, heavy platform boots, and huge, brightly colored shield glasses were the landmarks of the collection.

Black, black, and more black. Yohji Yamamoto is the last living legend of sartorialism, and this season the 75-year-old Japanese designer was, once again, in his comfort zone. The collection was inspired by an era before ‘fashion’ got its modern name, a time when garments were only created for practical reasons. In such clothing, you could see the raw edges, the imperfect draping and seams, the string details, the childlike painting. The last looks were referring to the 17th-century Peruvian tradition, called Tapada Limenia, of women covering themselves and leaving just one eye showing, as a way of anonymously flirting. Being the master of wabi-sabi, Yamamoto proved once more that being ‘imperfect, impermanent, and incomplete’ can be very liberating.

This season, Celine looked more ladylike. Hedi Slimane left the 1980s party girls behind, and proposed a more bourgeois, archive-inspired look. Pleated skirts, leather culottes, and stonewashed jeans all paired with thigh-high platform boots. There was also sense of a much more sophisticated, middle-class, Parisian style, embodied in long, printed dresses with matching leather belts, Victorian collared shirts paired with knitted sweaters and tweed blazers, all worn with aviator sunglasses. One thing is for sure, the new Celine once again reminded us a lot of the old Celine.

“Many small shadows come together to make one powerful thing.” This was the explanation given by Rei Kawakubo to accompany her “Gathering of Shadows” collection. Searching for beauty in the dark, the deconstructed clothes looked like huge black bird cages that reflected a unique quality of light, depending on the material. Leather, vinyl, velvet paired with mesh tops and hoods lended a punk-goth element to the collection.

To create the collection, Pierpaolo Piccioli drew inspiration from The Movement for the Emancipation of Poetry, an anonymous Florentine gang who plasters their city’s public areas with pages of poetry. Piccioli wrapped the models with soft fabrics decorated with Jun Takahashi’s neoclassical-inspired lovers’ design and a few lines of poetry. The bucket hat was paired with most of the collection’s looks. In this poetic and romantic collection, Piccioli successfully combined the dreamy essence of eveningwear and the reality of daywear.

‘The Winter of Eden’ was the name of Clare Waight Keller’s collection for Givenchy. Keller had Eden on her mind as she wanted to emphasize the duality “of all round and sharp structure as the silhouette marries tailoring and flou.” (flou is the French word for a fluid, draped fabric). The structure of the tailoring was plenty masculine, with sharp shoulders and blazers, while long plisse floral dresses added an extra movement to the body. Snakeskin was almost everywhere in the collection, since the Garden of Eden’s central player was the cunning serpent. Leather trenches, bags, and high heels with 40s style platforms bore a hint of original sin.

Gods and legends live on mountain tops, and so does Karl Lagerfeld,  from now on. It probably wasn’t a coincidence that the legendary designer chose classic Swiss chalets covered in fake snow as a backdrop for his final show at Grand Palais.

Lagerfeld was always curious about what the future holds; who doesn’t remember the launch of the Chanel spaceship at the FW17 Ready-to-wear show? The show began with a minute of silence in tribute to The Kaiser of Fashion. This was an opportunity to reflect on Lagerfeld’s legacy: In 1983, he took the reins of Chanel at a time when everybody considered the French fashion house old and almost dead. In 2019, Chanel is one of the most powerful, influential names in the world.

Penelope Cruz walked the runway like a true snow queen, in a snowball-shaped white skirt, holding a white rose as a farewell to the late designer. While David Bowie’s “Heroes” echoed, Cara Delevingne led the emotional finale to the sound of applause, and everyone shed a tear.

The Louvre’s Cour Carre turned into Nicolas Ghesquiere’s playground for the Louis Vuitton’s show. To create a discussion about our sense of place and our ‘tribes’, the designer brought Centre Pompidou’s bright colored pipes and poles into the historic museum, naming the show “The beauty of controversy.” The clothes themselves had a 1980s electro, Parisian, New Romantic aesthetic. Leather mixed with Liberty-esque florals and denim, biker jackets, asymmetrical shawls worn with A-line skirts, and most of them paired with a small leather swimming cap-like helmets. Great contradictions so beautifully displayed, reminiscent of the people who rendezvoused at Cafe Beaubourg and Cafe Costes back in the 1980s.