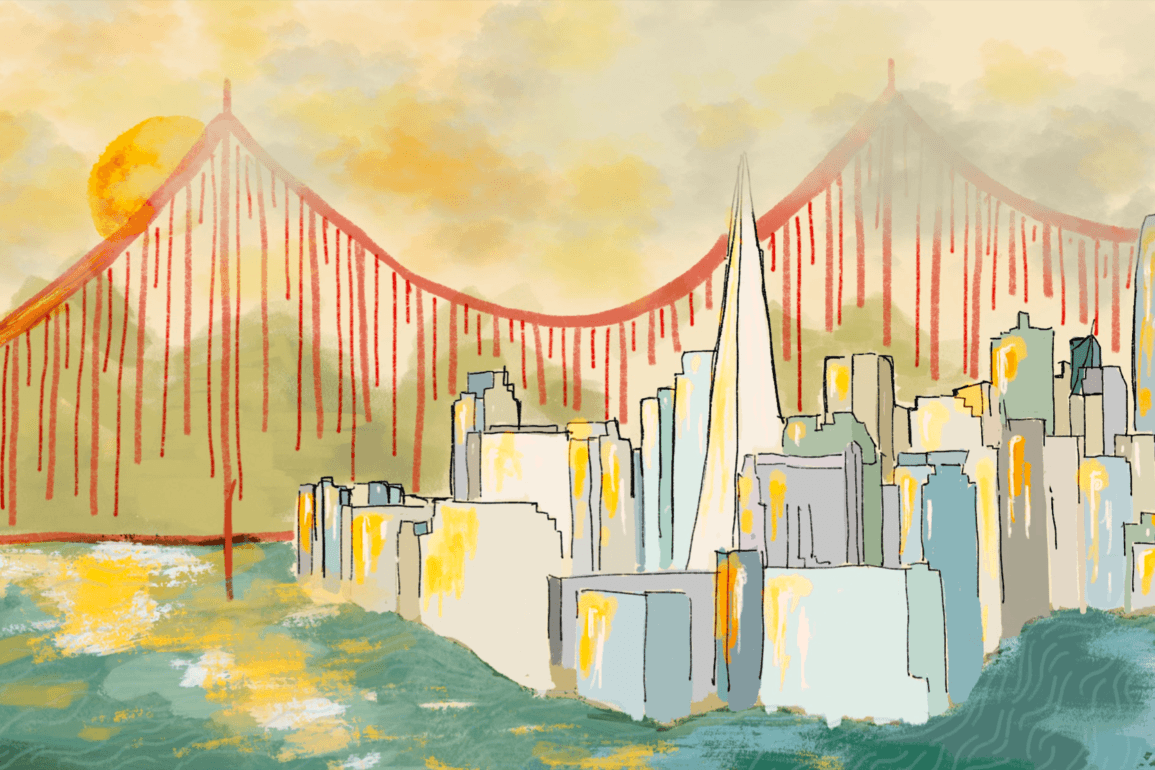 This January, SFMTA and San Francisco Beautiful – a non-profit organization that advocates for civic beauty, neighborhood character, and accessible public art for all in San Francisco – launched the 2022 Muni Art Project.

The project originally began in 2015, intending to spread art and exclusively feature San Francisco artists and poets selected by the Poetry Society of America to bring art and poetry to Muni commuters. Throughout the years, five poets were chosen, but this year is the first time only one local poet was chosen: Lawrence Ferlinghetti, who passed away in February last year.

With this year’s theme of “Streets of San Francisco,” the School of Fashion has the pleasure to share the work of two of its students selected to participate in this project, Krithika Sengottaiyan and Sebastian Raphael, both designers within the BFA and MFA Textile programs, respectively.

The opportunity came after Rhona Mckenzie, Assistant Director of Textiles, encouraged students to submit their work for the competition. The artists would develop their submission piece based on a poem and, if chosen, they would be given the opportunity to create seven more. “San Francisco is home,” recalls Sengottaiyan, originally from Madras, India. “The city is a big part of me, and I wanted to give back, even not sure if I would be selected.” Like Sengottaiyan, Raphael mentions he was planning to create art for the city to show his love and respect for it before the competition. Both designers submitted the first piece last year with a unique recreation of Ferlinghetti’s poem “The Changing Light.”

Sengottaiyan’s pieces are a mix of different elements put together. She explains that she wanted to show her favorite elements to create a unique composition, “none of my pieces is a straight scene.” Her first piece submitted, for example, could clearly be a view from any car driving on the Bay Bridge in the direction of the city. However, we see the Golden Gate Bridge and the lighting of a perfect Californian sunset. “The way the sun reflects and plays with the city architecture is gorgeous, and I wanted to show that,” explains Sengottaiyan.

Raphael also delivered a version of the Golden Gate bridge, however, depicting it in a more clean and graphic process, “I wanted to create something simple but in the same way, new.” He explains he wanted to deliver something that people who may not have an art background would still appreciate. He concludes, “Easy to absorb but unique.”

The designers each created seven more pieces. Five of them from pre-selected poems, including “The Changing Light,” “Recipe for Happiness in Khabarovsk or Anyplace,” “Populist Manifesto,” “At the Golden Gate,” and “What is Poetry?” The last three of them with the theme “Interpretations of the Streets of San Francisco.” For the final three submissions, Sengottaiyan developed beautiful, unique portraits of the city’s buildings: a book store, as she mentioned being a huge fan, San Francisco’s iconic structures, like the Palace of Fine Arts and the entrance of Chinatown, and lastly a scene of the Botanical Garden with a distinct but memorable touch of rain.

For his three final pieces, Raphael developed art that reminds us of fabric patterns. A scene of the Palace of Fine Arts but with polka dots, the Pier 39 sign with seals all around; however, they have custom prints, a particular collage. Lastly, what could be a P&B scene highlights the Bay Bridge with graphic art. Raphael mentions the idea of including his background and fascination with textiles into his pieces to bring awareness of the fashion world through his art.

While it is for sure notable the difference between the artists’ thinking process, techniques, and design, the feeling that art is medicine is mutual. “Art fills my heart. It became kind of… my meditation,” confesses Sengottaiyan. Raphael adds, “People should have more access and have more opportunities to be creative. Color… art is a therapy!”

The 2022 Muni Art Project, featuring the work of these artists plus Richard Louis Perri, Steffan Sanguinetti, and Tan Sirinumas are available on the Muni ride through April or at the San Francisco Beautiful Website.