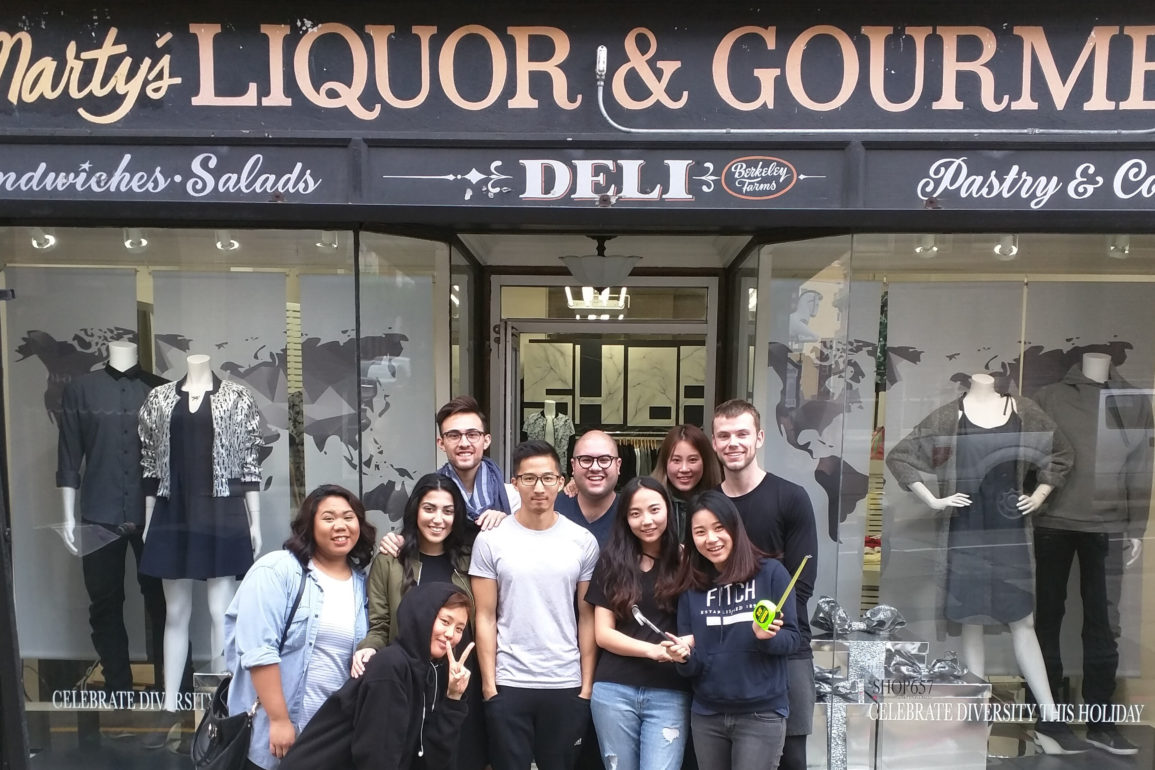 SHOP657’s New Windows on the World – and Downtown San Francisco

Visual Merchandising students at the Academy of Art University School of Fashion are kicking off the holiday season in style – with new window displays especially designed for SHOP657, a fashion and retail space at 657 Sutter Street that sells unique work by Academy students and alumni.

The innovative and artistic windows installed this week came about as the result of a collaborative project from students in FSH 307 Concepts for Window Display under the guidance of Visual Merchandising Instructor Steven Petersen.

The objective of the class was to “design, produce and install ‘brand right’ windows at SHOP657,’’ said Petersen, who emphasized the importance of the proposed windows’ theme: “to communicate and celebrate the creativity and diversity of both Academy and San Francisco.’’

The process required a number of key steps. Visual Merchandising students during the class prepared a survey for SHOP657 store manager and Academy alumnus Danny Dinh to complete, which included questions about the store’s target market, customer demographic, and, overall, image. Another element requested was information about the products that would be featured on the selling floor in November and December. After all, a cover must sell its book.

Each student presented individual window concepts that were subsequently narrowed down to two common themes: “Winter Wonderland’’ and “Artist Holiday.’’

The class was then divided into two teams to design the best windows based on the themes that had been agreed on.

The reviews were set up in a classroom that had been rearranged to have a screen and presentation area at the front, a long table at the center for the Executive Committee and two long tables in back for team members – emulating a professional environment.

Two representatives from each team presented the concepts to the Executives, who asked questions, conferred and offered feedback, culminating in a directive to merge the two concepts.

Celebrate diversity this holiday season with all new @shop657sutter window display developed and executed by Visual Merchandising students as part of the FSH 307 Visual Concepts & Window Display course under the direction of Steven Petersen, @pcs135. On video is BFA student Tuba Syed @manasyed unveiling parts of the new window display. See it for yourself at 657 Sutter. #academyufashion #shop657 #windowdisplay

“The teachable moment for me was HUGE,’’ Petersen said. “Each team had focused organically on one aspect of the business objective. One focused on all artistry and diversity and lost the holiday message and the other had focused all on holiday and lost the diversity message. That is a very easy thing to do when you are in the creative process.  That’s why it is so important to refer to your business objective several times during the creative process.’’

At the end of the meeting, the class came back as one unified team to create the final design. Three sub-teams were then formed to work on each of the stages: design, prototype and procurement. After the latter team explored different options to get the windows produced within their allotted amounts, Petersen put them in touch with Visual Citi, a visual merchandising vendor that brings concepts to reality on a budget.

“The intent was to teach the students about production options and vendor interactions but more came of it,’’ he said. “[Visual Citi] was generous, and offered to produce the graphics and boxes at an academic discount to fit into [students’] budget. They [also] sent a quote with the real price and the academic price so I could have that teachable moment.’’

Once the basic design elements were decided on, additional teams worked on graphic installation and mannequin styling.

In the end, all the elements came together. Creative collaboration, teamwork and partnership were all key elements to making this complex project a success. Research and preparation were also critical in delivering stunning results.

“Both the windows and what is being sold in the store are generally about holiday,’’ Petersen said. “We want the customer to understand this is a store to shop for your holiday needs.’’

“The mannequins in the store are styled with designer product sold in the store – they look as though they are ready for a holiday party,’’ he added.  “The graphics send a message that we are global and international. The boxes signify that we are a place where you can buy a gift. And the tag line, “Celebrate Diversity this holiday season, locked up with the SHOP657 logo, ties it all together.’’

Check out the “new’’ look at the store- another example of what your talented fellow students can accomplish with hard work and firm direction –  and enjoy the holidays!