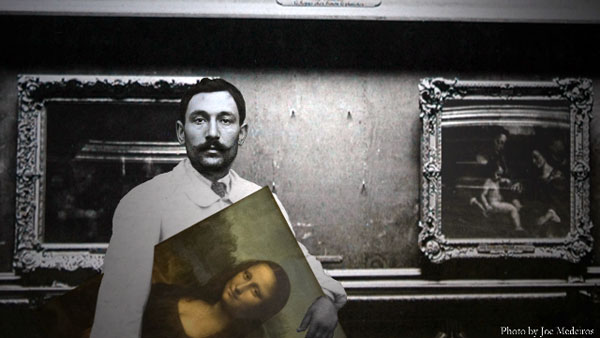 The Mona Lisa is certainly one of the most famous pieces of art in the world – pretty much ever – but what many don’t know is that at one point, it was thought to be lost forever. On August 21, 1911, the lovely lady was stolen from the Louvre with out a single clue as to who had abducted her. Days went by, weeks went by – and still nothing. Some thought it had been done as a joke and would be returned, others thought the museum had damaged it and were using the apparent theft as a cover up. And after months of searching, authorities still had no leads.

But then, two years later, an art dealer in Italy received a letter from a man claiming to have the missing painting in his possession. The dealer, Alfredo Geri, sent word to the head of the Uffizi museum in Florence, Commendatore Giovanni Poggi, and they decided to send back a letter saying they needed to see the painting before agreeing to a price. An Italian man showed up at his store and said he had the painting back at his hotel room, and that he would sell the painting with the stipulation that it not be returned to France – he had stolen it in order to restore to Italy what had been stolen by Napoleon, and wanted to ensure it would stay there.

Geri and Poggi went with the man, calling himself Leonardo Vincenzo, back to his hotel and watched as he unearthed the Mona Lisa from his trunk. Realizing it was the real deal, they took the painting and had Vincenzo, whose real name was Vincenzo Peruggia, arrested. But how did he steal it, and why? Was his real motive to return Leonardo daVinci’s masterpiece to its homeland? These are the questions explored in The Missing Piece.

The documentary’s director, Joe Medeiros, has been researching these questions for years. What he found was a daughter, mourning the loss of a father she barely knew, and a country carrying the shame of his crime. Through a combination of historical photographs, animation, and interviews with Peruggia’s descendants, Medeiros tells the story of the man who successfully stole the Mona Lisa. This riveting film will premiere at the the Mill Valley Film Festival, showing on Saturday, October 6th and Monday, October 8th, with Medeiros on hand to discuss his experience of making the film.

For more information and to purchase tickets, click here.