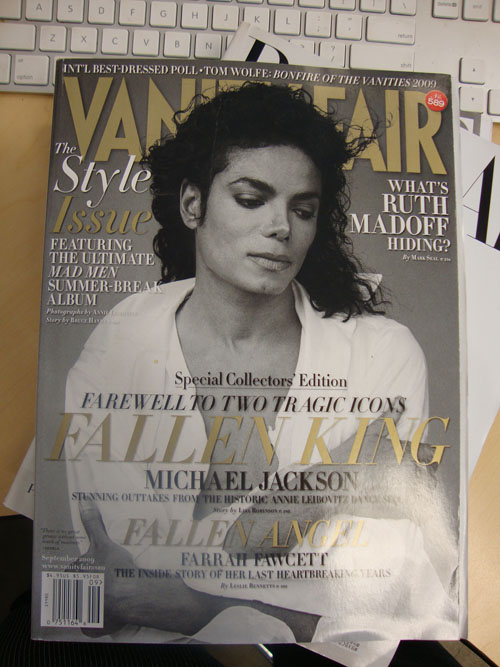 Cover: The magazine of high society, popular culture and style gives us a choice of cover for their September issue: Michael Jackson or Farrah Fawcett. We opted for the King of Pop. The magazine definitely gets some points for variety and a few more points for sentimental pop culture nostalgia. Grade: B+

Journalistic content: This is where the magazine shines. Of course there is a cover story of Michael Jackson – which is very thoughtful. In “The Boy Who Would Be King” (with photos by Annie Leibovitz), writer Lisa Robinson consolidates notes and interviews with Jackson to produce a great retrospective article of his life. The cover story on Fawcett is titled “Beautiful People, Ugly Choices” was written by Leslie Bennett and gives a look at her and Ryan O’ Neal’s life. Good content, not-so-good title. Other honorable mentions include “Out to Lunch;” an interview with Oscar de la Renta by John Heilpern and an interesting Q & A with Michael Kors. Then there’s the Best Dressed List – which is always a joy to read. Grade: A

Photo spreads: This is where the mag flounders. When the ads seem more intriguing than the spreads, that’s when there’s a problem – especially with the Annie Liebovitz shot “Don and Betty’s Paradise Lost.” Mad Men stars, Jon Hamm and January Jones look nice in the shoot styled by Michael Roberts, but there’s nothing captivating or interesting about it. It’s kind of flat and stoic. If that’s what they were going for, great – but it didn’t do justice to what could’ve been. Grade: C

Trend coverage: Clutches and shoes with fall accents like mock croc, feathers and metallic leather; a couple of beauty trends here and there. Nothing really to see here folks. Grade: C+

Rodarte sisters get literary: In a small section called “Night Table Reading” we learn that Laura and Kate Mulleavy of Rodarte recommend the books “In Youth is Pleasure” by Denton Welch and “Freedom is a Two-Edged Sword” by John Whiteside Parsons respectively. Call us bias, but as former guests of the School of Fashion this deserves extra points. Plus, it shows that designers read too!

For more of our “September issue grade book” click here