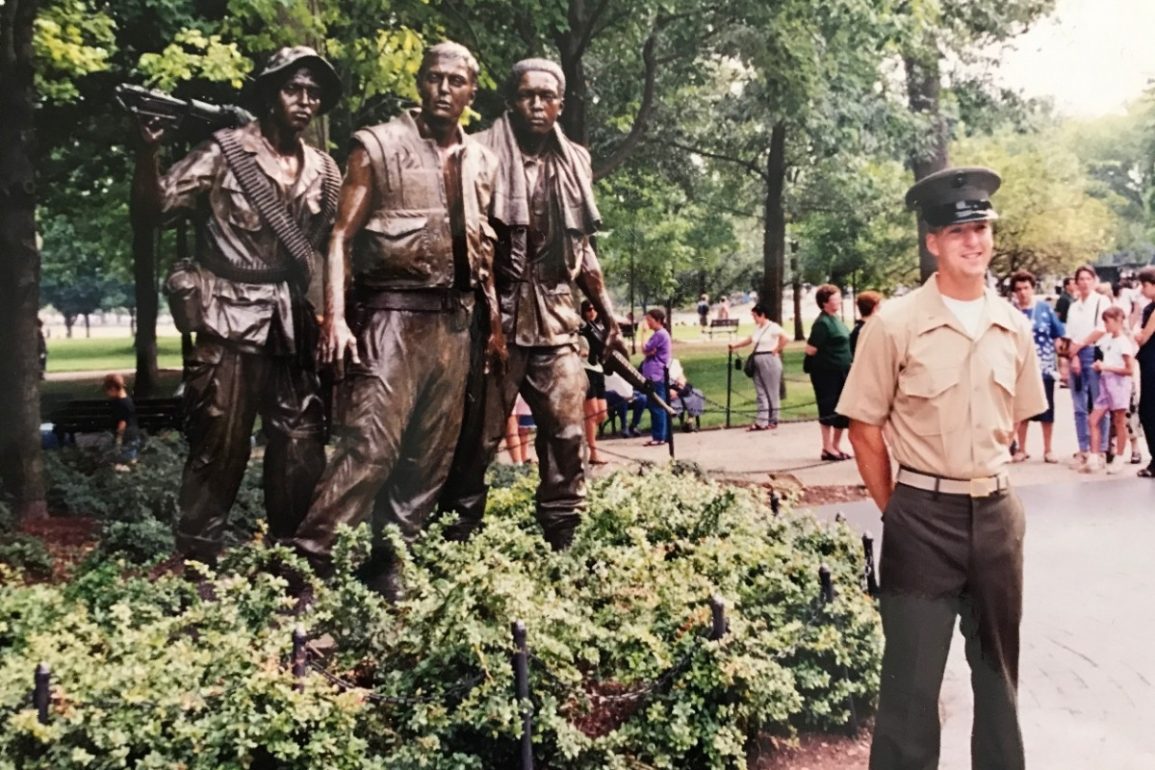 School of Fashion November 10, 2017
So far, Eden Slezin’s work has taken him to the Middle East and the Pacific Rim region as an aviation intelligence officer for the United States Marine Corps, in which he served from 1998 to 2004, and to the floor of the Grand Canyon as an adventure excursion guide for Backcountry Found, the company he founded in 2005. Most recently, the new M.F.A. fashion design graduate’s winding career path brought him to New York City, where he presented his thesis collection at the Academy’s runway show in September at NYFW: The Shows. Navigating between seemingly disparate points in a real-life game of connect the dots has taught Slezin irreplaceable lessons about possibility and self discovery.

Having grown up in the Bay Area in a working class family with military ties, he settled on a new plan: To join the Marine Corps. “It seemed like a way to see the world and learn something about myself, and a chance to do something I’d never get to do again,” Slezin said. His role involved extensive briefing on intelligence situations in the Pacific Command zone, including the potential effects of war in North Korea. Assignments also took him to Iraq, Bahrain and Kuwait.

Slezin values his years in the Corps not only for the unique experiences afforded him, but also for the lasting impact of his training. “They instill the characteristics that make a good leader: leading from the front, initiative, integrity, leading by example, hard work,”  Slezin said. “For most things in life, if you just apply that hard work and discipline to it, you can’t help but be successful.”

Armed with training and perspective, Slezin needed to identify a goal. “From the time I was an undergrad, it was just like this search,” he said. “I loved plant science. It took 20 years to come up with a new plan that gave me that much satisfaction.”

Backcountry Found provided an outlet for his active, adventurous side. A full-time job as senior general manager of a sports equipment retail store offered steady income, but little fulfillment. Inspired by beach fashion following a trip to Rio de Janeiro with a friend, Slezin and his traveling companion partnered to create Cute Tank, a line of men’s resort wear. That’s when Slezin realized what kind of work he would want to do, even if he wasn’t getting paid: He would want to design and work with clothes.

With tuition assistance from the GI Bill and the scheduling flexibility to retain his full-time job while attending school, Slezin enrolled at the Academy. “It’s been very fulfilling to let my creative impulses out and, at the same time, to learn a very technical and difficult skill,” he said. “At first I just wanted to make garments that people wore, but now I want to create pieces of art that are beautiful and special. It’s so cool to be a part of people’s personal identity.”

Slezin’s studies culminated in his thesis collection, When I Grow Up, which was shown at NYFW: The Shows. He drew on a range of inspirations to create a collection representative of all he is and all he loves. Designs reference classic vintage denim, nature’s tranquil beauty, and details borrowed from vintage and historic military uniforms.

Eden Slezin pictured at NYFW: The Shows prior to his collection making its debut on the runway. Photo by Danielle Rueda.

The presentation distilled 18 months of work into a two and a half minute show. Getting those 150 seconds exactly right requires intensive preparation. “Every day we were in the studio from 9 a.m. to 9 p.m.,” Slezin said of his week in New York. “I wanted it to be perfect, so I was willing to do whatever it took to have that experience to cherish forever. I poured everything into it, and what came out was exactly what I wanted.”

After graduating, presenting at fashion week and leading three Grand Canyon trips, Slezin is determining his next move. Whatever it is, new discoveries, growth and evolution are sure to ensue. Already, ideas about how to push both his career and the fashion industry forward through sustainable design are taking shape.

“Part of my task is to help educate people. If all my designs are sustainable, and people ask why, it helps start the conversation,” he said.