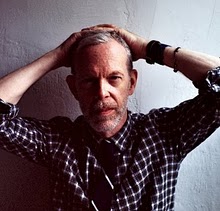 Online instructor Richard Haines has a popular blog called “What I Saw Today” . His career spans working as a designer for Calvin Klein, Bill Blass, Perry Ellis and Sean Combs to illustrating for InStyle magazine and J Crew.

You have been penned “The Drawtorialist” because of your work and following on “What I Saw Today.” Tell us about your blog and your fashion illustration work. When and why did you start blogging?
I started the blog about two and a half years ago. My career was in fashion design-menswear, and I was looking for freelance work. I figured if I started a blog, it would be another way to market myself. And I have always loved watching New Yorkers — it’s my favorite past time. So the furthest thing from my mind was the blog as an illustration vehicle but it took off immediately. The whole thing has been pretty amazing.

After working for so many large companies, and being so edited, it was an incredibly liberating experience to directly put my work out into the ‘universe’ – it was very empowering. I still feel the same way!

“A Visual Record of Cool Stuff Guys Wear…And Other Things That Inspire Me” is at the top of your blog. What inspires you these days?
I’m usually pretty consistent in what I find inspiring. It’s a guy who puts himself together in an interesting way. It’s not necessarily about fashion and clothing. I love watching guys with style – the way he wears a hat, the way he stands — it’s much more about attitude and swagger.

I’m inspired almost anyplace — on the train, at a party, a coffee shop — there’s usually at least one guy who’s put himself together well and I know will be fun to draw.

Is your style of illustrating similar to when you sketched designs while working for Bill Blass and Perry Ellis?
Yes and no. It’s developed over time, and working at fashion companies, a drawing is usually meant to convey specific information to a pattern maker, or done as a merchandising tool in the development of a collection. My sketching at those companies was fast and furious. There was no time to really sit down and do a sketch with color. Now I really sketch to convey more of an attitude, or a gesture. I have the ability to include a detail like a pocket or a pleat, but it doesn’t have to be so technically correct.

Where do you find and what catches your eye to draw your subjects?
I can spot someone interesting in any part of New York, but right now the interesting parts of the city are Bushwick (where I live), Williamsburg, the Greenpoint, and the lower east side. I moved to Brooklyn about two years ago, and the ideas and art are happening here, and for me this is where people are putting themselves together in really interesting ways.

What do you say when asking someone if you can draw him? Are most receptive?
New Yorkers love attention, and they love to feel special. I’ve had one person out of hundreds say that he wasn’t interested in being drawn. Everyone else is flattered by the idea and immediately strikes a pose – it’s pretty amazing. But I always ask if I can take a picture or sketch them on the spot. I have a whole routine where I quickly explain what I do and as I’m talking, I hand them a card with my name and a link to the blog – just so they know I’m not a stalker!

You had a busy New York Fashion Week in September, can you tell us some of the exciting things that went on?
In September, I really made an effort to go to as many shows as possible. I love everything about them, except trying to get in. The lines of people waiting to get in are just as interesting as the shows themselves, and the few times I got backstage to sketch models prepping was the best!

And things just keep unfolding. I had a SRO (standing room only) ticket to Narciso Rodriguez’s show, and saw a magazine editor friend who got me a seat in the third row. Then she took me backstage and introduced me to the guy doing the hair. He said he could get me into the Jeremy Scott show, so the next day I was sketching the models getting their hair and makeup done. As I was doing that, I ran into Kanye West, who had done a story about my blog the year before. We chatted and he invited me to a screening that night. So I went from standing room only to sketching Jay-Z and Beyonce in about 24 hours. That’s what I love about New York; you never know where something will take you.

For the February New York Fashion Week collections, you were sketching for The New York Times T Magazine’s online site! You must have had access to some great shows. Tell us about the excitement of this season!
It was a dream to have access to the shows via the New York Times and to be front and center at the men’s collections. One of my favorite shows was a new collection named ‘N Hoolywood.’ the designer showed in the Park Avenue armory — the setting was very old school and masculine 1890s. The collection itself was inspired by photos of men who mountain climbed in the 1900s — they looked like they stepped out of old photos from Mt. Everest trekking expeditions: thick beards, beautiful hand-knit sweaters, perfectly cut tweed jackets and pants. The execution of the clothes, the casting and the setting were all in perfect sync. It evoked a different era and was completely modern at the same time — wonderful!

Did you cover the European collections?
Not yet, but it’s always been a dream, and I’m working on getting there!

What is next for Richard Haines in 2011?
Lots! I just came back from LA where I have a show currently running, called “What I Saw Today.” The week before, I opened a show called “the boys of bushwick” at a gallery here in Brooklyn. I’m very proud of these and it’s exciting to have representation on both coasts! I’m also working on a series of illustrations for the San Francisco store Unionmade. Their taste and sensibility is just spot on! Another vision is to have a book published by 2012, so please be on the lookout next year!

I also signed with one of the top agencies, Jed Root, so I’m super excited about that. They are real pros and I’m excited about working with them on expanding my work and discovering new venues for it.

As in most industries, connections are important in the fashion industry. Can you give Fashion School Daily readers some advice on networking?
Well, without networking, a designer or artist or anyone else is basically isolated and in their own world. I had a really interesting conversation with an artist who had just graduated. She submitted her work for a show and got in. She was saying that she realized that as talented as she may be, nothing was going to happen until she made herself visible and put her work out for people to see. That’s the action that gets things moving in ones career.

So I would say 1) don’t be shy, 2) don’t be a perfectionist 3) get cards made with your name, email address, phone and link to your work 4) be professional and never burn bridges, the world is smaller than you think! And be open to striking up a conversation with almost anyone-you never know where it me go!

Make sure you check out Richard Haines’ website:  designerman-whatisawtoday.blogspot.com