Mark your calendars! We’re broadcasting the #CFDAAwards for the first time ever on Facebook Live! Tune in on Monday, June 5th – Red Carpet starts at 6pm EST, the show starts at 8:45pm EST✨

Are you ready for the Oscars of Fashion?! On Monday, June 5th (tomorrow), the Council of Fashion Designers of America (CFDA) presents the 2017 CFDA Fashion Awards in Partnership with Swarovski and for the first time ever everyone is invited! You can stream the event on Facebook Live hosted by stylist Brad Goreski from E! Fashion Police. The star-studded showcase itself will include presenters Nicole Kidman, Kerry Washington and Jon Bon Jovi, and be presided by comedian Seth Meyers at The Manhattan Center’s Hammerstein Ballroom.

“We have wanted to bring the CFDA Fashion Awards to a wider audience for some time and are excited to do this on Facebook Live this year,” said Steven Kolb, President and CEO of the CFDA on the official CFDA website. “The broadcast will allow viewers from around the world to experience the fashions on the red carpet and to learn the Award winners in real time.” 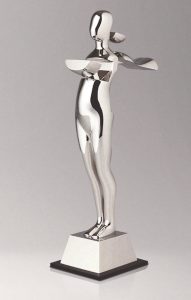 Aside from all the fashion, the evening is bound to deliver a few poignant moments. The Fashion Icon Award will go to the late Vogue Italia editor-in-chief, Franca Sozzani. It will be presented by her long-time friend and colleague Anna Wintour. CFDA Chairwoman Diane von Furstenberg will honor writer, lecturer, political activist, and feminist organizer, Gloria Steinem, alongside Cecile Richards who has served as the president of the Planned Parenthood Federation of America since 2006, and actress and singer, Janelle Monáe with this year’s Board of Director’s Special Tribute. Designer Rick Owens (we are still not over those human backpacks!) will receive the Geoffrey Beene Lifetime Achievement Award for his vanguard vision. For the complete list of 2017 nominees and honorees, visit CFDA.com

In 24 hours we’ll be on the red carpet at The Manhattan Center’s Hammerstein Ballroom for the #CFDAAwards! Tune into our Facebook Live broadcast and experience the night with us!

The who is who of the American fashion industry as well as A-list celebrities will shine the brightest on one of the most anticipated nights of the year. So, clear your schedule, get drinks and snacks and make sure your Wi-Fi signal is strong enough for all the glamour!

The Facebook Live broadcast will begin at 6:00 pm (EST) with the must-watch red-carpet segment and continue with the awards ceremony at 8:45 pm (EST). See if you can spot Academy alumni and envision your future self in the midst when the CFDA Scholarship Award Winners are announced.