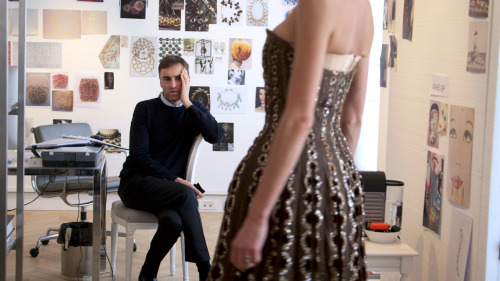 “I hope it’s gonna be good,” says Raf Simons as his first ever Haute Couture Fall-Winter 2012 collection is about to be presented. And it was good—exceptional, actually.

Rewind eight weeks: Simons, who comes from a ready-to-wear design background and has never created haute couture, has barely two months to create a haute couture collection. He can barely speak French and does not sketch. How is he going to translate his vision to the ateliers? Some of the staff have been at the house of Dior for over 40 years; They are the soul of the brand and they honor Dior, and now they all work for Simons.

Director Frédéric Tcheng’s film Dior and I is an emotionally honest and dynamic portrayal of the heart and soul of haute couture. The fashion documentary takes a look through the depths of the atelier of the legendary fashion house Christian Dior, focusing on the 2012 appointment of designer Raf Simons as the house’s creative director.

The film shows an authentic representation of the strong relationship that is built between Simons and the ateliers throughout the entire eight week journey  leading up to his premiere collection. It is a story of achievement, of creative process, of high pressure. Not the obvious choice for the creative director role, Simons has to prove himself under the legacy of Dior.

Simons came from designing menswear at Jil Sander, and therefore people have called him a minimalist, but Christian Dior is not that. Translating his experience to a brand that is synonymous with haute couture, Simons takes a minimalistic and radical approach to modernizing Dior, modernizing it by purposefully juxtaposing ‘then’ with ‘now’.

Dior, however, was not a radical designer; he said himself that he was reactive, not proactive. Whilst showing Simons’ journey, the film simultaneously narrates from Christian Dior’s memoir, which serves almost as a roadmap for the obstacles that Simons must overcome. It’s a ghost-like voice of approval, and uncanny how alike Dior and his eventual successor are in their methods.

The film is amusing at times, yet it feels extremely tense throughout. The fast-paced music at points evokes a nervousness for Simons. The editing alternates between quick cuts of close ups and long shots that create both an intimacy and an anxiousness. Is he going to get his collection done in time? We barely see the fabric and colors in his collection until the finale, instead it shows a lot of white; the white forms of the clothes on the mannequins, the atelier, the studio itself. This further heightens the intensity, which then explodes in blooms of color when the collection is revealed. A runway blanketed in flowers, walls of blue peonies, pink carnations, dahlias, all kinds of roses. This is not minimal in the slightest. And neither of course are the clothes.

The film defies any stigma about high fashion films being pretentious. Instead of focusing solely on the clothes, it shows the importance of creating a relationship with the people who are essentially the soul of the brand. Beyond the money and the collection itself, the film communicates Simons being welcomed into the family the ateliers there have created, and drives home that it really does take a family to put a collection together. As the film puts a large emphasis on Simons’ appointment as creative director, I would have liked to see more of his creative process and ideas conveyed with regard to the design of the clothing. Yet, at the same time it was refreshing that the film showed more of Simon’s emotional journey, his will to demonstrate his abilities, and his respect for the legacy of the atelier. His overwhelming emotion at the presentation of his collection was infectious. His personality shone through, and I felt nothing but sheer joy for the success of his stunning collection at the end. J’adored.

The Orchard presents DIOR AND I opening April 24, 2015 at Landmark’s Opera Plaza Cinemas in San Francisco, Landmark’s Shattuck Cinemas in Berkeley, and Camera 7 in San Jose.