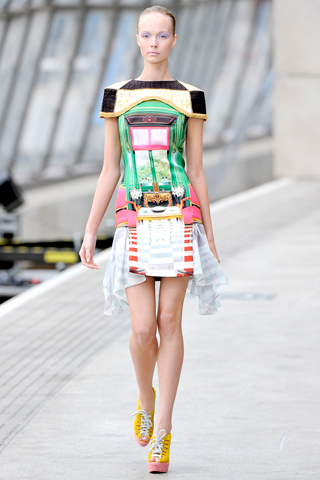 Harry: I must admit I haven’t been following this designer. Judging from her Spring 2011 collection, I could feel a little bit of Hussein Chalayan and Alexander McQueen here and there. But it’s perfectly fine because fashion always pulls inspiration from somewhere else. Mary Katrantzou was inspired by highly stylized photography from Helmut Newton and Guy Bourdin. I remember visiting the School of Interior Architecture & Design and seeing some projects hanging on the wall, giving you the illusion that you’re seeing into a window little houses. That’s the same feeling I got from the prints on the dresses: serene, whimsical and colorful.

Danielle: Have you ever thought about going out to dinner in Los Angeles with an image of the skyline printed on your mini dress? Then, you should take a look at Mary Katrantzou’s Spring 2011 collection. The designer juxtaposed hard, architecture-inspired lines with soft, flowing layers and mini-trains. I’m shameless when I state how unique and fantastic I think these textiles are. Images of window panes, elegant interior spaces, and flower bouquets seemed to be mixed up and re-assembled onto unique separates and dresses. I would love to wear one of the structured lamp shade – shaped skirts (complete with tassel lining). 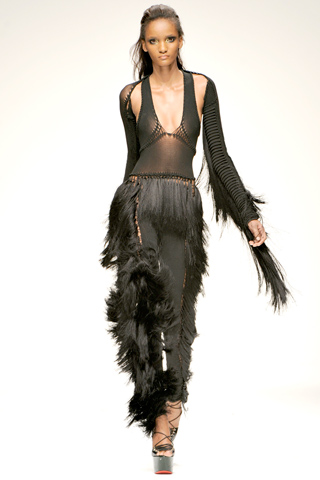 Harry: Mark Fast does body-conscious dresses. Last year he let a plus size model to open his show (who looked a bit uncomfortable in that revealing dress). Mark Fast’s Spring 2011 was a reminiscent of his Spring 2010, but executed more commercially. He also mixed his webby style with something more geometric and current. The fringe wasn’t a new thing for Mark, but it really helped the whole collection feel more current. The show was opened with black dresses, transitioned to some of the most beautiful spring colors, and closed with white dresses. I thought that was a pretty fun color journey.

Danielle: Mark Fast’s refreshing Spring collection has nothing but “spotlight stealer” written all over it. (Just imagine stopping traffic in one of these dresses!) Fast showed his classic knits in variation of mini to maxi, open stitched to sheer coverage, separates to one pieces, and black and white to vivid colors. He took body contouring to the next level, which I think his young customer base will adore. If nothing else, I definitely think we will see traces of his design details in fast fashion stores next spring. 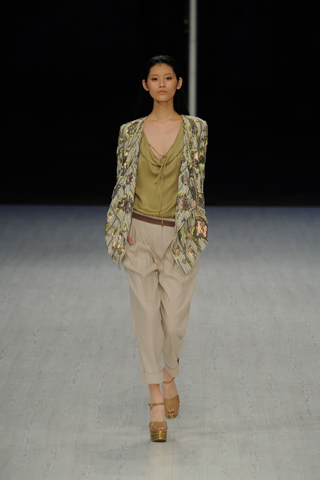 Harry: Matthew did something unexpected. In the past, he designed for “party girls.” This season he claimed to design for “a girl marooned on a deserted island.” There was indeed something very “nature” about the collection: the color palette, the use of materials and the fringe. Fringe are definitely something that’s been going on for Spring 2011 (see Mark Fast). The collection still stayed true to Matthew Williamson with appearance of some party dresses. The girl might have been marooned somewhere, but she could still party!

Danielle: I always count on Matthew Williamson to deliver a sea of popping, intriguing color combinations. For Spring 2011, he showed love to orange, cornflower blue, cobalt blue, and lime green. The textiles weren’t the most intriguing I’ve seen by him, but if one thing’s for sure, it’s that fringe dresses will be the thing to wear for Spring. (Caution: jewelry entanglement in your future.) 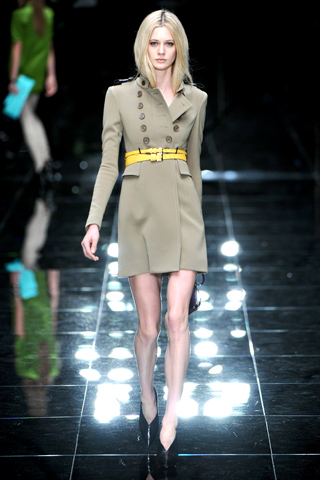 Harry: I was watching the livestream of Burberry Prorsum and noticed the finale was a big failure of monumental proportions. The girl fell ungracefully. – but she looked great in the studded jacket. The thing I like the most about Christopher Bailey is that he keeps on refreshing the brand, but still keeping the Burberry roots. He did “military” Burberry before, and now it’s “biker” Burberry. Well, it only makes sense since Thomas Burberry designed for England’s first motorbike riders in the early 1900s. I saw some very cute belts as well. The belts were almost the centerpiece of the outfit rather than just the supporters.

Danielle: Do I need to get my vision checked, or is it true that Burberry produced a spiked, black leather jacket?! This jacket has caught the attention of bloggers that would never wear a khaki trench (like myself). If Burberry was trying to make a smart business move with this “spike” plan, they’ve done it. I’ve always respected the brand, but I’ve never lusted over any of their pieces. It feels pretty good to finally lust, but I will admit that I’m not obsessed with anything else in this collection. Spiked khaki pant: Yes, please. Blue leopard print mini dress: No, thank you. 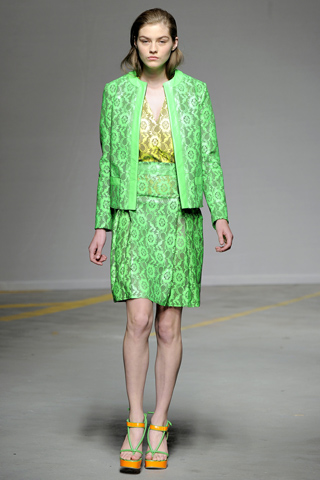 Harry: One thing that caught my attention immediately was the use of neon-colored laces in Christopher Kane Spring 2011. We were so used to seeing laces in either white or black only. Kane’s colored lace was actually perforated leather with vinyl coating, making it look like lace and leather tied up in one – and neon. There’s definitely some craftsmanship to notice. However, I’m not sure how I feel about piling argyle with lace/leather and the neon. There was something regal about it—almost too regal. The cut of the jackets was very First Lady. I could see Jackie Kennedy wearing it after she’s been ‘pimped’ or if she’s attempting to do neon.

Danielle: It seemed as though Christopher Kane’s show was split in two halves: the first filled with nearly Day-Glo, Easter egg colored ensembles, and the second half in lively textiles and embroidery. As much as I want to say no to lace in colors that represent Peeps candy, I can’t deny it. Kane’s collection is wildly positive and spontaneous. Although most of the pieces in his collection have a classic cut, I can’t help but think that Kane was eluding his neon infusion with the recent popularity with raving. Glowstick, anyone?