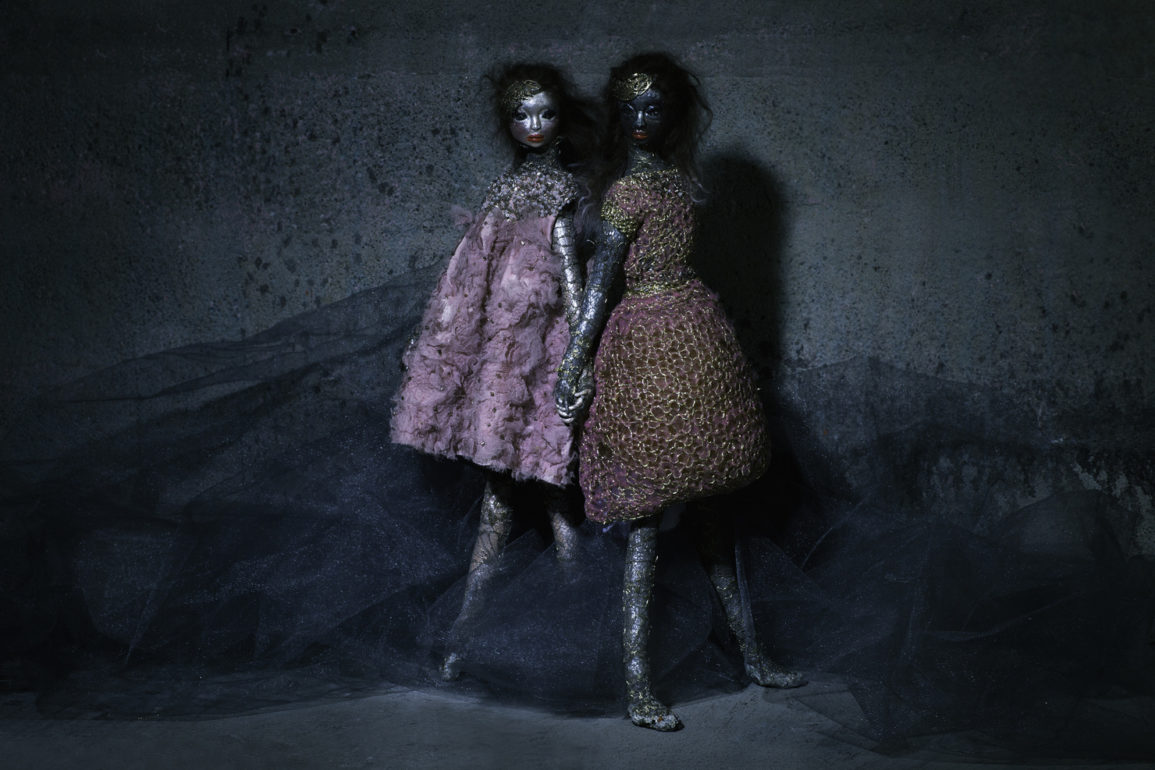 There can be no second chances in the industry that manufactures first impressions. Any fashion debut is fraught with epic expectations. The San Francisco Academy of Art University Graduation Fashion Show attracts as much critical and professional attention as any fashion week. To showcase in front of hundreds of who-is-who of the fashion elite is perhaps the tallest order on the beginners market. In 2012, one designer managed to impress the discerning audience. And she did it with no models in sight.

Maria A. Romero decided to forgo the traditional runway show in favor of a short stop animation film. For this unorthodox move, her collection was scaled back to a set of specially made dolls. “Dulces de Reliquias” is a poignant tribute to Maria’s Mexican childhood. It was inspired by the texture and colors of traditional candies popular during nativity celebrations at Christmas. The gold-painted dolls have clay heads with flowing hair from Peruvian lambs. Silk, chiffon, organza, taffeta, and tulle layer into dreamscapes of fragile innocence. The lasting impression is at once disarming and foreboding.

Following the presentation, Sarah Burton, one of the 2012 guests of honor at the ceremonies, offered Maria an internship with Alexander McQueen. The fashion film itself was featured on coveted Nowness.com and rated as one of the best fashion films of that year. Seems a sweet childhood prayer was answered.

Back in 2012, DEPESHA magazine caught up with Maria on the brink of her success, here is an excerpt from that interview:

How did you come to study fashion in the first place?

I was born in Santa Barbara, but I was raised in Miramar, Mexico. I grew up in that environment where all the women in my family have been seamstresses at one point in their lives. I loved watching them sew, crochet, knit and embroider. I returned to California as a teen and by the time I was a senior high school I knew I wanted to go into fashion design.

Why did you choose Academy of Arts University?

When I searched for fashion schools, the Academy’s motto “By Artists for Artists” really clicked with me. It made it stand out over the others. And I fell in love with San Francisco, its diversity and passion for the arts.

What was it like to collaborate across mediums with animation students at Academy?

I learned the impact of what a team of people can do! The most valuable and practical thing I learned was the importance of scheduling to make everything happen. Oh, and how to make dolls for stop motion animation! I think it’s really important to recognize the people that helped in this collaboration: Travis Weaver, Victoria Simiele, Mireya Francoso, Dorthy Thielsen, Federico La-Tona, Benjamin Arthur, and Luke Night! I couldn’t have done this film without them.

What question(s) do you ask yourself most often?

Whether I’m painting, designing or even changing my clothes I always ask myself, “Is this me?”