Do You Want Free Tickets to a Screening of Sex and the City 2? 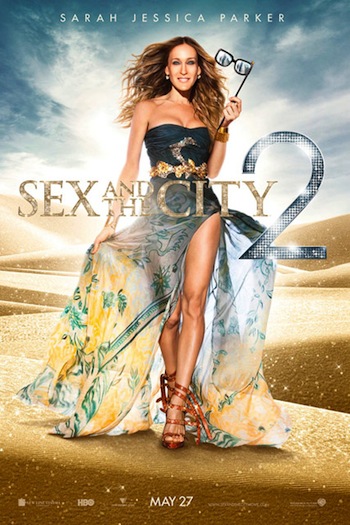 If you are dying to see Carrie (yet again) in this glamorous summer blockbuster, you can enter our Sex and the City 2 contest. Just answer the trivia questions (which are about the TV show, the first movie and the sequel) below and the person with the most points will win the following:

As an added bonus, your three friends will also get a T shirt and soundtrack. That’s a pretty sweet deal. To enter, email the your answers to the questions below to fashionschooldaily@gmail.com by Midnight, Saturday May 22. You must be a current Academy of Art University student and live in the San Francisco Bay Area to win. Please include your name, email, student ID and major in your entry. The winner will be contacted via email with details on how to claim their prize.

Here are the questions:

2.) In the first Sex and the City movie, what DVD does Louise (Jennifer Hudson) give Carrie as a gift? (10 points)

4.) What was the name of the restaurant where Samantha first met Smith? (10 points)

5.) In the episode titled “La Douleur Exquise!” Charlotte frequents a boutique where the creepy shoe salesman who has a foot fetish. What was the name of the salesman? (10 points)

6.) “The Russian” (a.k.a. Aleksandr Petrovsky a.k.a. Mikhail Baryshnikov) gives Carrie a dress in the episode titled “The Ick Factor.” Who made the dress? (10 points)

7.) What is the name of the bar that Steve and Aidan open in season 4 of the television series? (10 points)

8.) In the first movie, who made the wedding dress Carrie wears to her “first” wedding to Mr. Big? (10 points)

9.) In the series, Samantha longs for a famous handbag that is the ultimate status marker. What is the name of that bag? (10 points)
BONUS: What celebrity does she use to get the bag (only to achieve humiliating failure)? (5 points)

11.) Carrie is wearing a white dress on one of the film’s posters. Who makes the dress? (10 points)

Use the pictures below as inspiration to style a Sex and the City 2 look of your own. Take a picture of yourself in your SATC 2-inspired look and email it in along with your answers. (click the photos to enlarge).