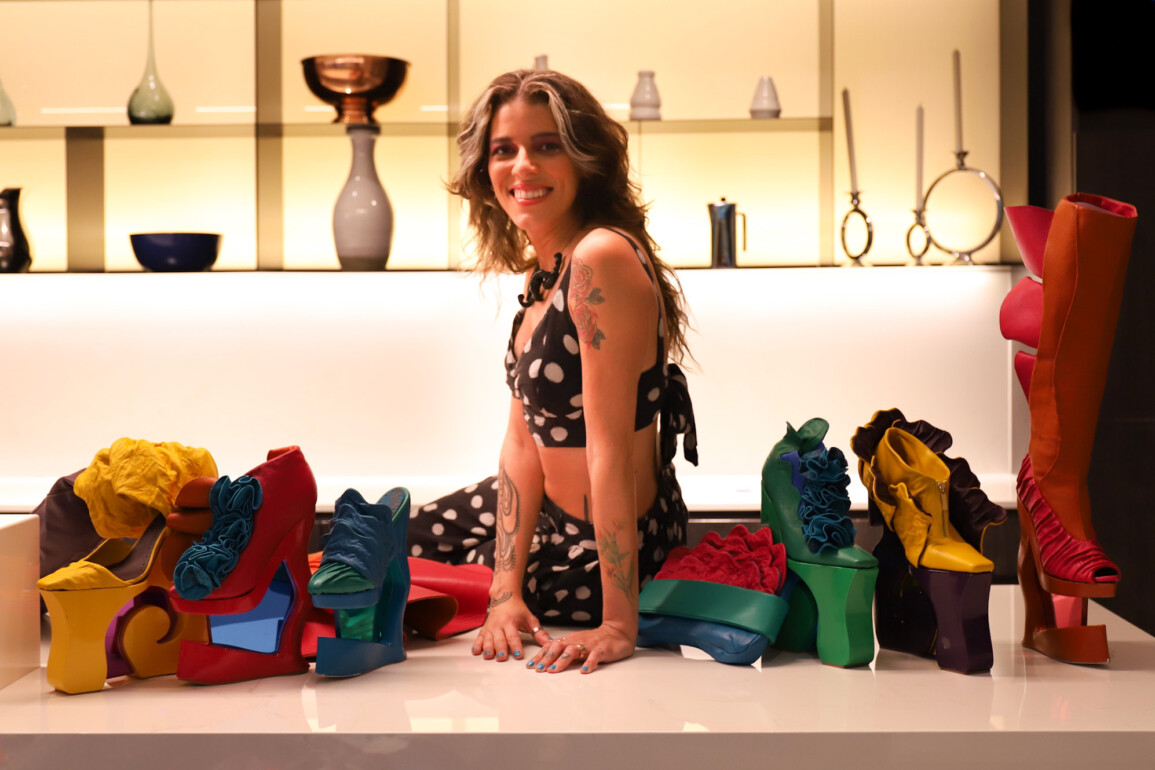 Bell Quintao graduated in May 2021 with the MFA Footwear and Accessory Design degree from the Academy of Art University, San Francisco, and is already making the school proud. In September, the designer’s collection “Ruffled Burgeon” got shortlisted for the ArtsThread Global Design Graduate Show 2021 in collaboration with Gucci, and in late October, it won a public vote award.

‘Ruffled Burgeon is a mind-bend collection focused on the intriguing and fascinating shapes, textures, and details of the fungi kingdom, especially mushrooms – with 3d printed heels and handles’, explained the designer. The bright colors used for the collection convey the essence of Brazilian culture, the designer’s origins. The three colorway of each product, combined with the ruffles and matte leather, reflects the vintage style. “Once Simon [Ungless, Executive Director of the School of Fashion] posted my knee-high boots on his Instagram with the hashtag #FutureVintage, the best description of my collection’s style!” shared Quintao.

The shoes and the bags are made using 3D printing both for the heels and bag handles. Mirrored acrylic soles contrast with the trapunto technique for the shoes’ upper part leather and detailing for both accessories. Trapunto quilting is also known as the ‘stuffed technique,’ carrying a puffy, decorative feature that involves a minimum of two layers to be quilted together.

The designer has applied the techniques of wrinkles and ruffles inspired by the mushrooms- the fantastic “fungi kingdom,” as she describes it. Quintao got inspired while camping with her family and friends at the national park Mt Madonna in California, where their hike ended up being a mushroom hunt that mesmerized her. After arriving home, she watched a few documentaries about the fungi kingdom and became obsessed with it! She even bought a book to learn more about it that created so many ideas in her mind, so she started sketching right away.

The resulting collection includes flamboyant burnt orange and magenta knee-high boots and shoulder bag, which share the color with pumps adorned with turquoise ruffles, repeated on the mescaline green Chelsea boots. The mules and clutch are turquoise and green, with details of pink wrinkles used on the clutch. Grape and melon yellow over-the-knee boots and booties feature the wrinkle techniques on the upper body and other detailing.

During her research, Quintao came across a story about Czech composer Vaclav Halek. Halek listened to mushrooms telling him melodies and composed astonishing theatrical symphonies based on more than 5,000 mushroom songs he captured. While designing her collection, Quintao listened to his music most of the time, which boosted her creativity.

The surreal designs with fine detailing make the collection ready to rock the show! The designer shared that she has “spent extreme hours in the creation of the 3d-printed heels and mirrored acrylic after experimenting with different techniques to get the leather shoe to life.” And it looks like sleepless nights have translated into an avant-garde reality. The collection will arouse the curiosity of artists, curators, and performers interested in bespoke sculptural accessories.