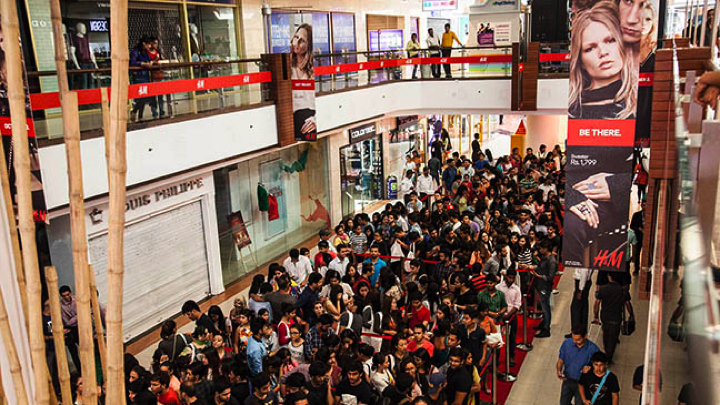 Will Fashion Sail South To India?

The forecast for global economy is as gloomy as San Francisco’s Richmond Neighborhood, which is quite murky. Earlier this June, World Bank cut its global economic growth projection down from 3% to 2.8% for 2015.

Developing countries, who are the engines of global economic growth, are facing difficulties; from Greek bailout that shrouds the Euro zone, to the China financial crisis that impacted all industries in the country, including fashion. Fashion brands that went east and took solace in China during the 2008 global economy meltdown, are now taking the blow as the country is struggling to maintain its economic growth. Brands from Burberry to Prada can’t escape this unfortunate fate. Despite the somber climate, one developing country continues to shine.

India, located in South Asia, just outgrew China, the number one luxury market, in terms of economic output. The World Bank also predicts the country’s economic growth will be at 7.5 % for 2015-2016 and continues to accelerate in the next few years.

Now that China is no longer the haven it used be, will fashion brands sail south and head over to India?

Fast-fashion companies such as Zara and H&M are racing to leave their footprints in India. This year, though coming late, H&M is opening its first store in the country’s capital, New Delhi. The Swedish fashion brand also plans to open 30 stores in total in India by early 2016. Unlike H&M, Zara, the Spanish company has already acquired total of 16 stores across India. Another fashion brand that has jumped on the bandwagon is San Francisco-based brand, GAP. GAP recently went on a closing spree in North America but is doing the complete opposite in India. The company just opened its first store this year in India and plans to open 10 new stores next year and total 40 stores in the next course of four years.

Unlike its fast-fashion counterpart, luxury brands such as Burberry, who has been known for its data driven and agile business model, has yet to make a move. Since its first store opening in 2013, the British luxury brand has only accumulated nine stores in total in the world’s second most populous country in the world. In China, Burberry has accumulated over 50 stores in various locations and just last year, the brand that is known for its check pattern just opened its largest store in Shanghai.

Similar to Burberry, Louis Vuitton has accumulated over 20 stores in China and yet only three so far in India. Despite the consistent growth of luxury product demand in India, it seems that luxury brands are still reluctant to enter the market.

Perhaps it’s the hefty import tax that Indian government imposes on luxury goods that hampers high-end luxury brands to invest more in the country. As much as 38% custom duty is charged on leather goods rendering a higher merchandise price in the country than overseas. And this causes many Indian customers to travel and shop abroad to place such as the EU to get a better deal.

Earlier this year, China’s Ministry of Finance cut the country’s import duty by half on average. The move was none other than to boost Chinese consumer domestic spending and keep them from spending their money abroad. Another country that followed suit was Indonesia. The archipelagic country, through its Finance Minister, slashed hefty luxury tax on branded items in hope to keep its citizen from spending their pocket money overseas.

Despite the tax reformations that occurred in several developing countries, India’s stance on its exorbitant import tax policy seems to be resolute. The country can’t escape from the fact that its millionaire population is growing at a staggering pace and they will want access to luxury products. Should the tax policy remain the same, the population will resort to overseas to shop. This will of course put a dent on India’s economic growth. Until then, luxury fashion brand might have to drop its anchor somewhere else first.