Why don’t you… watch the Alexander McQueen’s Spring 2005 runway show! 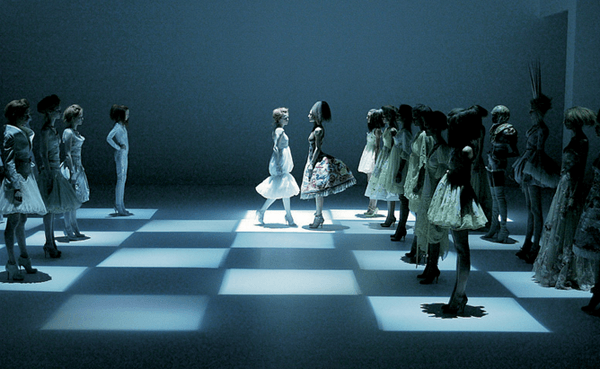 Fashion shows have not changed much over the years. Beautiful models walking down some sort of runway, generally to music, posing at one point or another. There have been slight variances here and there: at one time they held numbers, some featured narrators describing each garment, and in the ’90s models packed personality – striking wild poses, smiling and dancing on the runway. But they all adhered to the standard format more or less.

One designer who was always working to break the mold was Alexander McQueen. His fashion shows presented not just a collection, but a story. From merry-go-rounds and rings of fire to spray-painting robots, every show was a performance. Arguably one of his most iconic fashion shows was staged for the Spring 2005 season, for the collection titled It’s Only a Game. Models walked out on the stage and positioned themselves in several rows, and once the final model took her place, a chess board was projected onto the floor. The models were instructed to move about the board, playing out an entire game of chess, which ended in a checkmate between the two rival teams. McQueen was constantly looking for new ways to present his ideas and bring viewers into his world – this was one of his greatest triumphs.

Follow the jump to watch this amazing show, a true piece of fashion history.