Why Don’t You Get to Know Diana Vreeland? 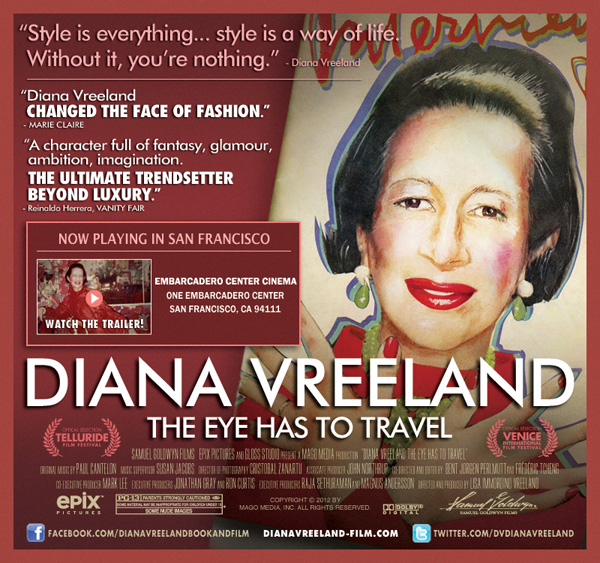 This week’s edition of Why Don’t You? is extra special, because it not only pays tribute to the legendary editor – it will help you get to know her too! The fashion documentary Diana Vreeland – The Eye Has to Travel chronicles Vreeland’s fifty year reign at the height of fashion, and it’s hitting San Francisco theatres this week. The style icon began her career at Harper’s Bazaar after being discovered in the lobby of the St. Regis hotel, and worked there for twenty-five years before becoming the editor-in-chief of Vogue in 1963. She launched numerous careers, including those of Lauren Bacall and Twiggy, and paved the way for countless styles that have stood the test of time – can you imagine fashion without blue jeans or the bikini?

Follow the jump to read more and watch the trailer!

The documentary, directed by Vreeland’s granddaughter-in-law Lisa Immordino, paints an intimate portrait of the editor with old photos, video clips, and interviews with those who knew her best. It is clear that Vreeland was one-of-a-kind, her razor-sharp editorial eye and extraordinary passion were unparalleled, and as one colleague states, “She simply didn’t think like other people.”

Diana Vreeland – The Eye Has to Travel is playing at the Landmark Theatre at Embarcardero Center. Click here for showtimes!