The World According to Harry: Fat in the Fashion Industry

Kim Noorda, a Dutch fashion model who looks like a sister of Natalia Vodianova, will be featured in the April 2010 issue of Vogue. She’s been keeping a journal about her eating disorder. At 5’10, Noorda, 23, weighed 110 pounds. At first she did not want to admit her eating disorder and claimed that she had learned to eat “a little less.” 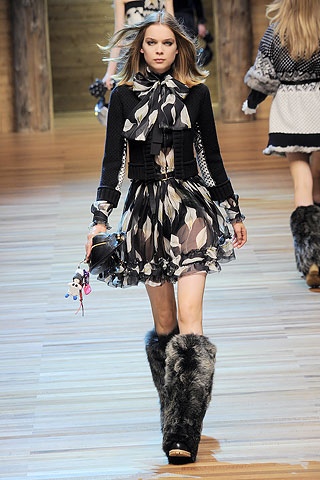 Her agent had asked her to gain a little weight—5 pounds to be exact. While gaining 5 pounds might sound very common to normal people, it’s not the same in the fashion industry. Kim even said, “People in the fashion industry see every gram of fat.” This statement is not exaggerated. Ali Michael, 19, was kicked out of the Paris Fashion Week after gaining five pounds – which is probably why Kim is a little freaked out.

Noorda started her journal in January 2009. She went to a doctor that confirmed her BMI too low and she needed to gain weight. Noorda then agreed to the request. She followed a weight-gaining plan for four weeks, which will result her in gaining a pound a week.

Noorda mentioned an interesting point in her journal:

Today a woman brought something up: “How do you interpret remarks from other people about your appearance?” For instance, you could misunderstand “My, you look healthy” as “You’re fat.” In me, it means the same, due to my job, I reckon. During a show season, when a model is not slim enough, people tell her, “Oh, you look so good, so healthy!” whereas the agencies recommend she lose weight. . . .

Translation: healthy in modeling means you are fat.

Since her therapy, Noorda gained 15 pounds to bring her to the current weight of 125 pounds. What I found extremely heartwarming was Noorda’s letter to Sally Singer. Singer advised Kim not to unpack the boxes of clothes that no longer fit her in her new home. Noorda wrote back saying “It helped when you said I should not feel bad about not fitting into those jeans anymore. In fact, the opposite was true: I should feel it was wrong to have fit such small clothes for so long.”