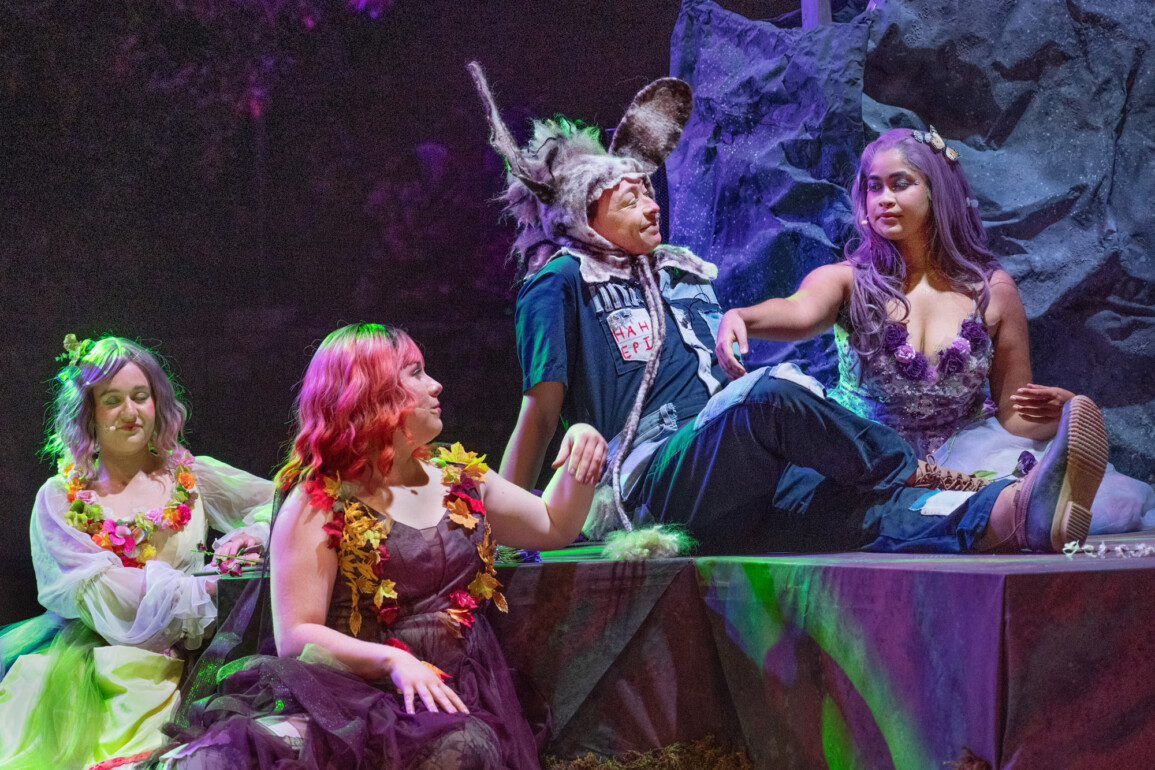 The Fairy Queen: Where a Midsummer Night’s Dream Takes the Opera

Ongoing yet another year, the Academy of Art University’s prestigious Costume Design Department has collaborated with the University of California Santa Cruz Music Department in costume creation for their upcoming annual opera production. The continuing partnership started in 2016 and has only grown in creativity. This year’s story, The Fairy Queen was created around love, referencing William Shakespeare’s A Midsummer Night’s Dream. The project’s leading designers, Sukanya Sarin and Yao Haoyu, both MFA Costume Design, have been working under the direction of Alina Bokovikova, Costume Design Coordinator at the Academy, and have shared some insight into the costume designs as well as their process/challenges in creating them.

While sticking to the nature of the story, they decided to split the characters within the four worlds: the fairy world, the human world, the gods, and the players. Costumes within the separate worlds are featuring various color palettes, silhouettes, textures, and designs. Collaborating with UCSC mostly through Zoom, emails, and a few onsite visits, our designers have created 20 costumes for the upcoming show.

In the midst of costume design and discussing back and forth with UCSC’s Music Department Director Sheila Willey to ensure everyone’s visions are being met, designers took into account from the beginning that this opera was going to be hosted outdoors, rather than your typical in-house theater. They understood the climate and comfort of the characters was important, however, they saw the outdoor scene as no challenge to their creative process. The two designers worked as a fantastic team, as their only main struggle came to dividing the groups and producing a clear direction for each world’s costume. Facing only minor speed bumps, it all came together with help from Bokovikova and costume coordinator Marisely Cortes to break down designs and include details from the Santa Cruz environment to the costumes.

A look into the four worlds.

The Fairy World is inspired by the surrounding nature, woods, flowers, and insects of Santa Cruz. As most people know, Santa Cruz is famous for its amazing redwoods and coastline. Our designers used multiple different fabric stacks to accentuate and recreate the forest texture to the designs. This color palette includes colors of four fairies representing the different seasons, containing greens, browns, burgundy, purples, and yellows. The fairy costumes used a lot of tulle, chiffon materials, and textures to enhance the separation of the fairy world from the others and create the flowy, puffy skirt and diverse silhouettes musical director Sheila had imagined. As for Titania’s silhouette, a look influenced by ancient Greek fashion, it was paired with a textured cape and feathered neck collar.

The Human World was inspired by the UCSC’s students themselves. To be more tailored and fitted, the looks are pertaining to red and gray tones for these costumes. Further expressing the tail of lovers, where four characters wander in the name of love through the woods to come across unexpected trouble. Yet the silhouettes among characters in the human world differentiate economic status and psychological portrait. For instance, Hermia, a brave, socially high character, will be portrayed in sophisticated attire while Helena, who’s more shy, will be dressed in a more conservative look.

The Gods’ World, which falls between the Fairies and the Humans, is taking a wild but pleasant twist to conjoin the two. One of the most interesting and intricate silhouette designs of the show, the God of marriage, Hymen’s costume was designed with a suit placed on top of a long wedding dress, highlighting the union of both bride and groom in marriage. Phoebus’ design contained a flowing skirt and an expandable cape, almost like wings, accessorized by a sun-like headpiece.

Lastly, the Player’s world was inspired by the American working class. The costumes were made up of denim materials, such as denim overalls, vests, pants, etc. The designs consisted of upcycled denim garments, where denim referred to the wearable workers costumes.

Alongside an entire collection of enchanting costumes to follow perfectly to this opera’s story, Sarin and Haoyu have plenty of accessories and decorations planned accordingly too. They both expressed how exciting and educational this collaboration was along with how fortunate they were to be given the opportunity. Haoyu stated, “Undoubtedly the most rewarding experience I have had is designing costumes for opera singers.” Costume Design coordinator, Bokovikova also expressed her joy and pride towards her students and acknowledged that this year’s lead design team was very fresh to the theater scene and had not had the prior year of assisting experience due to recent covid procedures. She describes them as hardworking, putting in extra hours to sew and produce these costumes. “We would lastly say that we did our best in creating the fun costumes for all the characters. Thank you for always cooperating with us throughout the project,” Sarin concludes.