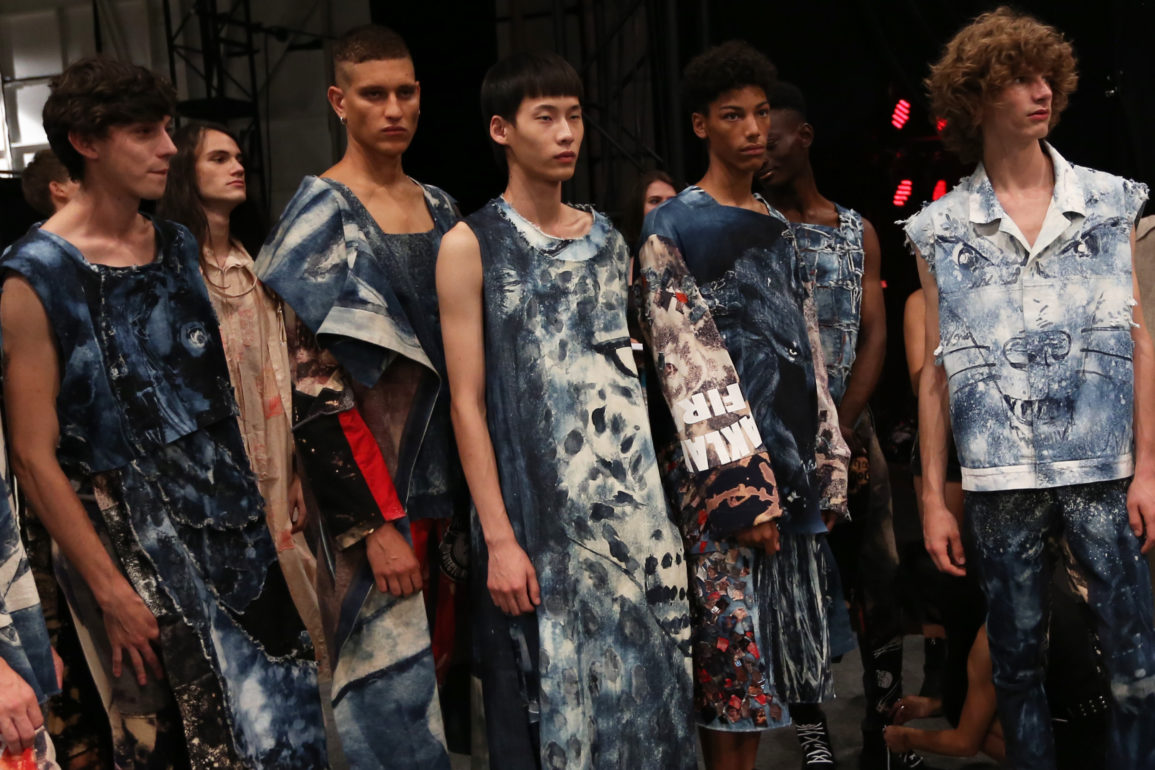 New York Fashion Week has a few traditions: from the gathering of leading press and celebrity guests, to incessantly hash-tagging runway photos on social media, to name a couple.  Since 2005, a new custom has emerged – a must-have invitation to Academy of Art University School of Fashion graduates’ collection show – which has steadily earned a reputation as point of reference for the future of fashion. This season was no exception: thirteen recent School of Fashion graduates débuted their creations on September 10th at the biggest catwalk at NYFW Spring/Summer 2017.

On the third day of fashion week, seven womenswear and three menswear collections were on display during School of Fashion’s 20th NYFW runway show held at The Arc/Skylight at Moynihan Station on West 33rd Street, a stone’s throw from the historic Garment District. The packed, expectant house included fashion industry insiders, representatives of the national and international press. Only the School of Fashion show could get Miss Universe and Miss USA into the same room at the same time.

“Since our first runway presentation at New York Fashion Week in September 2005, the show has grown in size and in the caliber of those in attendance such as retail executives, designers, recruiters, as well as the national and international media,” said Dr. Elisa Stephens, President of Academy of Art University. “We have always been committed to help launch the careers of our students, and are honored to have a platform of this magnitude to present their work.”

The event marked the culmination of hundreds of hours of preparation, from the first seeds of creative ideas to their successful realization on the runway.

After flying from San Francisco to New York, the designers put the finishing touches on their work at Kimball Studios in Union Square, with an occasional free moment to take in the surrounding panoply of Fashion Week and the City that never sleeps.

When the moment of truth finally came, the blacked-out space was dominated by a giant panel projection of bright lights which illuminated the runway floor, while the Academy’s backdrop logo glowed a fierce red behind it, and hypnotic lyrics with New Wave sounds filled the hall.

And so it began.

This international, multi-cultural crew of designers came from all over the world: Vietnam, Taiwan, South Korea and China were represented, but so were talents from Alaska, Indiana and Utah.

“Each of the designers holds a unique and thoughtful vision,” said Simon Ungless, Executive Director of the School of Fashion at Academy of Art University. “Their collections honor the essence of our industry and carry a conscientious connection to textile design, three-dimensional design, tailoring and construction techniques. It has been a pleasure for all of us in the School of Fashion to guide them while preserving their individuality and integrity.”

The whole was greater than the sum of its parts, as was apparent from the minute the show began, even if somewhat fashionably late. The spirit of collaboration pervaded the experience: School of Fashion produced not just designers, but a community driven by the desire to work together, collaborate, invent, and improve upon the status quo in fashion.

Those unable to be there in person tuned in via Livestream at http://www.academyart.edu/Runway to see these stories unfold.

Here is the order that they appeared on the runway:

Nina Nguyen Hui: MFA Womenswear Design, from Da Nang, Vietnam, was inspired by creatures of the sea and the organic nature of their patterns. “I just love the colors, the corals, the blue and the textures,” she said. “Coral can be fierce and unforgiving, but also exhibits a soft beauty. At times, it is both powerful and fragile.” Hui used tulles, yarns and embroidery, with Tambour beading techniques and laser-cutting for her whimsical, transparent designs.  While studying at Academy of Art University, she won a competition to intern at BCBG Max Azria, where she created samples using macramé and other craft techniques. Her looks were featured in the “Celebrating 30 Years of Hervé Léger” Collection at the 2015 Graduation Fashion Show.

Melissa Kheng: MFA Menswear Design, from Singapore. Her collection was Inspired by the unabashed masculinity of the Japanese Bosozuku motorcycle subculture and utilitarian elements of traditional fishermen. Both concepts share the common theme: being part of a group that gives life meaning through solidarity with others. Waxed cotton coats and jackets, oversized pocket pants, layered panels, and laser cut graphic pieces were combined with classic streetwear shapes. Her style motto: Knowing who you are, what you need to say – and not caring the slightest bit.

Natalya Sheveleva Robinson: BFA Knitwear Design, from Izhevsk, Russia. Her subconscious use of eerie, sinister, Malachi green colors were inspired by Arnold Schoenberg’s musical theory, The Emancipation of Dissonance, and Art Deco architecture. Robinson contrasted warm and cold colors and the sharp geometric linear with fluid draping. She released herself from logical constraints to free herself to experiment.  “You have to let go and [allow} the moment of surprise and magic to happen.”

Lindsey Trueman: MFA Womenswear Design, from Alberta, Canada. Her collection was inspired by her Native American heritage and the story of her great-great grandmother. Tailored suits with cleanly tailored silhouettes were created using repurposed antique grain sacks bearing original embroidered initials and burn-out brocade. Some of the inspiration for the collection also came from the late British artist/fashion designer Christopher Nemeth.

Ben Ellis: BFA Menswear Design, from Anchorage, Alaska. After an electic childhood growing up around the Bush Pilots, he started drawing his own superheroes at age three. After seeing the dramatic deterioration of his native Alaskan habitat, being sustainable and ethical is critically important. “All my tee shirts and jerseys have been donated,’’ he said. His collection uses repurposed denim and jersey and was inspired by the work of the French artists Andre Derain and Henri Matisse and the Russian painter Wassily Kandinsky. Ellis was awarded the 2016 California Fashion Foundation Award during his last semester at the School of Fashion.

Anita Szu-Yi Chen: MFA Knitwear Design. Born and raised in Kaohsiung, Taiwan. Anita uses cashmere, virgin, and Merino wools in unexpected ways. Her collection explores the difference between “appearance and expectation’’ in clothing construction. Her work features bold block colors in muted patterns on boxy, oversized silhouettes, with lots of pleating.  She manipulates knitwear designs into angular shapes, with structured folds and designs her fabrics to be reversible, with patterns on both sides.

Dora Li: MFA Womenswear Design, from Zhejiang Province, China. After completing her BFA in Fashion Design in China and working as an assistant designer at Ningbo Peace Bird Group, Dora’s collection was inspired by Asian children workers of the ‘40s who wore adults’ clothes, with awkward but touching proportions. Li blended age and gender in these menswear-style suit designs to develop an interesting silhouette with key elements, including a high waist and pleats. She used a mix of cotton, linen, silk shirting, and wool constructed from burn out fabrics created in collaboration with MFA Textile Designer Carly Dean.

Carly Dean: MFA Textile Design, from Indianapolis, Indiana. Collaborating with Womenswear Design student Dora Li, Dean was also inspired by the worn-in, mended feel of the workers’ garments. “I wanted to create a similar feeling in my textiles,” she said. “What most inspired me was finding beautiful and unexpected textures throughout the city.” Using a burnout technique allowed her prints to be created using texture. While a School of Fashion student, Carly interned at Abercrombie and Fitch, developing and designing prints for seasonal concepts.

Brandon Kee: BFA Menswear Design, from Salt Lake City. Brandon’s collection is a mix of oversized baggy cuts mixed with aviation-influenced details that pay homage to early ‘90s hip-hop and the Chinese anti-gravity pilot suits of the ‘70s. Cotton jacquards, reversed and stripped of color, create a beautiful textured blemish of yellows and purple tones. “I scrapped some items I thought looked pleasing to the eye and was able to rust-dye them in a manner that cohesively went with the flowers.” Kee was awarded a Teen Vogue Scholarship while studying at the School of Fashion.

Yolanda Chiu: MFA Jewelry & Metal Arts, from Taiwan. Created an eyewear collection that was used in the collections of MFA Womenswear designers Nina Nguyen Hui and Geumi Lee. Chiu created vibrant acrylic eyewear for Hui’s collection. Before enrolling at Academy of Art University, she worked as a jewelry and graphic designer in Taiwan and founded a private label, Yolanda C. Studio.

The Academy’s show brought together the individual visions of designers from all over the world and united them seamlessly. As the collections encored, the exhausted yet happy designers took their bows.  Perhaps Ben Ellis summed up his reaction, and that of his peers, best. Asked how he felt at the end of his New York Fashion Week debut, he replied: “High, alive, tired, grateful, humbled –  and ready.’’