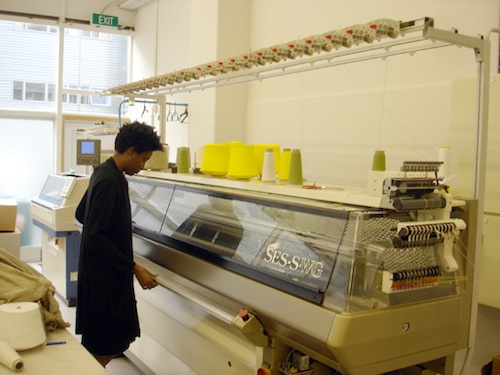 Fashion School Daily caught up with Stephanie Gelot, 2011 M.F.A. Knitwear Design, who was selected to spend this semester abroad at Auckland University of Technology in New Zealand through the fashion school’s exchange program. Before flying to New Zealand, she presented her women’s knitwear collection in the February show .

How do you feel after showing during Mercedes-Benz Fashion Week at Lincoln Center?
Honestly…I am dying to do it again. It was such a thrilling experience I hope to have the chance to do it again at some point.

You left for New Zealand soon afterwards, right?
Yes I did — a week afterwards. I haven’t even been back to San Francisco.

How is New Zealand?
New Zealand is great, though not as warm as I was expecting. The people are friendly, I am meeting people from all over the world.

How is the program?
The program is great. The facilities at AUT are really amazing. They have 2 Shima Seiki computerized knitting machines, and a 3rd, an intarsia machine, is arriving next week! As well as a 3d printer, a large scale digital printer and a laser cutter. There is so much to play with.

How is Auckland? Have you been able to explore a bit?
I really like Auckland. I have made some good friends here who have introduced me to the city’s growing fashion scene. Last month was New Zealand Fashion Festival which is their mid year fashion week, I went to a couple of shows and a launch party at Children of Vision, a local boutique and stockist of local and European designers like Eley Kishimoto and Bernhard Willhelm.

You mentioned a symposium. What was that about?
AUT has a facility called the Textile and Design Lab (TDL) which houses one of it’s Shimas and their digital printer. It is accessible to the students but also does development and production for industry professionals. The head of the TDL, Peter Heslop organized a symposium called “Get Knitted.” It was about the future of the knitwear industry both in New Zealand and abroad. Speakers included Sandy Black knit designer, author and professor at London University of the Arts; Nikki Gabriel, knitwear designer; Ricky Sciberras, a Shima technician and sales rep. from Ramsay MacDonald NZ; Neil Mackie from Woolyarns and others. Topics included the role of technology, and the potential of knitwear to fill the void of sustainability in the fashion industry. It was an incredibly exciting day, being part of the discussion of the future of knitwear and knitting technology.

How much longer are you there?
I will be here until mid-July.

Any plans for when you return to the U.S.?
I will be moving to NYC when I come back to the U.S. looking for a knitwear design position there or abroad.

Check out the Miss Gelot’s gallery of pictures: