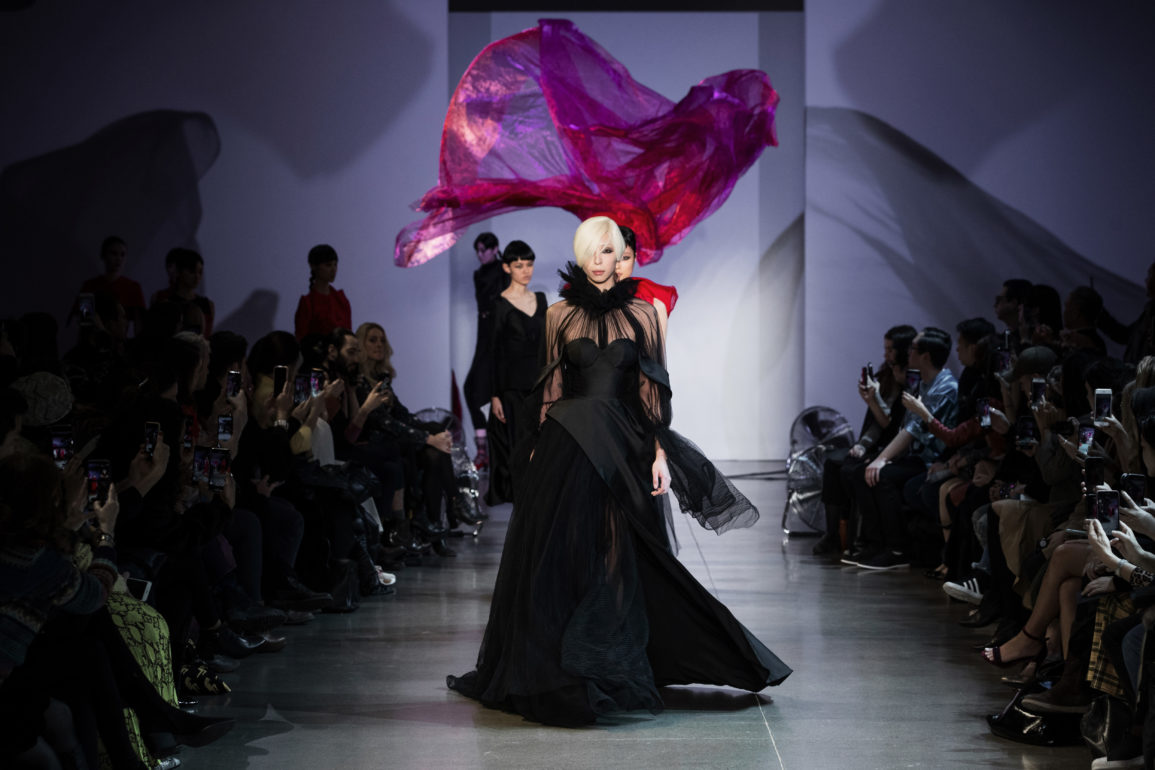 As attendees flocked into Spring Studios, after battling the unexpected icy elements, the contrast between the gallery and the incoming viewers was palatable. While the attendees appeared disheveled and unnerved from the snow and sleet, Phuong My’s emotionally charged and fiery themed collection, Sayonara, was completely different in its atmosphere.

Under the red mood lighting, two pieces of elongated fabric—red and pink—danced through the air as many strategically placed fans caused somewhat of a whirlwind at the beginning of the runway. In her debut showing at New York Fashion Week, Phuong My wanted to make a statement for the American market, while gracefully saying an emotive goodbye—or ‘Sayonara’—to her former fashion shows.

For many of this Vietnamese designer’s collections, the inspiration has centered around the fortitude and stout the Asian women in her life often concealed under a delicate façade. The Fall/Winter 2019 showcase remained steadfast in this influence, albeit edgier than former collections.  Refusing to be limited to certain available fabric choices, Phuong My was adamant about conveying luxury by outsourcing materials from partners in Paris, Milan, Hong Kong and Tokyo. The sculptural silhouettes made of wool silk, silk lace  and organza hit the runway in only three opulent shades: black, white, and red.

The ensembles were a cultural vision, playing off My’s Asian heritage. The play on intricate shapes, patterns and folds helped accentuate the bold statement the brand is making. A variety of A-line dresses stitched with two opposing colors on bias-cuts, tops with deliberate asymmetrical lines, gowns with exaggerated trains, and unconventional pairings, all embodied an amplified, bolder take on the designer’s softer designs of the past, while staying true to her overall vision.

Although this is her premiere showing at NYFW, Phuong My is no stranger to the runway.  The designer has been globally accepted, with showings at Vietnam Fashion Week under her belt—opening the ceremony in 2015 and closing it in 2016.  Two years later, this former student of the Academy of Art University took on the endeavor of being the first and only Vietnamese designer to show a collection at Arab Fashion Week in Dubai.

Having already graced the cover of Harper’s Bazaar and dazzled the pages of Vogue and Elle with her work, Phuong My is embracing the uncertainty of a new market and welcoming the challenges that it presents. While she may be saying sayonara to one marketplace, the American market is clearly ready to whitness the subtle beauty of Asian women encapsulated through My’s remarkably contemporary and austere designs.

Photos courtesy of Phuong My