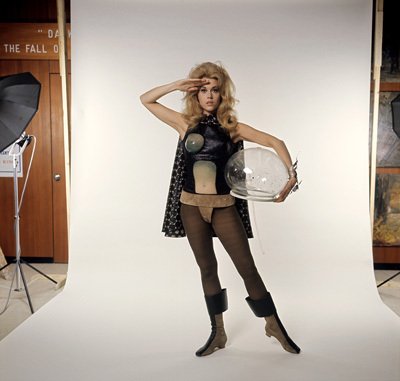 An image of Jane Fonda is probably the best way to start the week…especially if it’s of her as the title role of the iconic 1968 movie, Barbarella. The movie spawned a great deal of sexy sci-fi friendly inspiration for the fashion world.

We are posting an image from the movie with another intention: to celebrate the late Dino De Laurentiis‘s birthday (which is today). In addition to Barbarella, the extraordinary Italian film producer gave us a mix of popcorn-friendly fare and thoughtful cinema such as Serpico, Three Days Of The Condor, Conan The Barbarian, Dune, Blue Velvet, and, of course, the Academy Award-winning La Strada.

…but still, we can’t get enough of Barbarella. It’s campy, funky, seducing and, just plain fun: