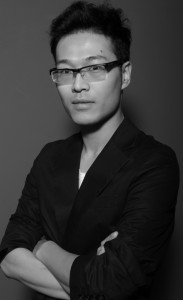 Xiang Zhang is from Shanghai, China, where he received a B.F.A. in Fashion Design from the Shanghai University of Engineering Science. He worked as an assistant knitwear designer at Nova Apparel Taiwan and as a senior knitwear designer at Shaghai Datura Fashion Co. before earning his M.F.A. in Knitwear Design from the Academy of Art University. Previously, he collaborated on a collection with fellow alumnus Louie Llewellyn, which debuted during the Academy of Art University Spring 2011 Fashion Show at Mercedes-Benz Fashion Week. For his current collection, Xiang was inspired by Plato’s philosophy that the highest form of beauty can be explained by principles of mathematics. He used Plato’s theory of the golden rectangle, in which the ratio of the long edge to the short edge equals the golden ratio, to determine the proportions of designs, as well as the number of stitches and their orientation within the pattern. He used cashmere, mohair, and silk throughout the collection.