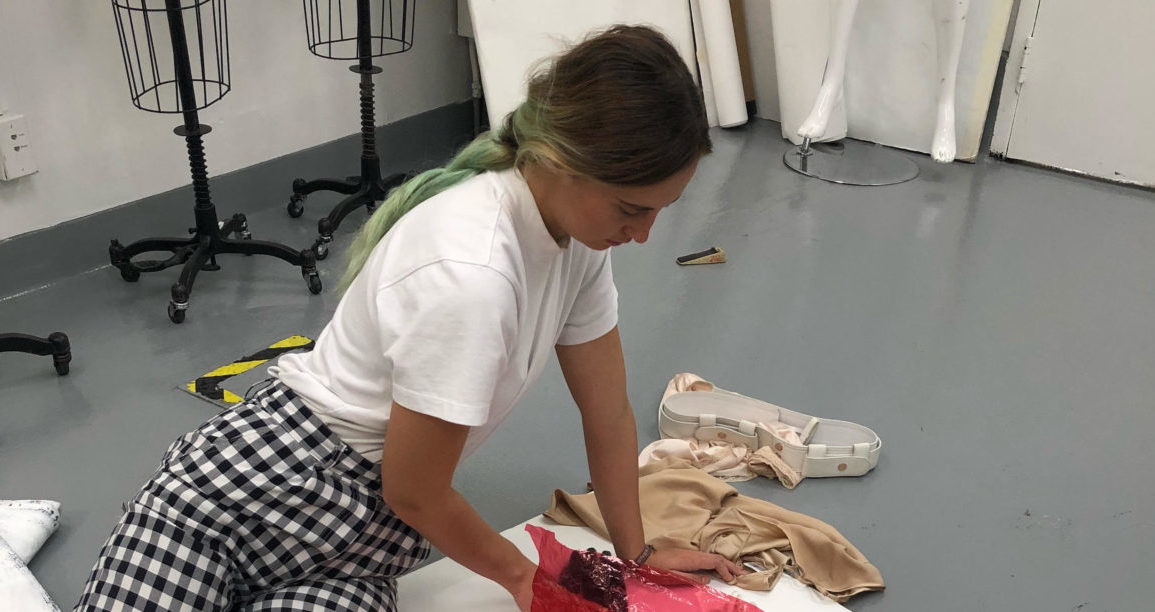 For college students, an exchange program offers the opportunity to broaden their horizons and learn about new styles and cultures. This year, Ella Shearman and Alina Zulkharneeva, from Kingston University in London, spent a semester attending the Academy of Art University in San Francisco. As the fall 2018 semester comes to a close, Shearman and Zulkharneeva reflect on their semester abroad.

For both, the chance to study abroad was appealing because it would help them gain a better understanding of the American culture. Zulkharneeva said she applied for the exchange program because she heard that the Academy had a strong fashion illustration curriculum. “The drawing aspect of my design is something that I’m really passionate about, and I feel that it is my strong side,” she said. “I thought that I wanted to take in the environment in this school in particular because America is just so different, and I thought that I’m going to combine my love for drawing with experiencing the environment.”

Shearman took into account some of the differences about the Academy’s curriculum. “We were both really drawn in by the idea of understanding the American market, because we are based in Europe,” she said. “To see how fashion is taught outside has been really different, and I’ve gotten an understanding of how marketing is more of a thing here than I feel like it is in the U.K.”

Some of the more challenging aspects of the program include adapting to their daily routine and the sheer variety of classes offered at the School of Fashion. “I find it quite hard changing gears all the time. I have four different classes that aren’t related, so I am constantly going from different head spaces, which I found quite difficult,” Shearman said. “The nature of classes in the U.K. is more flowing, and you all do the same thing. You can put yourself into one mindset for a longer period of time, and that’s why it takes me less effort.” It seems that both students aren’t afraid to challenge themselves.

Once the students had settled into their routines, they made themselves at home in the city. “It’s really lively,” Zulkharneeva said of living in San Francisco. “There is always something happening. I like that, besides its size, it has so many different neighborhoods, which have their own thing going on.”

She notes the stark contrast between what is considered fashionable in London compared to San Francisco. “People in San Francisco are very practical,” Zulkharneeva said. “I read somewhere that in this city, it’s not really encouraged to wear something really fashionable; it’s more the idea that you wear your own style. Pairing an outfit with a start-up hoodie is more appreciated here than wearing a cute Celine coat or something like that. You get more compliments on the hoodie than really fashionable items.”

Both Shearman and Zulkharneeva have been interested in fashion since childhood, but they came to the field in different ways.

Shearman became interested in fashion while playing with dolls during her childhood in England. “I spent a lot of time making clothes for my toys: Barbie dolls. My family friends bought me a book of paper fashion. You cut out stencils of clothes and make little outfits,” she says. “I was always doing art classes as a kid, so I guess dressing up my dolls … just continued and became what I was focused on.”

Zulkharneeva came to London by way of Russia, and her family is very well-traveled.” I was always surrounded by art and design, and since my family took me with them while they were traveling, I was constantly influenced by multicultural places and locations,” she says. “I was always paying attention to how people were dressing.”

She attributes her personal style to these childhood experiences. “My design aesthetic comes from a couple of different coats that I use. One of them is utilitarian. As a kid growing up in the post-Soviet Union, surrounded by post-Soviet remains, I would always pay attention to the architecture, because it was very constructionist and brought me to a really utilitarian style on how I see things.”

Academy of Art University’s broad curriculum offered a stark contrast for both students — both mentioned the focus on the business side of fashion.  “This program has made me think about design more in terms of marketability,” Shearman says. “There’s a huge influence here on understanding more practical things. Those are helpful. I also feel that my drawing skills have gotten a lot better, so that helps me illustrate.” By contrast, the fashion program at Kingston University emphasizes a specific design process that students must follow with each assignment, which includes steps like draping and 3D imaging. Zulkharneeva adds, “My classes gave me a lot of insight into the business side and how to approach those who work in production. It really makes you think about the customer, because I’m going to be selling ideas to a fashion house or selling ideas to business people. It’s challenging, but it gives you a new insight into the industry from the marketing and mass production side.”

While Shearman and Zulkharneeva have not had a lot of time to explore, they have taken the opportunity to see some of what the Bay Area has to offer. “There’s so much to do outside of the city,” Shearman says. “We haven’t had much time to travel outside of the city. But when we have, it has been really interesting to see the variety of things available to do in California. It’s such a cool place to be.” Both want to visit Los Angeles and the Grand Canyon in Arizona, and agree that the exchange program would benefit other students if it were longer. Adapting to a routine in a foreign country can be intimidating, but Shearman and Zulkharneeva have grown fond of their temporary home, and are enthusiastic about carrying what they’ve learned into their future studies.