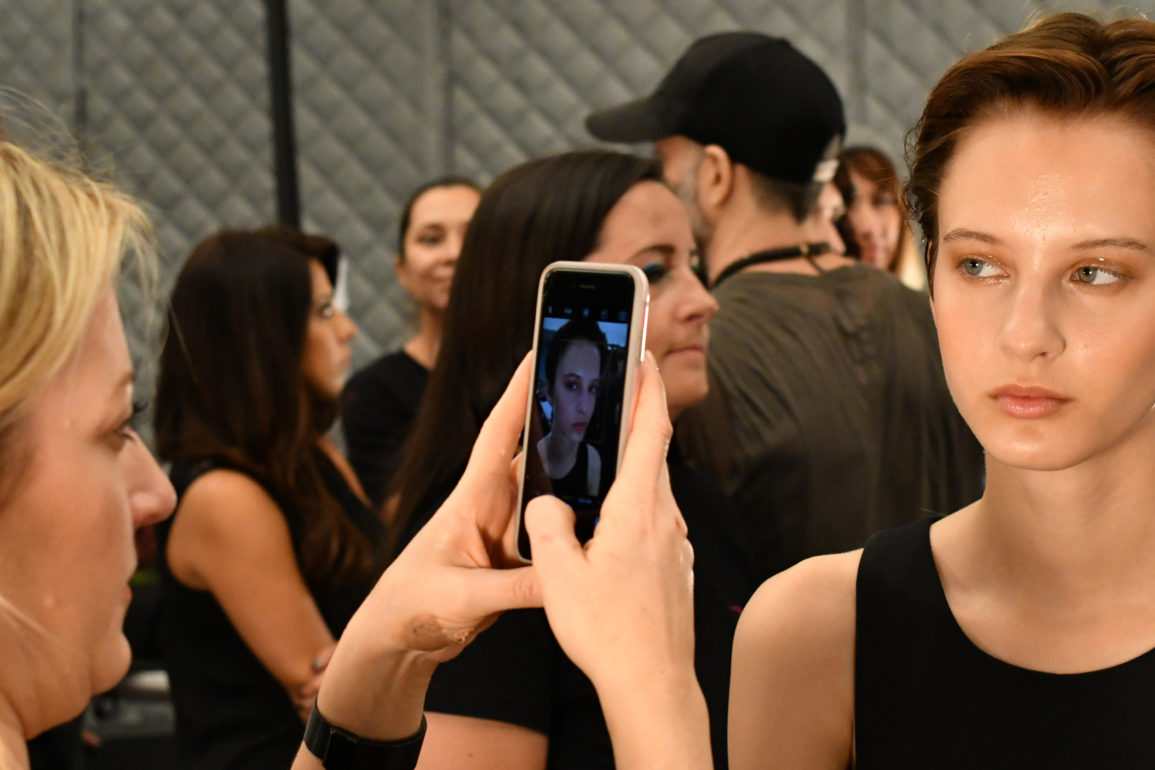 A model prepares at the Academy of Art University Spring 2017 Collections during New York Fashion Week at The Arc, Skylight at Moynihan Station on September 10, 2016 in New York City.

Beauty no longer requires sacrifice! With the roaring hum of blow-dryers in their ears and the chattering of hair and makeup artists fussing busily over them, runway models with relaxed demeanor spent their time texting and checking Instagram accounts on their mobile phones while Victor Cembellin, MAC Pro Senior Makeup Artist and head of makeup at the Academy of Art University School of Fashion Graduate Fashion Show that took place at New York Fashion Week on September 10th, 2016 could be heard shouting praise: “David, that highlight is looking amazing!”

It was scattered across an expansive black and white canvas of makeup bags, fluffy brushes and orphaned water bottles, and manifested in bursts of colorful lipstick tubes in sugary pinks and cheerful tangerines. Further peppering the fray, were eye shadow palettes and paint pots in warm nudes and neutral browns.

Under the direction of Cembellin’s seasoned seven-year collaboration with the Academy’s School of Fashion, the MAC Pro Cosmetics team worked together in complete synchronicity, orchestrating look after look of young and naturally beautiful girls. Cembellin had a vision.

In a lulling moment, between a water break and a quick bite of his pesto sandwich, I approached Cembellin to learn more about the makeup looks he designed for the show.

“One of the main inspirations were these great Richard Avedon shoots for Versace back in the 90s when Kate Moss was first discovered. That was the anchor, the grounding point of where we started with the makeup. What we’re trying to do with the girls is to create this newly-born, sporty, young, not-too-grown up look,” said Cembellin.

Beauty has its own vocabulary.

Makeup artists first channeled their magic through the eyes. MAC’s mocha-grey paint pot namely “Groundwork” provided the base on which the rest of the eye look was built. Eyelashes sans eyeliner and mascara further amplified a youthful, innocent makeup style while MAC Studio Eye Gloss in clear sealed the makeup eye design with thick, ultra-shiny and lacquered eyelids.

While the eyes were setting, the focus turned to lips; a charming combination of MAC’s tangerine-pink Patentpolish Lip Pencils in the colors “Teen Dream” and “Clever” gave lips a girlish glow with a posh and hydrated finish. I was spellbound. As a fellow makeup enthusiast, I couldn’t wait to try all of the products on myself.

With any makeup routine, the crowning glory lays in the skin.

“It’s a skin story… rather than contouring which has been this massive trend, for runway, the lights hitting things that glow off the top of cheekbones tend to be more interesting,” says Cembellin. MAC’s Cream Colour Base formula in the colors “Pearl” and “Shell” applied to the higher planes of the face, artfully combined with MAC’s Sculpting Powder in “Bone Beige” placed under the cheekbones to bring out lightly flushed cheeks and give skin a dewy and supple radiance; the result was a revival of youth and an aura of naturally beautiful skin.

There was a sudden, but calculated switch-up in hairstyling concepts that kept the head of Aveda’s hairstyling team, Jon Reyman, working up to the final moments before the show.

“We often do very strong hair and makeup looks. We had created this really big texture that was edgy and strong… but the [test] model had tried on a number of the different clothes and it didn’t fit the rest of the collection. So we tried something new, and what we did [for the runway] was different. We gave the hair a little bit of texture so that it wasn’t too clean or too fresh, but still young, and nuanced, and curated… yet specific,” explained Reyman.

Inspired by the minimalist makeup looks created by the makeup team, Reyman revamped the hairstyling concept in record-breaking time. Almost, as if by magic, tresses de-frizzed and flyaway’s vanished as the Aveda hairstylists aligned with the new vision like clockwork. It was inspiring to see their professionalism under pressure, skill, and efficiency, especially on the part of Reyman, as he scooped up a pair of shears to fine-tune a models hair into a precision-perfect, runway-ready cut.

Yes, it might be a cliché, but the show will and always must go on.

Hairstylists and makeup artists backstage huddled around a monitor. The mood was somewhat bittersweet as the models took to the catwalk for their closing procession. The realization sets in for the artists backstage that the hours of work poured into the beautiful faces and perfect hair of their model canvases are nearing their finale. As the day ended, I couldn’t resist to draw one key parallel: the cycle of fashion weeks and shows from season to season is actually not unlike a beauty routine itself.