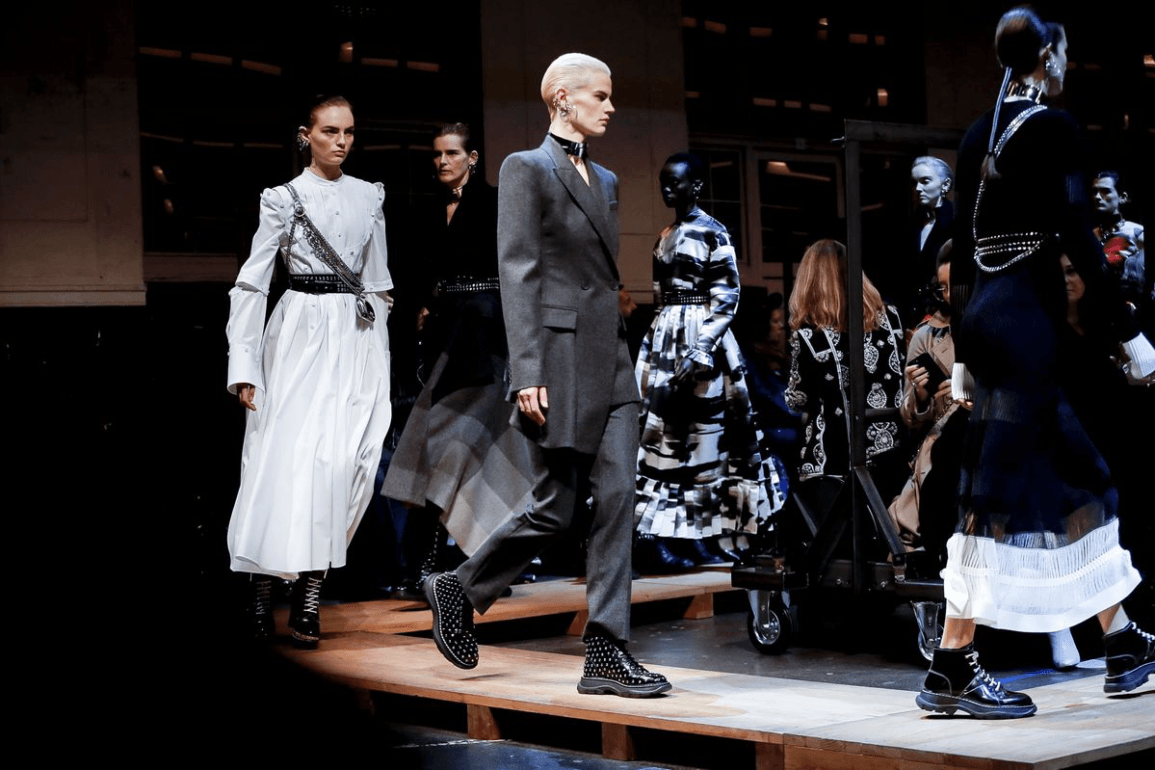 Tradition is always the backbone of the collections from Alexander McQueen, and this time Sarah Burton, the Creative Director behind the fashion house, used the theme to take us back to her roots.

“I like things to be modern and still have a bit of tradition,” the late designer Lee Alexander McQueen once remarked. Case in point – the very memorable Horn of Plenty collection (FW09) in which the gifted visionary took Dior’s New Look and totally deconstructed it by using fabrics and techniques in his own unique way. McQueen’s handling of the patterns and the fabrics could be considered ‘upcycling’ before this term became widespread in the high-end fashion world. As always, McQueen was ahead of his time, while faithfully keeping tradition alive.

Fast forward 10 years – for Alexander McQueen’s FW19 collection, Burton, took us to her homeland and narrated, through the collection, what it means to be born in Northern England. For Burton, mill towns and the wild countryside are the trademarks of her birthplace. There, many of the finest wool fabrics in the world are ufactured. The place and the memories, as well as bolts of cloth and men’s suit tailoring, were the inspiration for the collection.

Every look on the runway was perfectly constructed and deconstructed at the same time. Exceptionally made working-class suits looked both classic and punk, masculine and feminine. Black, fuchsia, and red taffeta dresses were extraordinarily crafted, and bore such a strong resemblance to blooming roses, that you could almost smell an intoxicating scent in the air. A Prince of Wales coat and a white cotton poplin shirtdress were inspired by leftover fabrics, further echoing McQueen’s upcycling message.

A long silver dress, made from loom heddles that were cut into sequins, was created to mimic the sound of the factory floor whenever the dress was in motion — another statement, reminding the audience that even parts of machinery could be a great source of inspiration and creation. As far as the accessories were concerned, industrial textures  completed each look with chains worn across the body, multi-hoop earrings, cuffs, chokers, and rings. On the models’ feet, galosh-style boots and chunky high-heels complimented the collection’s aesthetic.

As with all McQueen collections, this one also had a story to tell. This time the famous “Made in England” trademark met the harsh aesthetic of the Industrial Revolution and the romanticism of the Bronte sisters. The Punk movement rubbed elbows with the 15th century’s War of the Roses, proving that both are a substantial part of British history. This collection presented, in the most inventive way, the polarities of soft and hard, of strength and vulnerability. It also had a strong message for modern-day women; “I want to empower women. I want people to be afraid of the women I dress,” McQueen used to say; Burton clearly adopted this attitude – creating bold, striking silhouettes.

Once again, Burton proved that she is an excellent a storyteller, just like the founding designer was, yet in her own Northern English way, borrowing from everyday mills and the wild countryside corners, as well as her country’s history, to create a finely-crafted statement collection.

Simon Ungless, Executive Director of the School of Fashion, recently gave an interview to the French fashion magazine Madame Figaro and reminisced about the years when Sarah Burton was his student at London’s Central Saint Martins College (in fact, Burton’s work with McQueen began after Ungless introduced the two). “Sarah is passionate about technique, quality, craftsmanship,” said Ungless; his words certainly rang true in this collection.

In June, Burton, will be honored by the CFDA (Council of Fashion Designers of America) and receive the 2019 Valentino Garavani and Giancarlo Giammetti International Award for Alexander McQueen, an award honoring charity and the promotion of culture and art.