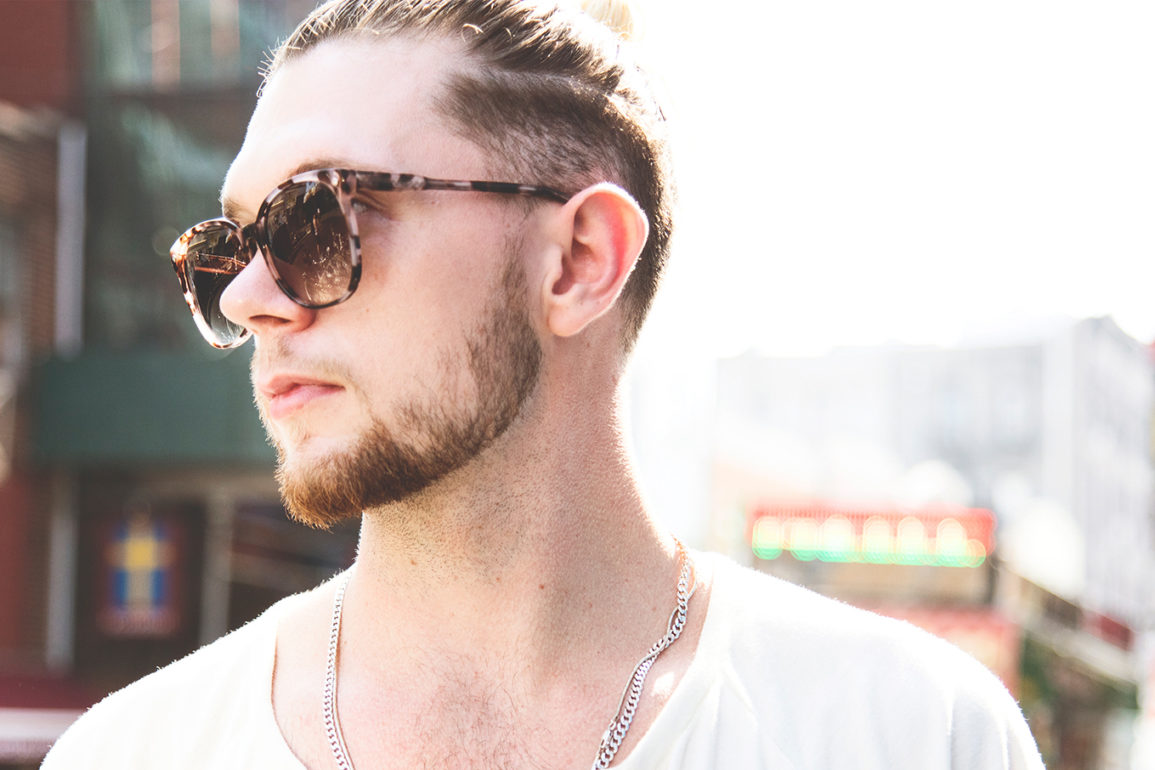 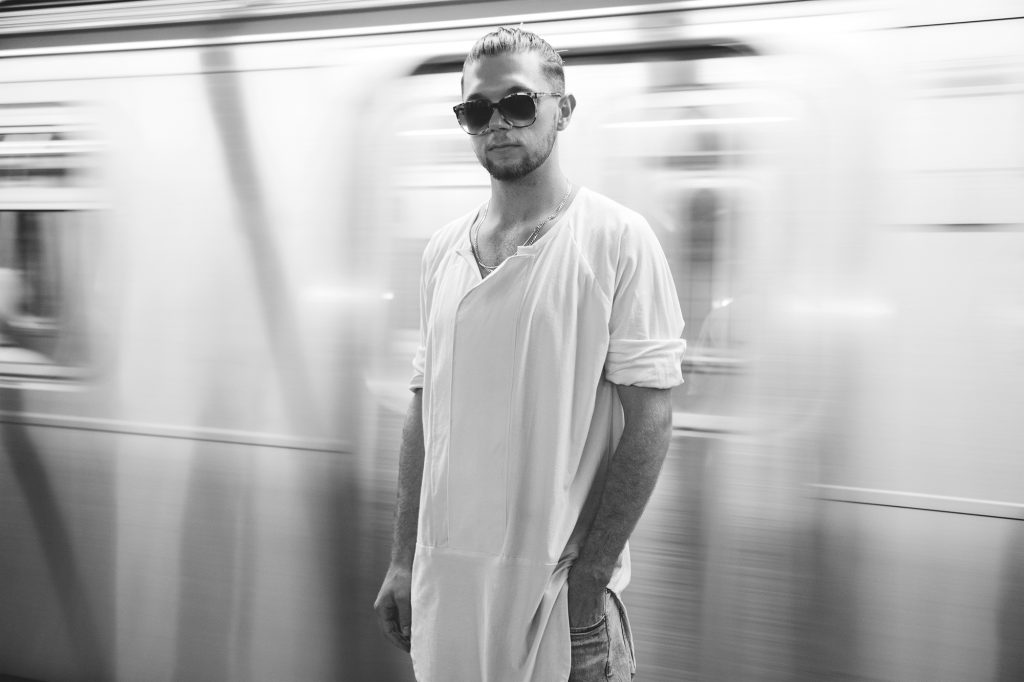 “I couldn’t imagine being here a few months ago.” said Kee, when referring to his first trip to New York City. “I try hard not to have big expectations, but it’s way bigger than I imagined. No matter where you go there is city environment all around you.”

“The things that I do, the things I see, all transpire into my inspirations for each of my collections esthetic,” said Kee, “I would like to think what I do is an art form. I don’t want to be pretentious with the terms, but I like to think that I am a creative that produces something that will inspire people. Making cloths comes natural to me.” 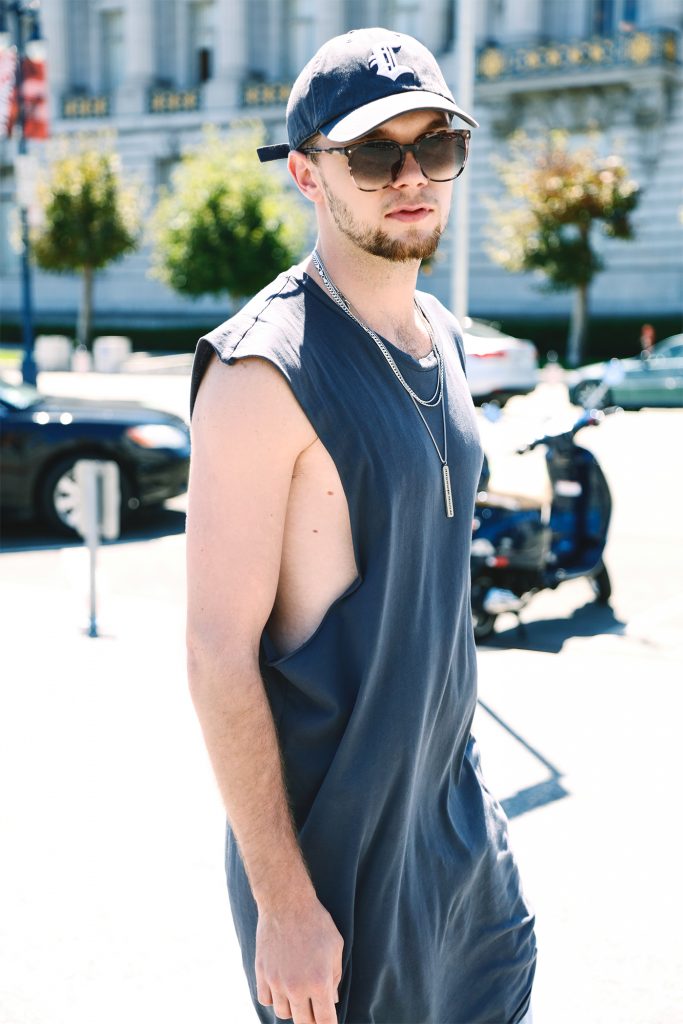 Kee’s ambitious personality creates collection worthy design elements from color palettes that inspire him to draw silhouettes right on the spot. He takes inspiration from people’s personal street style and even finds muse from the swagger of hip-hop music.

His Airbnb studio apartment located in the heart of Brooklyn, was a hidden treasure where Kee stayed for a week leading up to the show. It became an ideal place for him to soak in all of the urban city’s culture for future collection ideas.

So what exactly was it like to be in Brandon’s shoes for the day? 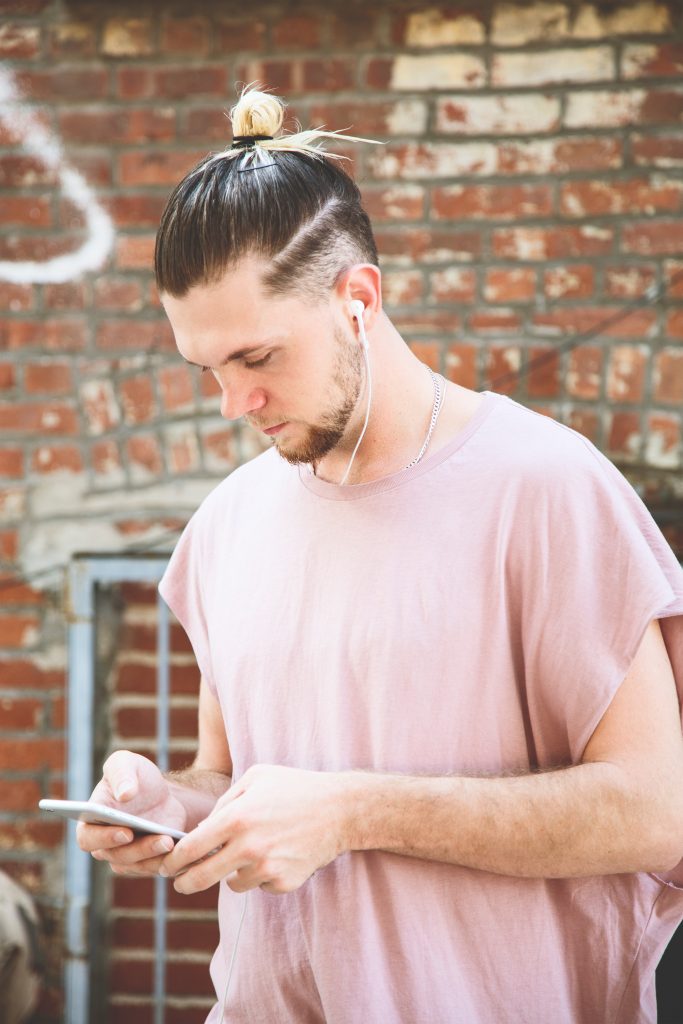 We followed Kee for 12 hours. What we learned amazed us. Just picture the complete opposite of what you would imagine an anxious designer to be. He wasn’t at all frazzled or stressed out— he didn’t let others impose their anxiety upon him. Instead he exuded a sense of confidence over the course of the day. He was in a joyful mood; the perfect mix of a calm, cool and collected individual, to say the least. 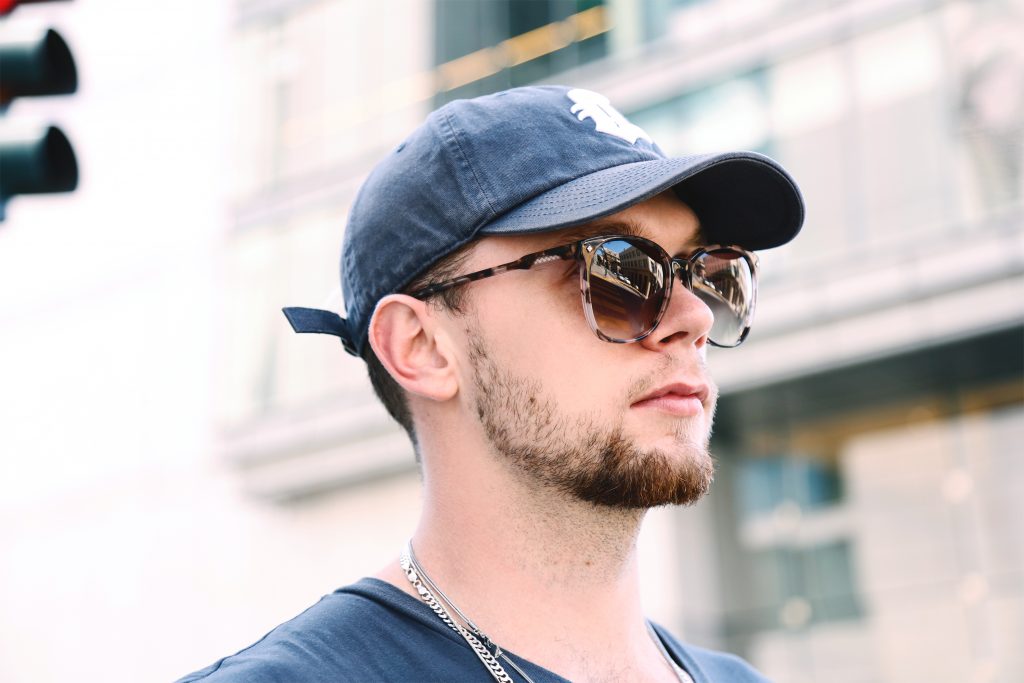 “A typical day for me is that I first get my mind right,” said Kee, “I might wake up to read the paper or flip through a magazine I just bought. I like to eat a healthy breakfast and maybe get some exercise in before I plan out my day on paper.”

9:33 AM Get the morning juices flowing.

Brandon sat out on the balcony with his girlfriend Dina Lam, where they both had some scrambled eggs with a slice of toast and fruit bowl on the side. And while he doesn’t discriminate between his refreshments, he’d rather have a fresh cold glass of orange juice versus the typical water or morning coffee choices. 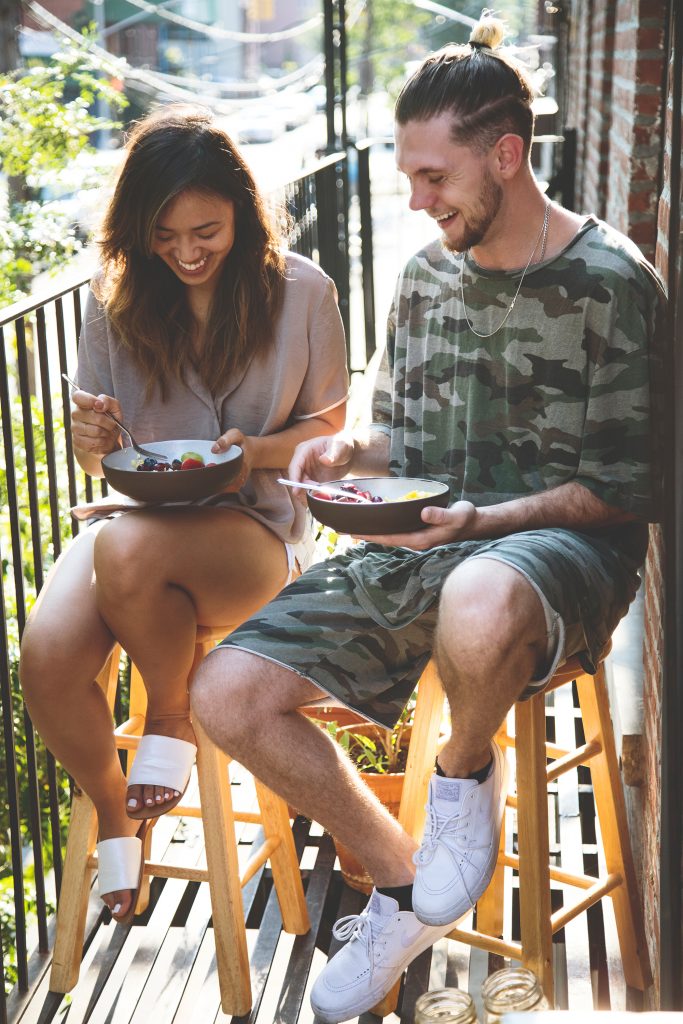 During their morning date, Lam mentioned that she was planning to graduate from the Academy within the next year or so. She actually just started drafting designs for her graduate collection and plans to build samples out of muslin this fall semester.

Lam is more than Kee’s cheerleader and supporter— she has become a key part of his team as the two have begun working more intimately over the last year. She helped assist Kee in the cutting and sewing details for this collections final runway pieces.

The two designers fed off of one another’s energy, which created a unique synergy radiating from their personal bond. They used their time spent together in Brooklyn to gain further inspirations for future projects, possibly even ones that they will collaborate on together.

10:45 AM Recognizing time is always a factor.

Brandon admits that some days are busier than most, so he may reduce or scratch his workout routine if he needs to accommodate for time. But with the emotionally impactful day he had planned, his regular minimum of 30 pushups and a light jog would most definitely not be missed. 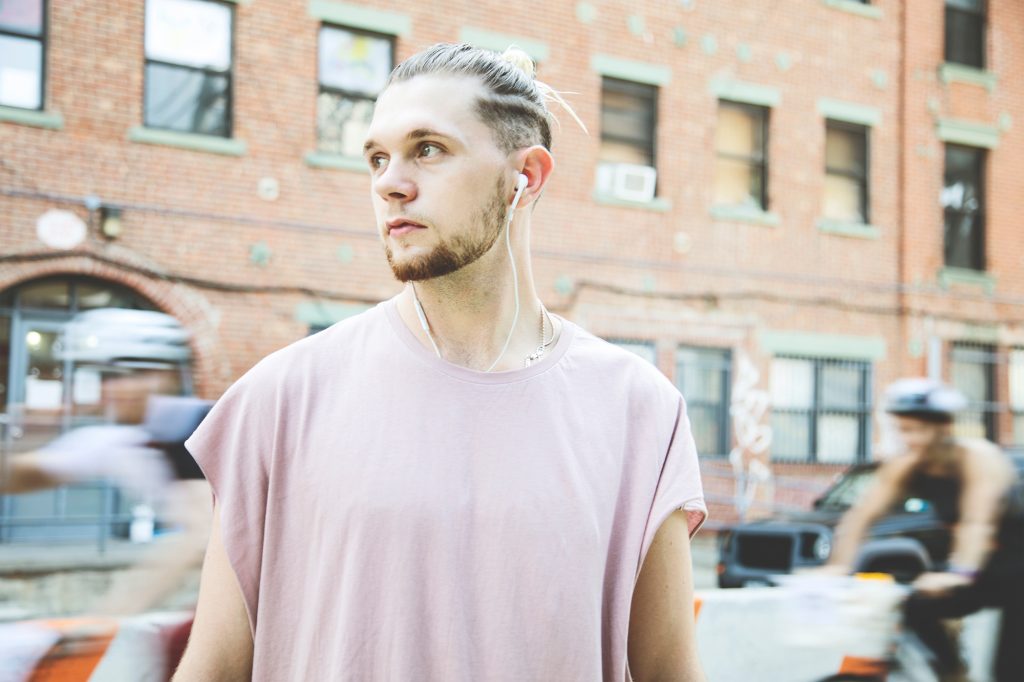 “I’m realizing that taking more time to take care of my skin and body are equally as important as me taking care of my portfolio.” said Kee. While he doesn’t have a set daily beauty regiment, he mentioned that Lam convinced him to get his first facial before he faced NYC for the first time. 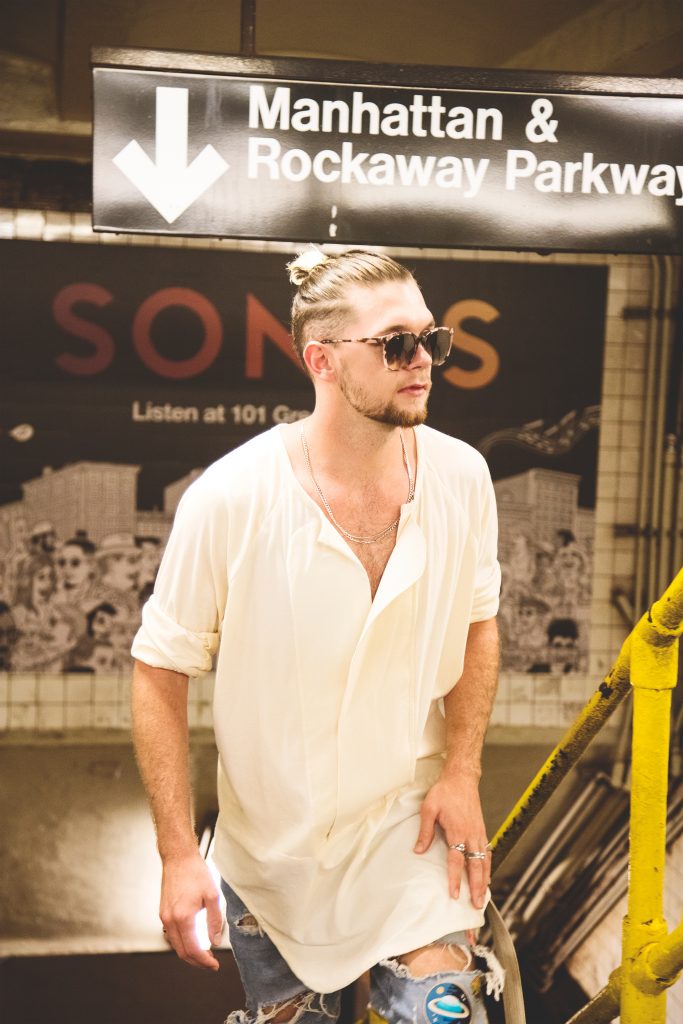 Brandon hopped on the L-line subway train that brought him in close radius to the Kimball Studio, a space the Academy rents for designers to put finishing touches on their collections. He, as well as the rest of the designers spent the next few hours making final design alternations and helped one another out where they could. Here comradery trumped anxiety. 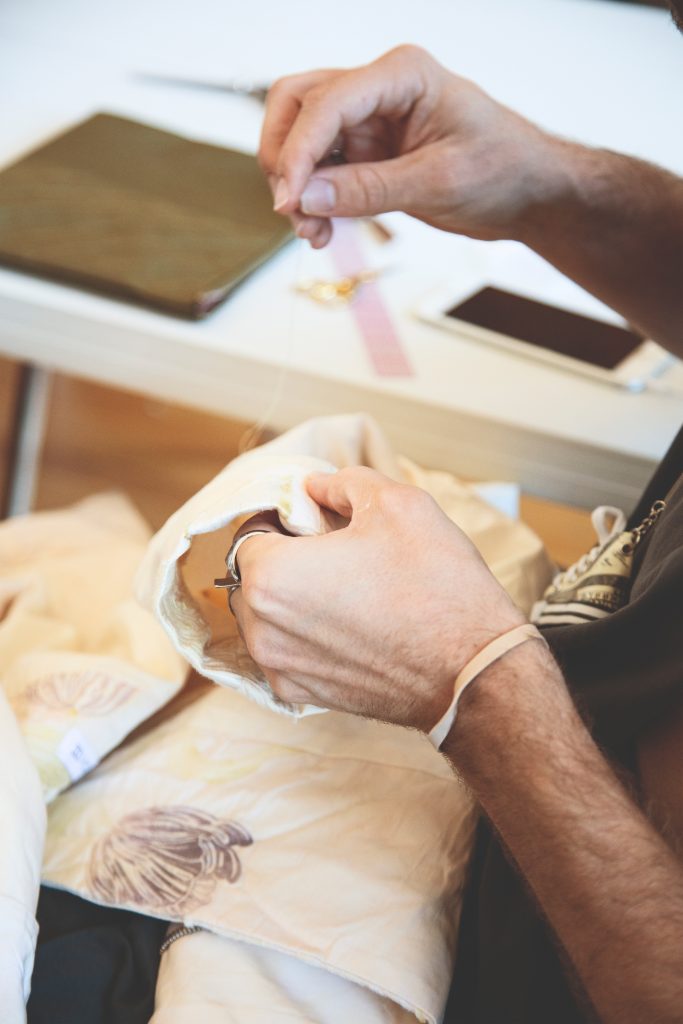 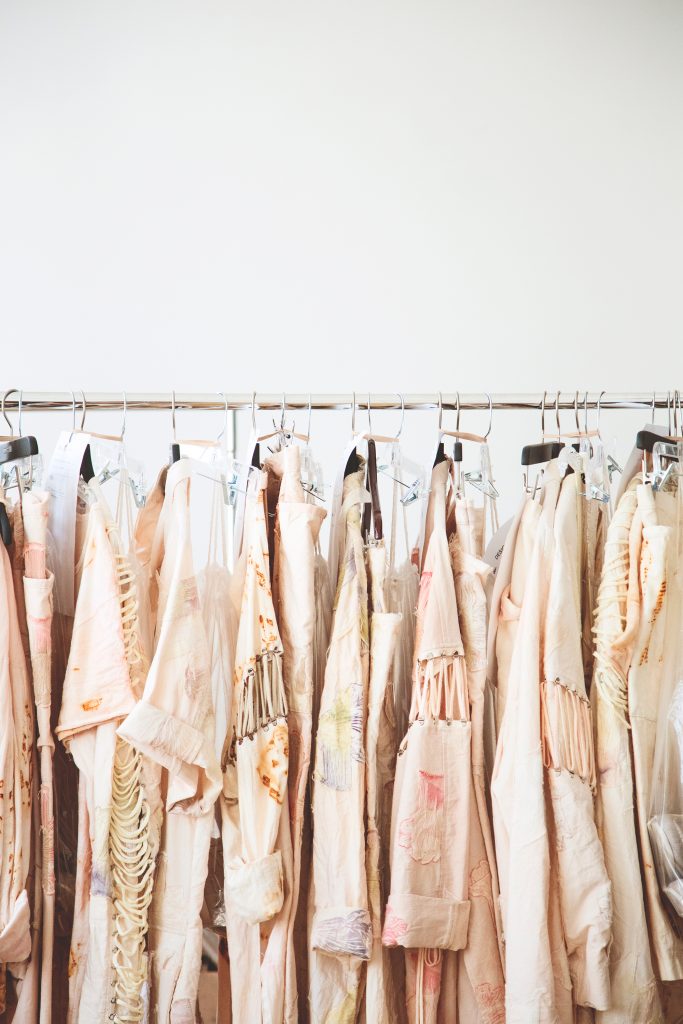 There were a few people who came up to Brandon during the prep for the show that gave him praise for his outfit choice. 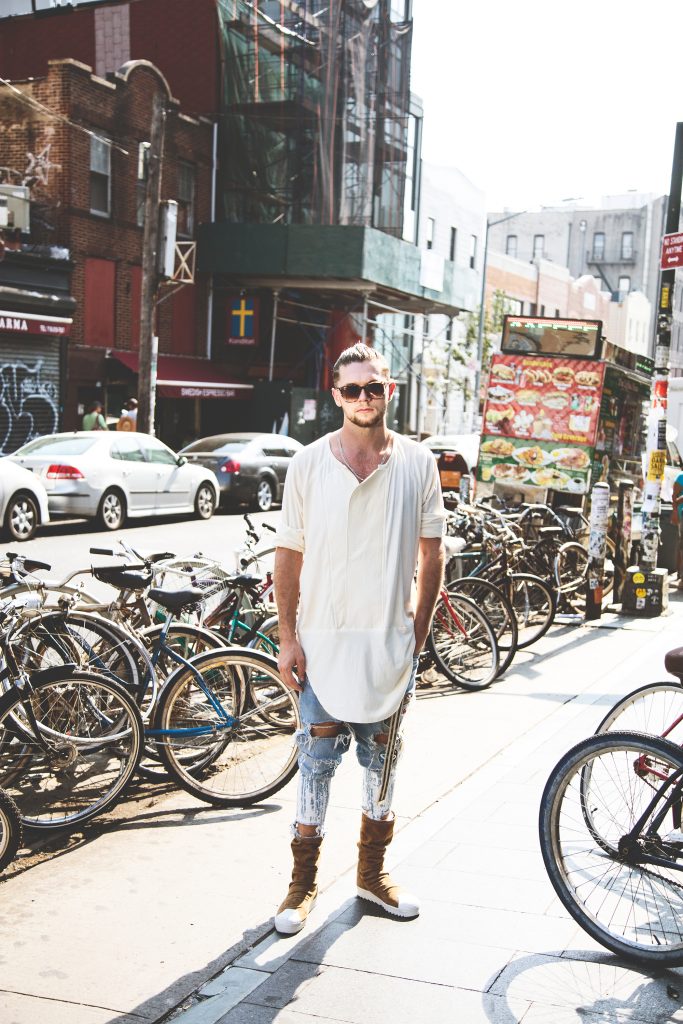 What he wore to the show: Bottega Veneta tortoise sunglasses, a custom oatmeal colored longline tee (a piece that he previously removed from his last collection,) a custom screen printed denim from Zara with added patches, and tan Rick Owen boots. He was also wearing two chain necklaces (pieces that he never takes off) which were given to him a few years ago by his mother.

6:55PM An honest reflection before the show. 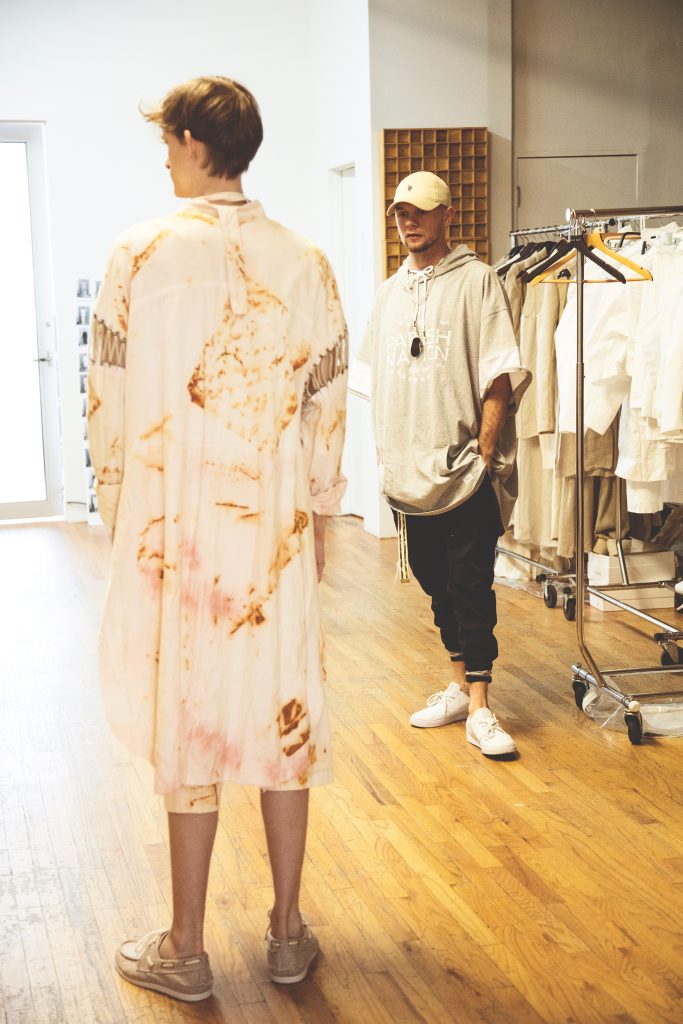 “The biggest roadblock was that I knew what I wanted my silhouette to be; I had a vision for what I wanted to send down the runway, but I just didn’t know what it would be fabrication wise. It took me months of sourcing and traveling to find the right fabric. It ended up being a couple fabrics with the right treatment that made the collection.”

8:30 PM A collection worth noting.

The reverse Jacquard material and blend of aviation inspired silhouettes felt very intuitive for Kee. Apparently, the washed out dye process, which was a mixed batch of both dyed before construction and dyed after, captured different spectrums of pinks and purples of the affixed floral patterns post treatment completion. The fabrics original color was yellow green.

Kee took an old metal Victorian grate and broke it down with salt and vinegar to rust the metal, in which he used it for a textured stamp to dye parts of the fabric.

While Kee was originally expecting each piece to be stiff and rugged in his preliminary vision of the collection, the clothes took on a life of their own when he began to construct them. During this phase he was able to bring his concepts to reality by morphing his artistic voice to match his original intention.

When the pieces finally hit the runway, the collection he envisioned aligned the Airforce jumpsuit ruggedness and blended with a soft dusty pink pallet to achieve a harmonious balance of polar opposites. The super drop crotch and tapered leg paired with oversized layers resembled the parachute needed to make it safely to the ground. And the laced strings found on staple pieces in the collection resemble the strings that form from a leftover inflated suit.

Needless to say, the final run applause of the packed venue, sealed the moment for Kee; the end is just the beginning. 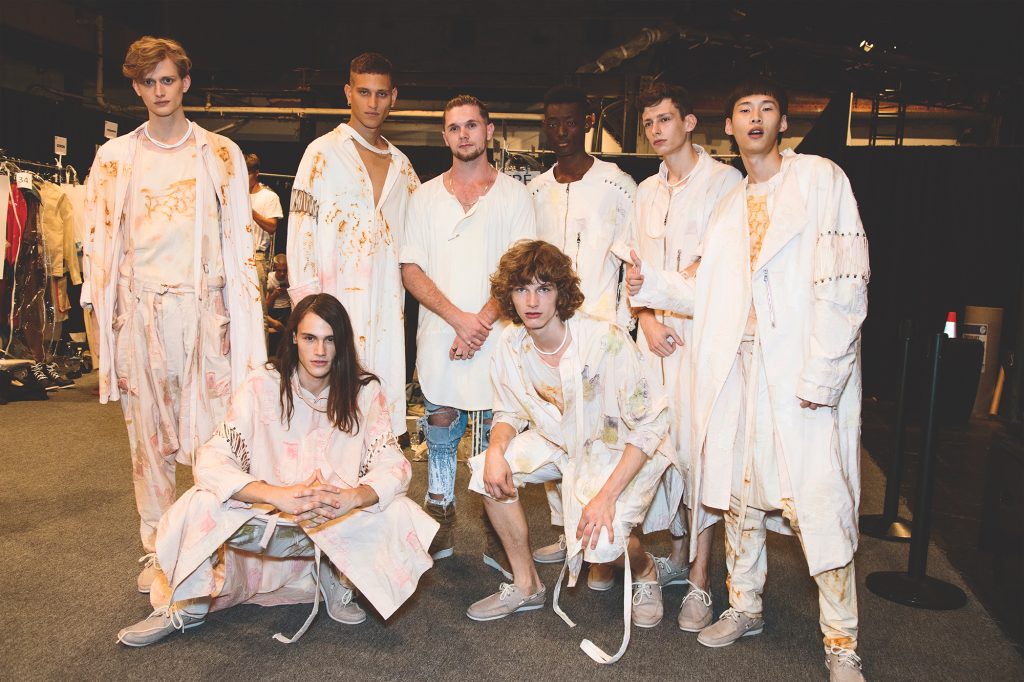 “I think it’s important to keep in mind where you come from, your beginnings. And that it’s okay to make mistakes,” said Kee, “I think from your mistakes is where you find your greatest accomplishments.”

Photography by Danielle Rueda, Styling Lab Technician for the School of Fashion.