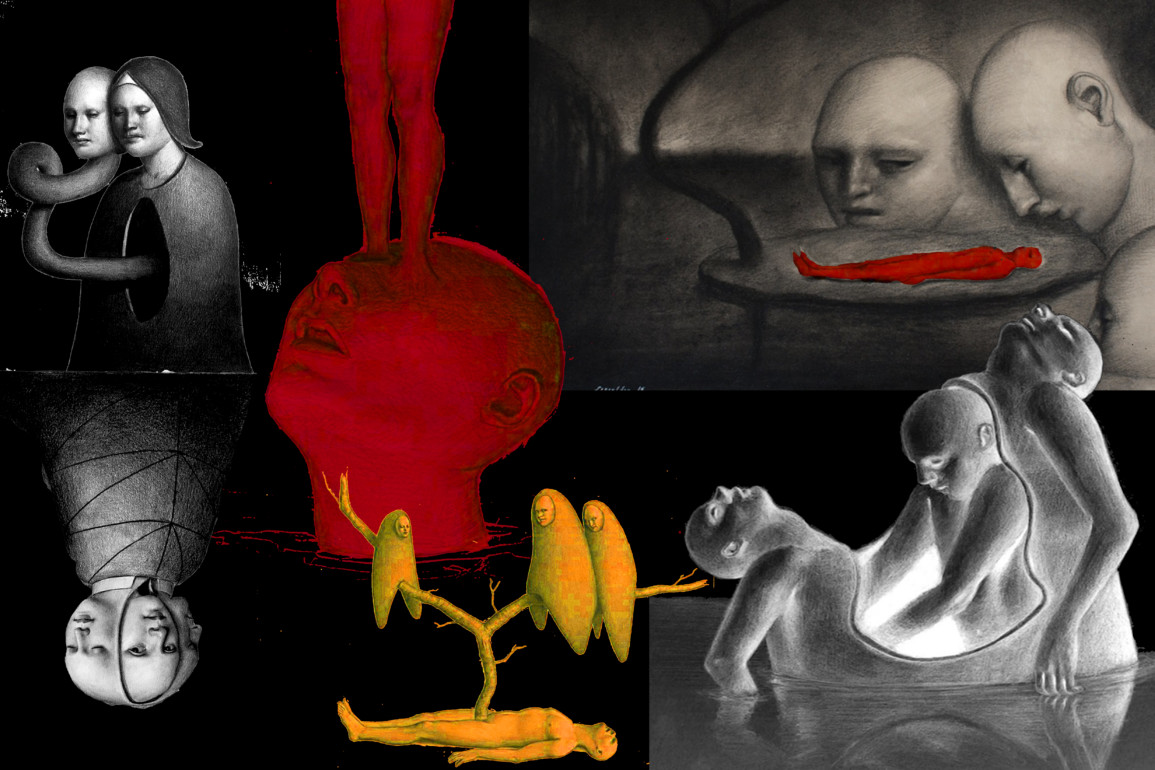 Inspired by disturbed faces and amplified lucid dreams of its creator, BFA fashion designer Kenneth Brody McCasland created an avant-garde collection driven by imagery drawn from his subconscious. Conceptualized and constructed to portray the effects of sleep paralysis, he explains how it feels to be trapped in-between dreams and wakefulness. “[It’s when] the body is left behind and taken over,” he says. “[You’re] free to explore feelings [you] can’t recall when awake.”

Taking inspiration from an otherworldly reality, McCasland often transports his designs to whichever obscure world best fits his vision. In this collection, he summons an in-between world, a sphere where dream and reality meet. To visualize this, a black vinyl pleated skirt is belted at the waist like body armor so the body is compressed but protected. It reminds us that something lurks in the night, and we’re given the power to feel it, much like the smoldering creatures in sketches by illustrator Tony Viramontes.

To further distort reality, he incorporates obscure silhouettes, shaped by hollow circles and semicircles, fitted at the wrists, necks, thighs and ankles that restrict movement around different body parts. “It’s not that I’m being dishonest,” McCasland says, quoting his perpetual inspiration, Stefani Germanotta, “It’s just that I loathe reality.”

The collection’s color palette has been narrowed down to earthy mustards, deep maroons and stark blacks. The woman wearing these clothes is bold, feminine and sensual, and she walks into the night with a moonlit, blank face. The holes represent the mystery of our minds, things that are there but we can’t see, and memories that are lost forever.

The garments are crafted with such meticulous attention to detail, with McCasland building the skeleton for his clothes before assembling them. Semi-circle rings are made out of corsetry bones, and backed with fusible horsehair and buckram to strengthen the structure. Mega-sized three-dimensional shapes are seamlessly incorporated into the collection to give an impression of restricted movements, a primary effect of sleep paralysis.

His silhouettes are overwhelming, exaggerating the body’s form, and feminine lines are juxtaposed with sharp shoulders and draped fabrics. This is a collection brought up from the depths of the psyche; a subliminal concept, born from the idea of impracticality and formed into garments that are fully realized. Look hard enough and you’ll find the half and full circles start to creep into your mind, pushing you slowly into another state of being.