I own one pair of jeans. This means that indiDenim’s brick and mortar launch party was either an event I really needed to go to, or really didn’t.

Regardless, I headed over to 440 Brannan (a love because they also carry Christopher Collins and gr.dano, alumna Jill Giordano’s line) to see what was in store. The post cards claimed that I could get perfectly fitted jeans, just for me! Considering that I only have about 20 inches of leg, I kind of wondered if I could get a half pair. Or maybe half off? 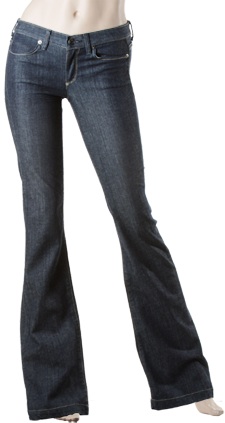 I ‘built’ these “fierce class” jeans on the indiDenim site. They’re made in the U.S. and look like the one pair in my closet.

I have to admit it was a fun event. There were many people in the crowd wearing measuring tapes around their necks like Mardi Gras beads, but I never quite hunted down who I needed to in order to get fitted. I did have time to check out the various denim swatches (I’m a sucker for gray denim, which they didn’t really have) as well as the pocket varieties for the jeans. It made me feel a little like a scientist in my own denim lab. (I’m also a sucker for industrial sewing machines and drafting tables.)

Of course, I also checked out the cupcake table, which was strategically positioned next to promotional cards that read “Designed to fit… Every cupcake you have and have not eaten.” I dare you to guess how many cupcakes I ate.