So you went to New York Fashion Week, what did you think?
I really loved fashion week! There was a great energy in Bryant Park. I think I ended up spending a few hours in the park each day. I would sit in the park for hours just drawing. I really loved the excitement all around the place.

Favorite thing you did while in New York City?
My second night in New York, my brother, my best friend, and I were in Soho and saw the lights in the sky from the 9/11 memorial. We decided to walk from Soho to the Trade Center, so we just followed the lights and tried to navigate our way through the city. It was amazing walking through the city, and a sobering experience to see ground zero.

What’s your dream destination?
oooo. Well that’s a tough one, there are about three places that would be a dream to go to. I’ve always wanted to go to Iceland. I think it would be an amazing place to see. Also Paris and Tokyo are in my top destinations. Everytime i think about those locations, I get really excited.

Your great escape?
hm… well, I would love to make the great escape into some of my paintings. That’s usually how I come up with my ideas for paintings. I sit and think, if I could be anywhere or if I could be doing anything at that moment, what would I be doing, and then I paint it. It’s my way to escape and go on any adventure I want to do…. but at the moment, my great escape is out of the smoke filled skies and the snowing ash of southern California.

What are you working on now?
I’m currently working on a few projects. I just finished up a 6 ft high by 5 ft wide and 1 ft deep
layered display. I’m getting geared up to do a window display for a new boutique in San Francisco called Eco Citizen. I’m really excited to work with Michael Carbaugh and get going on the project.

I’m also working on an illustration of John Galliano’s latest collection as a test case on developing some new media techniques, working on blending photography and illustration.

What’s playing on your iPod?
“In Rainbows” the new Radiohead album has been on repeat right now on my iPod. I really can’t stop listening to it, it’s amazing. I’ve also been listening to “The Shepherd’s Dog” by Iron & Wine; it is another one of my favorites right now. Also been listening to Midlake, American Music Club, Air, Martin Grech, Sigur Rós, and Kent alot lately.

Here are a few drawings from my sketchbook that I did while i was in New York.
The first one is from back stage at the show. 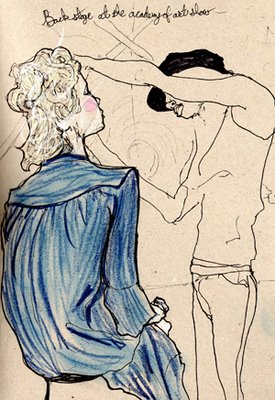 My brother in Bryant Park. 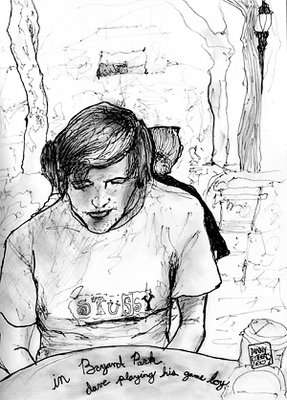 The next two are from my Lily Cole and Gemma Ward sketchbook that I drew out there. 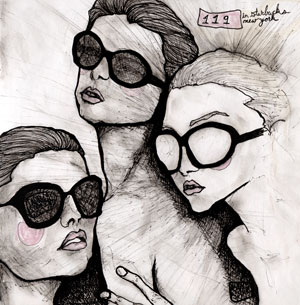