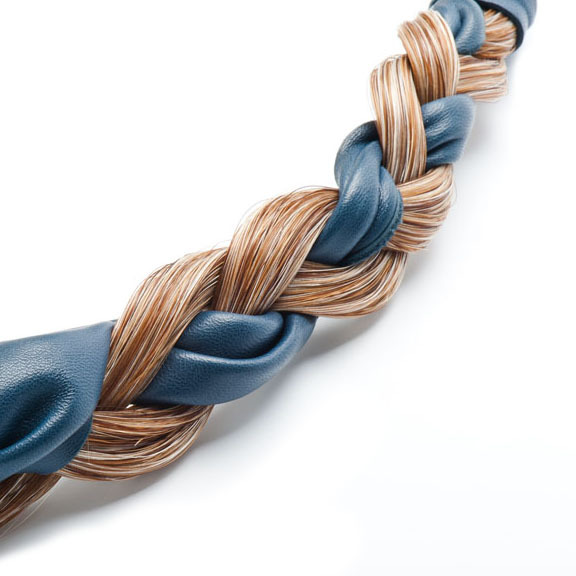 Elizabeth Prost: Not Horsing Around

Elizabeth Prost is one of those people that goes out and gets what she wants. After graduating from Academy of Art University in 2010, instead of going to New York or finding an internship, she took a slightly different route to finding her dream job. She knew a footwear designer she admired would be at an upcoming party, and so she set off to attend the party, make a connection with her idol and hopefully have an inroad to a job at her company. They hit it off and Elizabeth landed a job designing footwear. Fresh out of the Academy Elizabeth had a top-notch opportunity helping design shoes and attending leather shows in Bologna.

Fast-forward a couple of years, and now Elizabeth has a new job, but this time she’s working for herself. She has her own brand of accessories, The Golden Pony Workshop, which features authentic horsehair key chains, necklaces, and statement earrings.

While she gets her business off the ground, Elizabeth moonlights as the manager at Gimmie Shoes. Unlike her day job, her work on her business never seems to end. A normal day in the life of this accomplished designer includes perfecting nautical knots during slow time during her day job, working on her website and preparing for upcoming sales, answering text messages for orders at all hours of the day, and trying to master the art of tie dying leather.

It’s hard to imagine this girl has time for anything else, though she admits to having a weakness for shopping. This vice comes in handy though—when the salespeople at Neiman Marcus and Saks ask her where she got her jewelry, she can say what aspiring designers all over the world dream of saying, “This is one of my designs.”

I sat down with Elizabeth to get a little bit more insight into her line, her unique materials, and her experience at the Academy.

Tess Collins: Why Horsehair?
Elizabeth Prost: I love raw materials; I’ve always loved leather and architectural hardware, nothing too fancy or over the top. In school, when I was doing my senior collection, I had to work with a lot of horsehair canvas for interfacing. When I was researching the canvas, other things would pop up and I would see that you could purchase horsehair, so I bought some and it sat around in my apartment until I made a piece with it. It’s fun because it’s something that nobody else works with; it’s very unusual. People either love it or they hate it.

TC: Do you ever feel boxed in by your trademark horsehair jewelry?
EP: I definitely want to create other things, but I like the horsehair. I don’t consider myself boxed in by it; I am trying to figure out where I can go with it next. I still want to keep it the main focus of any piece I do, whether it’s a necklace or a bag. I still want it to be the main attraction.

TC: When you were at the Academy, what was the best piece of advice that you got?
EP: I can’t remember a specific piece of advice, but I do remember an instructor, who actually doesn’t teach there anymore, Jonathan Kyle Harbor, who was the most incredible person I’ve ever met. He just completely inspired me and pushed me to grow in ways that I didn’t know that I was capable of. A lot of the instructors at the Academy of Art University do things differently, and that’s what is so great because it makes you think outside of the box. I’m not a traditional artist, and Mr. Harbor really helped me figure out my illustration style.

TC: Where do you see yourself in five years?
EP: I don’t know about five years, but my dream right now is to get a studio space with maybe a storefront. I’d love to go in on it with a couple of my friends who are also artists and do a collective sort of thing. Right now, my work is only being sold in San Francisco; it would be nice to branch out and reach some other spots. I would love to have my own space.

TC: Have you ever had an “I’ve made it” moment?
EP: There’s just been a huge flood of stuff happening right now, so that kind of happened recently! It started when a girlfriend of mine who is a stylist at the Academy got her first print gig in SOMA Magazine and she used one of my pieces. After that I was approached by One King’s Lane—they told me they loved my stuff and wanted to do a special artisanal sale with my work. At the same time, I got an e-mail from Sheryl Locke, who used to work at the Academy and is now at 7×7, saying she wanted to feature me in an up and coming artist issue!

TC: If you could give one piece of advice, what would it be?
EP: Don’t lose sight of your original dream. Don’t be afraid to take it in a different direction, but don’t let the industry or people change what you wanted. Take it slow. Nobody really gets hired right out of school to be the assistant for Marc Jacobs; it actually doesn’t really work that way. Work your way up. We’re lucky in this city that the startup culture is strong, and that it’s easy to be able to get something off the ground.