Bryanboy sits front row – in the style of Danny Roberts 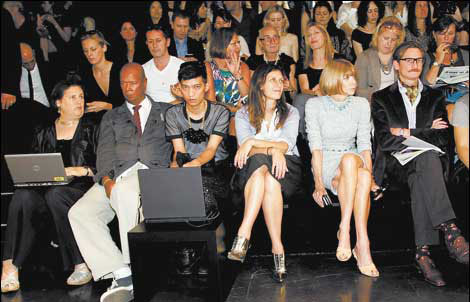 Bryanboy (centr, with computer), sits between, from left, Suzy Menkes of the Herald Tribune, Michael Roberts of Vanity Fair and US Vogue’s Sally Singer, Anna Wintour and Hamish Bowles, at D&G’s spring/summer 2010 show in Milan

Yes, that is friend of the Academy of Art University Suzy Menkes sitting there as well.

Bryanboy is just one of the many fashion bloggers making a name for himself in the industry. Tavi, the 13-year-old fashion prodigy has been making waves in the biz with her blog Style Rookie and Scott Schuman has been doing it for years as The Sartorialist.

And let’s not forget Fashion School Daily – we know how to throw down as well.

Check out the story about fashion bloggers in the Financial Times and make sure you give love to Bryanboy, Danny Roberts and Tavi’s blogs!